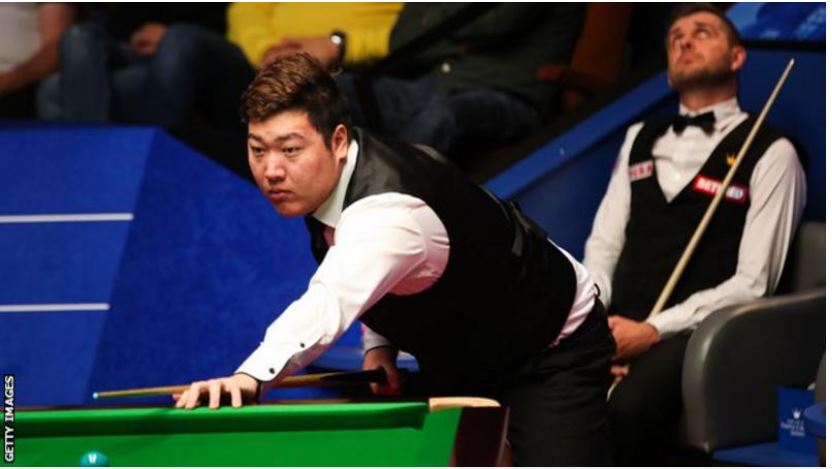 Defending champion Mark Selby was knocked out of the World Championship by Yan Bingtao after a match featuring the longest frame in Crucible history.

An epic slugfest ensued in the 22nd frame, lasting 85 minutes and 22 seconds, beating the previous longest by five minutes and 51 seconds.

Yan, 22, will face three-time champion Mark Williams, 47, in the next round.

Leicester’s Selby spoke openly about his struggles with mental health issues after a heavy defeat at the Masters and had considered not defending his title in Sheffield.

He said he had seen “a little bit of improvement” which helped his decision to enter the World Championship but ultimately a difficult campaign ended without any silverware for the first time since 2008-09.

Selby is known for his grit and determination, grinding down opponents in long drawn battles, but on this occasion he was on the receiving end of Yan’s mental and tactical fortitude.

The 22nd frame will go down in history, a lengthy exchange that ended with Yan pinching it on the final black, securing the victory with a superb century.

“A very long frame, one and a half hours,” said Yan. “All the reds were on the cushion and we could only break out single reds.

“He had a very good chance but he missed the last pink and he was feeling the pressure and was nervous. He gave me an easy chance and at 12-10 I just needed one more chance.”

Asked if he can go all the way and win the title, Yan replied: “Maybe, who knows. If I play like the last frame I will win.”

Selby, who had knocked in successive breaks of 86, 117 and 88 to battle back from 11-7 down, told BBC Sport: “Yan is just a great all-round player, you have to beat him, he doesn’t give anything to you. You have seen that from start to finish and he plays some very clever shots. I have a lot of respect for him.

“I wish I was as good at his age. For me, he has the game to go on and win it. Here, to not be scoring and not be at your best, you have to scrap it out and he showed that.”

The longest frame in a professional match is 123 minutes and 41 seconds, set by Fergal O’Brien and David Gilbert in the final qualifying round at the 2017 World Championship.

Elsewhere…
Former champion Judd Trump struggled to a 4-4 draw against Scotland’s Anthony McGill after the first session of their second-round match.

Trump, winner in 2019, and McGill made a century apiece in an otherwise scrappy encounter which lacked any real fluency.

Tournament favourite Neil Robertson and England’s Jack Lisowski are also tied at 4-4 with both matches resuming on Sunday afternoon.