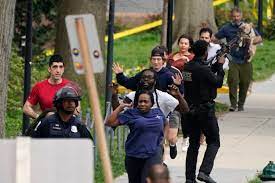 It wasn’t immediately clear if the suspect was Raymond Spencer, 23, who authorities identified earlier as a person of interest. Contee said authorities were no longer looking for Spencer, but he said he would not name the suspect until after his family is notified.

Contee said the suspect had a tripod pointed from an apartment on Connecticut Avenue on Friday afternoon when he opened fire.

Authorities found multiple rounds of ammunition and six guns at the home, including several long guns and handguns, he said.

“Obviously his intent was to kill and hurt members of our community,” Contee told reporters.

He added that a possible motive remained unclear. Police earlier Friday counted at least three victims in the shooting near the city’s Embassy Row area, but later said a fourth reported to officers at the scene.

Three of the victims — a 12-year-old girl who was shot in the arm, a woman in her mid-30s and a 54-year-old man — were stabilized, Assistant Chief Stuart Emerman said.

A woman in her mid-60s with a graze wound to her upper back was treated at the scene and released, he said.