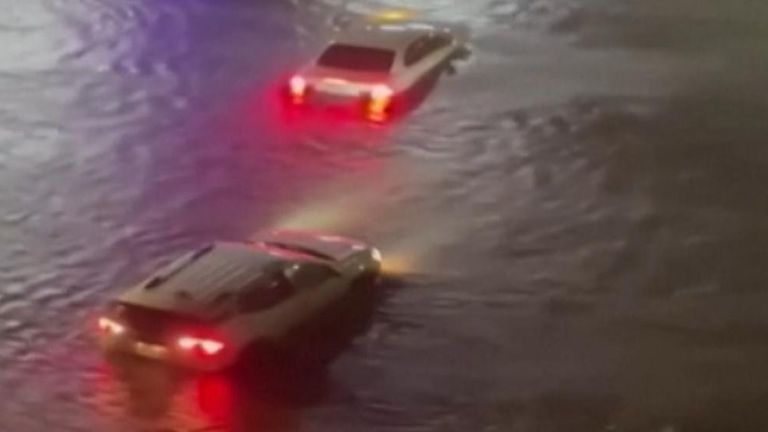 A state of emergency has been declared in New York and New Jersey amid catastrophic flooding that has killed at least nine people, including a two-year-old boy. Record rainfall has also been recorded in Central Park and downpours are expected to continue for several hours.

At least nine people have been killed after Storm Ida dumped a month’s worth of rain on parts of the US.

States of emergency were declared in New York and New Jersey as the remnants of a hurricane sparked flash floods that forced New York City to suspend its subway services.

Last night, the city suffered its wettest hour on record, with more than 80mm of rain falling in Central Park in the space of 60 minutes.

The casualties include three men, three women and a two-year-old boy, who died in four separate flooding incidents in New York City, police said.
The toddler was found dead inside a home, along with a 50-year-old man and 48-year-old woman.
US weather news latest: New York City suffers wettest hour on record as Storm Ida hits – with state of emergency declared
Hurricane Ida may not have been as devastating as feared but a different crisis is playing out for many people

The city’s fire department said it responded to a report of flooding in Queens shortly after 11pm and one person taken from the building was pronounced dead.

Another victim in Passaic, New Jersey, was found dead in a vehicle that went underwater when it was caught in flooding near the Passaic River, according to the town’s mayor.

The National Weather Service said Wednesday was the first time it had issued a “flash flood emergency” for New York City.
New York City suffered its wettest hour on record last night
The term is used for exceedingly rare situations in which flash flooding is posing a severe threat to human life and causing catastrophic damage – or will do so soon.

He urged people to stay off the streets, saying: “If you’re thinking of going outside, don’t. Stay off the subways. Stay off the roads. Don’t drive into these heavy waters. Stay inside.”

The extreme weather seemingly failed to deter some people from ordering food deliveries as video appeared to show a worker wading through knee-high waters on a bicycle.

When Ida made landfall in Louisiana as a hurricane at the weekend, it left the city of New Orleans without electricity and caused huge amounts of damage.

The latest wave of devastation caused by the storm comes as the UN warned that weather disasters are striking the world four to five times more often and causing seven times more damage than in the 1970s.