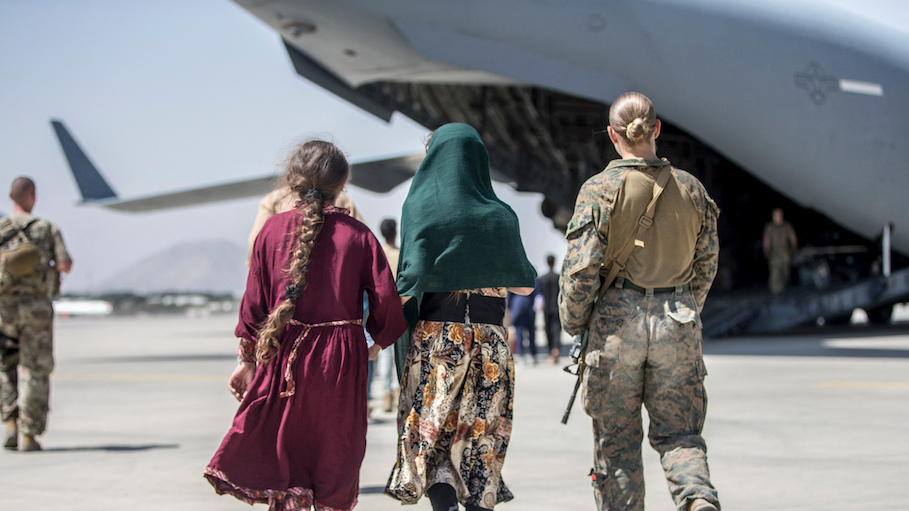 Reports and video circulating on social media, appear to indicate that the blast was the result of a rocket hitting a house close to the airport.

Whether there have been any casualties remains unclear.
BBC Pakistan and Afghanistan correspondent, Secunder Kermani cites the Afghan Health Ministry saying there’s been another blast near Kabul airport.

The exact location and cause of the blast are as yet unconfirmed but I’ll be keeping you updated.

US president Joe Biden has been travelling to Dover Air Force Base in Delaware to honour members of the US military killed in a suicide bomb attack during the evacuation of civilians from Kabul airport last week.

Biden was expected to receive the service members’ remains that were being flown back to the US. Families of those troops were also expected to be present.

The killing of Fawad Andarabi was reported by the Associated Press news agency, which said the Taliban had previously came out to his home and searched it, even drinking tea with the musician.

We reported earlier that a former Afghan minister had also tweeted about the killing.

But his son Jawad Andarabi told the AP that something changed on Friday. “He was innocent, a singer who only was entertaining people,” his son said. “They shot him in the head on the farm.”

His son said he wanted justice and that a local Taliban council promised to punish his father’s killer.

Taliban spokesman Zabihullah Mujahid told the AP that the insurgents would investigate the incident, but had no other details.

Andarabi played the ghichak, a bowed lute, and sang traditional songs about his birthplace, his people and Afghanistan as a whole. A video online showed him at one performance, sitting on a rug with the mountains of home surrounding him as he sang.

The UK’s former ambassador to Afghanistan has poured scorn on suggestions that the Taliban have “changed”, but insisted that the UK would have to engage with them.

Sir Nicholas Kay, ambassador to Afghanistan from 2017 to 2019, told Times Radio he had first encountered the Taliban in early 1995, shortly after they captured Kandahar.

“I don’t think they’ve changed. You know, I think you know, one of their strengths, if you like, is their single-mindedness and their strength of conviction and their faith in what they are doing and their cause,” he added.

“What we have seen is that they are more aware of what they should be saying, and maybe that will translate into being able to actually do some of the things that they’re saying.”

This is Ben Quinn picking up the blog for a while now while Alex takes a break.
Alex Mistlin here on the Guardian’s Afghanistan live blog. I’ll be bringing you updates here as they come in.

Some of the top stories coming out of the country and around the world:

The US remains on high alert for another possible terror attack at Kabul airport and has warned citizens to leave the area immediately. The US embassy in Kabul issued a warning of a ‘specific, credible threat’ on Saturday.

The Taliban and the departing US forces are aiming for a swift handover of Kabul airport, a Taliban official told Reuters on Sunday. “We are waiting for the final nod from the Americans to secure full control over Kabul airport,” the official said on condition of anonymity.
The final plane carrying British troops has arrived at RAF Brize Norton. In a video uploaded to Twitter this morning, Boris Johnson praised the more than 1,000 military personnel, diplomats and officials who took part in the operation in Afghanistan.

The Russian ambassador to Kabul, Dmitry Zhirnov, has said the Taliban could take over the Panjshir province within hours. Panjshir province in the north-east of the country has emerged as a centre of resistance to Taliban rule in recent weeks.

France and Britain will submit a resolution to an emergency United Nations meeting due Monday on Afghanistan proposing a safe zone in Kabul to protect people trying to leave the country, French president Emmanuel Macron said.
Taliban fighters patrol a street in Kabul.

Pope Francis called on the world’s Christians to pray and carry out fasting to ask God to bring about peace and coexistence in Afghanistan.

Speaking to pilgrims and tourists in St. Peter’s Square for his weekly blessing, Francis said he was following events in Afghanistan with “great worry” and was participating in the suffering of those mourning the dead in last Thursday’s suicide bombing at Kabul airport.

He also said he was close to “those who are seeking help and protection”, an apparent reference to those trying to leave the country.

“I ask all to continue to help those in need and to pray so that dialogue and solidarity can bring about a peaceful and fraternal coexistence that offers hope for the future of the country,” he said.

Pope Francis waves to faithful from his studio’s window overlooking St. Peter’s Square in the Vatican. Photograph: Gregorio Borgia/AP
Amid bitter recriminations between government departments over who was to blame for leaving behind thousands of people with links to the UK, a former head of the British Army questioned why ministers had not engaged earlier on the safety of Afghan allies.

Gen Lord Richard Dannatt said: “On the particular issue of those who we knew were in danger, people who had worked for us, interpreters, former locally engaged civilians, this issue has been in the media,” he told Times Radio.

He said it was “unfathomable” that the UK government appeared to have been “asleep on watch” when it came to ensuring the safety of Afghans who helped soldiers and officials.

The UK’s ambassador to the country, Sir Laurie Bristow, was among those who arrived on Sunday morning at RAF Brize Norton in Oxfordshire.

The Taliban is particularly concerned about the south entrance of the airport, which is the main entrance protected by the armed group, as well as the northwestern corner of the airport, Bellis said.

The Taliban said they were incredibly worried about this ISIL threat. They had pushed people back, they had put barbed wire across the road to try and stop anybody getting close and trying to disperse the crowds.

The British ambassador to Afghanistan, Sir Laurie Bristow, has posted a video from RAF Brize Norton in which he says “we will do everything we can to protect the gains of the last 10 years and above all to help the Afghan people achieve the peace ands security they deserve”.

He restated his commitment to “British nationals and Afghans who still need our support and we will putting pressure on the Taliban to ensure safe passage for these people”.

He said the embassy would operate from Qatar for “the time being”.

Fears are growing for a group of Afghan refugees who fled the country last month only to find themselves marooned on the border between Poland and Belarus in a “Kafkaesque” political standoff.

The 32 refugees – women, men, and a child of 15 years old – have been stuck in a small, muddy patch of land between the two countries for almost three weeks with no access to clean water, insufficient shelter and intermittent food supplies, according to a Polish NGO.

They are not being allowed in to Poland, with border guards preventing them from entering. Neither are they being allowed back into Belarus, where they came from in the hope of being able to cross into the European Union.

You can read the full report from Lizzy Davies below:

Fears grow for Afghan refugees stuck in ‘Kafkaesque’ Poland-Belarus standoff
Further to the news that girls and boys will no longer be able to study together in universities in Afghanistan.

The chairperson of Afghanistan’s independent human rights commission (HRC), Shaharzad Akbar, has called on world governments to hold the Taliban to account on women’s rights.

Taliban will make every effort to deny women their fundamental human rights. The world should not look away & or be delusional about this. We have to explore every opportunity & leverage to protect women’s human rights & hold Afg accountable to its international commitments https://t.co/ZHLcENRKE0

To recap the state of play in Afghaistan:

The US military has entered the final phase of evacuations from Kabul. Taliban officials say they are ready to take over airport pending the “final nod” from US forces.

Just over 1,000 civilians at the airport remain to be flown out before troops withdraw, a Western security official said on Sunday.

US president Joe Biden vowed to keep up airstrikes against the Islamic extremist group, ISKP, whose suicide bombing at the Kabul airport killed at least 170 Afghans and 13 American service members.

Masoud Andarabi, the former minister of interior for Afghanistan, said the musician Fawad Andarabi has been “brutally killed” by the Taliban.

The nationally famous artist was allegedly dragged out of his home and shot by Taliban forces.

Andarabi said the killing took place in Andarab, in the southern part of Baghlan province.

Pajhwok, Afghanistan’s largest news agency, reports that the Taliban has banned the airing of music and women’s voices in Kandahar province.

Operation Herrick, codename for the British contribution to the war in Afghanistan, largely operated in Kandahar and Helmand provinces.

Former officials and lecturers at Afghanistan universities have called on the Taliban to maintain and upgrade the country’s education system instead of creating a new one, AP reports.