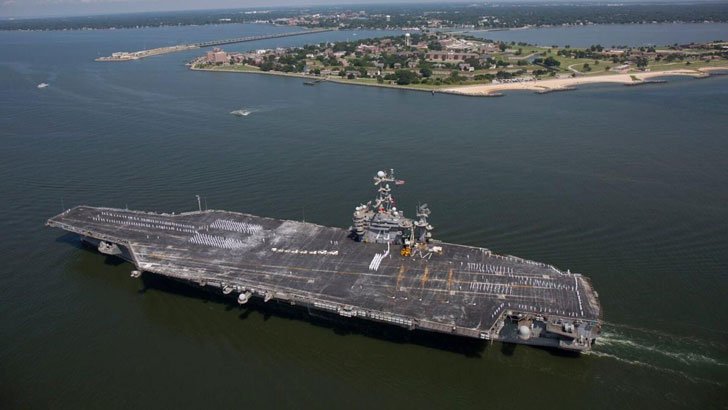 A US defense official, speaking on condition of anonymity, told the Associated Press that USS Harry Truman and five other US warships were scheduled to sail from the Mediterranean to the Persian Gulf. However, these ships need to be present near European shores to reassure allies. That’s why the U.S. government has ordered the fleet to be stationed in the Mediterranean.

Moscow has deployed 100,000 troops along Russia’s southern border with Ukraine. The United States and its Western allies have claimed that Russia has deployed troops inside Ukraine with the aim of conducting military operations.

Russia, however, says that as a sovereign state, Russia has the right to deploy troops anywhere on its territory. No one’s permission is required for this. Moscow claims that these troops were not deployed to carry out military operations in Ukraine.

The USS Truman left Norfolk, Virginia on December 1. On 14 December it entered the Mediterranean. The warship was supposed to be in the Gulf. But the United States is keeping it in the Mediterranean because of tensions with Russia.

Russia’s occupation of Crimea in 2014 and an armed uprising in Ukraine’s ethnic Russian-dominated Donbass region have strained relations with Russia over the past seven years. Many observers say the tide is turning dangerous day by day.

China has warned that it will take strong action against Taiwan if it moves towards independence. Beijing says tough action will be taken against Taipei if it crosses the Red Line.

Ma Xiaoguang, a spokeswoman for the State Council’s Taiwan Affairs Office, told a regular news briefing in Beijing on Wednesday that “if Taiwan’s separatist forces provoke independence, try to show strength or cross the Red Line, we will take strong action.”

The Chinese official said Taiwan’s separatist activities and outside interference could increase in the coming months. Next year the situation on the Strait of Hormuz will become much more complicated and heated.

Ma Xiaoguang said Beijing would try to reunite peacefully with Taiwan. But if they cross any red line like declaration of independence then necessary action will be taken.

The US government has increased its military spending by 5 percent. The United States will spend 60 billion on the military in 2022. President Joe Biden signed a bill Monday. More than half of the increased spending will be on military enrichment, warplanes and warship procurement. The White House has confirmed this.

The bill, called the National Defense Authorization Act, 2022, or NDAA, to strengthen the US military, was introduced in early December in the lower house of the US Congress, the House of Representatives, and the upper house, the Senate. The bill was then passed with overwhelming support from MPs from both the Republican Party and the Democratic Party.

The bill became law with the signature of Joe Biden. In a statement after the signing ceremony, Biden said the law was “very useful” for strengthening the country’s military. The new law also ensures justice for members of the U.S. military and their families, and their support for the national defense, which is critical of the government.