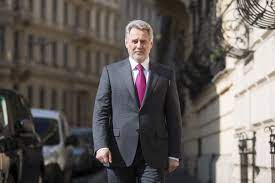 A Ukrainian oligarch who made his fortune with help from the Kremlin is now denouncing Vladimir Putin, even as he fights extradition to the U.S. on corruption charges.

In an exclusive interview with NBC News while under house arrest in Austria, billionaire Dmytro Firtash said the Russian president cannot win in Ukraine.

“He is never going to come out victorious,” said Firtash, who became fabulously rich selling Russian natural gas to Ukraine with the help of powerful Russian interests. “No matter what happens, Russia will lose.”

If he could, Firtash said he would tell Putin: “It’s time to stop. There will be no victory. The longer this war takes, the worse it will be for the Russian people. Not just for the Ukrainian people.”

Firtash’s comments came after the Russian banking tycoon Oleg Tinkov last week denounced what he called Moscow’s “massacre” in Ukraine and urged the West to help end “this insane war.” Other oligarchs, including Oleg Deripaska, have called for an end to the war without directly criticizing Putin.

Critics will note that Firtash’s break with Moscow may align with his current interests, given that the U.S. Justice Department is trying to extradite him to face charges of a conspiracy to pay bribes in India while seeking a deal to supply specialized metal for Boeing’s 787 Dreamliner.