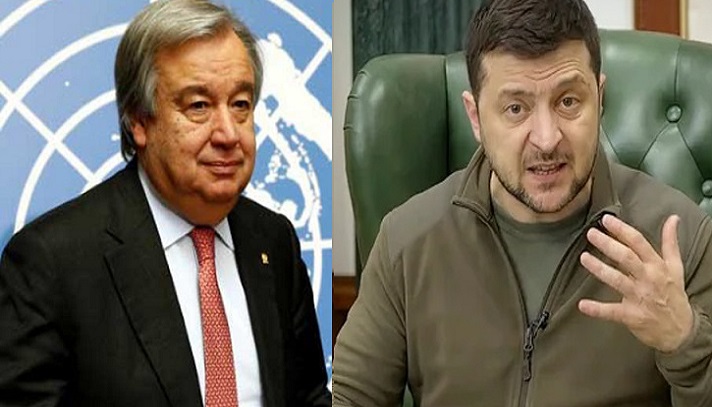 UN Secretary General Antonio Guterres is visiting Moscow and Kiev almost two months after the Russia-Ukraine war. He is scheduled to visit Moscow next Tuesday. The UN secretary general is scheduled to travel to Kiev on Thursday to discuss the same issue. But before Kiev, Ukrainian President Volodymyr Zelensky criticized Guterres’ decision to visit Moscow.

“There is a war going on in Ukraine,” Zelensky said. There are no bodies on the streets of Moscow. It would be logical to come to Ukraine first to see the suffering of the people and the consequences of the Russian occupation.

Zelensky also expressed interest in holding a meeting with Russian President Vladimir Putin in an effort to “end the war.” “I want to meet with him so that the ongoing dispute can be resolved through diplomacy,” he said. We have confidence in our allies, but not in Russia. ”

Ukrainian President Volodymyr Zelensky, meanwhile, told a news conference that what could happen would force Kiev to withdraw from peace talks with Moscow.

Zelensky was asked at a news conference at a Kiev metro station on Saturday, local time, during Russia’s military operation in Ukraine, how Kyiv would respond to a possible independence referendum in areas controlled by Russian forces.

In response, Zelensky said, “If our people are attacked in Mariupol, if a referendum is held in any part of Ukraine, Ukraine will withdraw from any negotiation process.”

The United Nations has been playing a key role since Russia’s invasion of Ukraine on February 24. Antonio Guterres sent a letter this week to negotiate a ceasefire.

Russia’s aggression in Ukraine is thought to have caused a rift between the United States, France, Britain, China and Russia, the permanent members of the UN Security Council, and the UN Secretary-General’s move to address it. Although the West continues to try to weaken Russia, China has not yet directly condemned Russia’s aggression.

Earlier, on March 26, Guterres had a brief telephone conversation with Ukrainian President Zelensky. Meanwhile, Russian President Putin did not respond to Guterres’ phone calls or contact him after allegations that Russia violated the UN Charter by invading Ukraine.