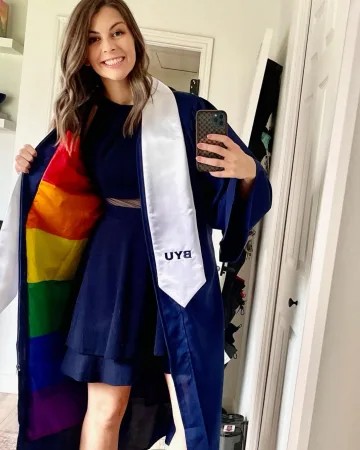 When Jillian Orr walked across the graduation stage at Brigham Young University Friday, she wasn’t just there to get her diploma. She was there to send a message.

The psychology major, who is bisexual, opened her graduation gown to reveal a rainbow flag underneath.

BYU, which is owned by The Church of Jesus Christ of Latter-day Saints, restricts LGBTQ students from dating or showing signs of affection while enrolled at the university. Students who do so can be reported to school officials and are at risk of being expelled.

Orr, who was raised in the church and served an 18-month church mission in Oregon, said she didn’t realize until she was halfway through her education at the university that she was bisexual.

“I started to realize my actions and beliefs were not lining up, and there was a lot of preconditioned shame and guilt around it,” Orr, 28, said. “But I came to the realization that this is who I was and it was beautiful.”

She chose to stay at BYU because of its strong psychology program and affordable tuition, and said that soon after realizing she was bisexual, the pandemic hit and classes went remote.

“It was a blessing,” she said of not having to be on the campus during that time, but added that the last two semesters of school were challenging. She specifically recalled how she had to take a class about marriage and family to fulfill her general education requirements. In one of the quizzes, she was asked to fill in the blank.

“It said, ‘One who truly loves LGBTQ people will “blank,”‘ and it goes through options. The answer I chose was to ‘love them unconditionally and accept whatever they want as what’s best for them’ and I got it wrong.”

She shared the quiz on TikTok Monday, calling it the most “homophobic thing I’ve seen at BYU.”

BYU did not respond to a request for comment on the quiz or Orr’s graduation gown.

In the days leading up to Orr’s graduation ceremony, her younger sister asked her what she was going to wear and suggested having a rainbow flag underneath the gown that she showed off on stage.

“She knew I wanted to honor what I’d been through and what I had to face,” she said.

Her older sister stitched the flag in her gown while another sister drove down from Montana for the ceremony after hearing what Orr planned to do.

On Friday, as she saw her fellow students stand up and make their way toward the stage, her nerves started to set in.

The last thing she remembers is handing her name card to the announcer, she said. For the rest of the audience, they saw Orr walk across the stage and raise her arms up, revealing the rainbow flag underneath as the announcer read her name.

“I swear I blacked out. I texted my sister and said, ‘What happened? Did I just do it?’”

When she was walking out of the auditorium later, a fellow graduate ran up to her to tell her that her girlfriend saw what she did on live TV and was so proud of her.

“I impacted another graduate who just got out … who felt like she had to hide,” Orr said.

Later that day, she shared a photo of her robe and ceremony on Instagram before taking a nap. When she woke up, “it had exploded.”

“It was going crazy,” she said of the Instagram post, which had been liked more than 9,000 times as of Monday afternoon. “That wasn’t my plan.”

Her graduation comes seven months after church leader Jeffrey R. Holland visited the Utah campus and recalled in a speech to students and faculty how one of the school’s former valedictorians, Matt Easton, came out as gay in his graduation speech in 2019.

“If a student commandeers a graduation podium intended to represent everyone getting diplomas in order to announce his personal sexual orientation, what might another speaker feel free to announce the next year until eventually anything goes?” Holland said.

“That was so infuriating,” Orr said of Holland’s speech. Her intent in showing her own sexual orientation on stage Friday “was to be seen and stand up.”

“I’m here standing with dignity,” she said, adding that she hopes other LGBTQ students at the school, some of whom may be hiding their sexual orientation, feel less alone.