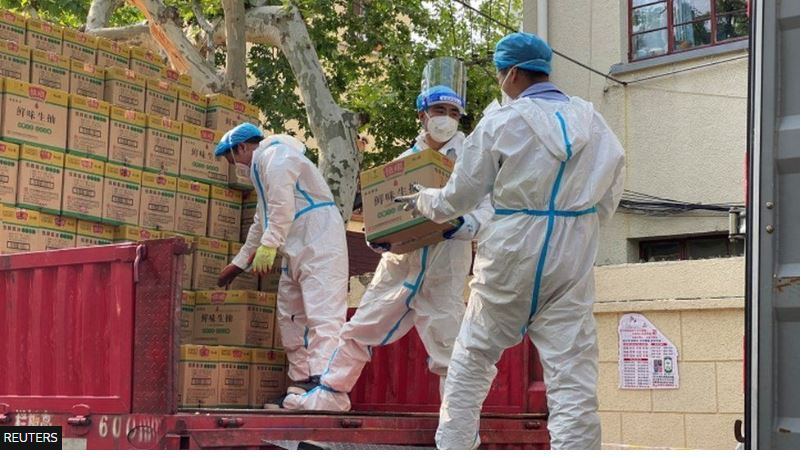 Chinese internet authorities are trying to block a popular video highlighting the impact of Shanghai’s five-week lockdown on its residents.

The clip features audio of citizens complaining about their conditions, lack of food and poor medical care.

Official attempts to remove it have triggered a backlash on Chinese sites.

Shanghai’s 25 million residents have been shut in their homes for weeks while officials try to contain a severe Covid-19 outbreak.

“We haven’t eaten for days now,” one person can be heard pleading.

“This virus can’t kill us. Starvation can,” another man says.

The video, titled The Voice of April, was being widely shared on the popular Chinese platforms Weibo and WeChat.

But on Saturday internet authorities began trying to take it down, battling with rebellious users who were posting new copies elsewhere on the sites.

It’s now five weeks since Shanghai’s population was first ordered to stay at home as part of an extremely strict lockdown.

The rules are intended by officials to contain the city’s latest Covid-19 surge – the most severe wave Shanghai has experienced to date.

Public criticism of government policies is rare in China, but in the past few weeks some Shanghai residents have posted complaints on social media sites about the poor conditions they were being kept in.

Some in locked-down areas of Shanghai have been struggling to access food supplies, and forced to wait for government drop-offs of vegetables, meat and eggs.

Other recently introduced measures include placing electronic alarms on doors to prevent those with the virus from leaving and forcibly evacuating residents to allow their homes to be disinfected.

Shanghai city officials have also ordered all infected patients and their close contacts to be transferred to government-run centralised quarantine.

In the viral clip, one woman can be heard complaining that “even the ceiling isn’t finished yet” at a temporary hospital she was being checked into.

“Once we arrived, everybody fought for a blanket and a bed,” she said.

Other residents shout out “thank you, big whites!” – a nickname for health officials kitted out in white protective gear while being deployed to Shanghai’s various neighbourhoods to enforce lockdown rules.

The attempt to censor the short video has itself caused a debate on Chinese social media, triggering a backlash among commentators.

On Weibo, one of the most popular sites, one user responded: “The video was just presenting raw facts. There is nothing provocative!”

“Its content is nothing new… But the fact of seeing that even that is censored, it bothers me,” another commentator wrote.

On Saturday, when censors began removing the video, Shanghai officials reported more than 23,000 Covid-19 cases and 12 more deaths in the city.

The Chinese government has pursued a zero-Covid strategy since the beginning of the pandemic, intended to keep the country completely virus free.

While officials managed to keep infection levels relatively low at the beginning of the pandemic, later lockdowns have struggled to contain the more transmissible variants of the virus that have since emerged.