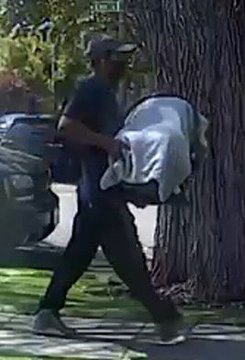 San Jose police said Tuesday that they have located a three-month-old baby who was kidnapped from an apartment Monday afternoon while his grandmother was unloading groceries from a car outside. Three suspects are now in custody and charges are forthcoming, police said.

The infant, Brandon Alexis Cuellar, was found alive and taken to the hospital as a “precaution,” police said. His family calls him Alexis.

Cuellar was found just a day after he was reported missing. San Jose police said Monday that he was being watched by his grandmother while his mother was at work, CBS San Francisco reports. The grandmother had taken the baby into the apartment when she got back from shopping for groceries. She went back to her car to retrieve more groceries but when she went back inside, Cuellar was gone.

San Jose police tweeted out images and video of a male suspect seen entering the residence and leaving with the baby in what appeared to be a carrier covered with a blanket. San Jose Police Department spokesperson Sergeant Christian Camarillo said Tuesday that the male suspect, who has not been identified, brought a baby carrier to the apartment, suggesting the kidnapping was planned.

Camarillo also said Tuesday that a woman who was with the grandmother has been identified as a person of interest. He said “inconsistencies” in what she told police drew “significant suspicion,” though she has not been charged and is not under arrest. He did not provide any additional details.

Police said his mother was at their headquarters providing information on the case. The baby’s father is currently incarcerated.

“Right now, we have every available resource not only out in the field, but here at the police department working this case,” Camarillo said Monday.

“She took the baby in the apartment, went downstairs to unload some groceries [and] in that short about of time, someone entered the apartment, you guys (reporters) have the images and the video of this person, and left with the baby,” he added.

Authorities were asking for anyone who lives in the area to check their surveillance cameras for video from around 1 p.m. that might have captured the suspect.

Police also noted that no Amber Alert had been issued in the case because authorities don’t have a vehicle description or license plate number to include with the alert.