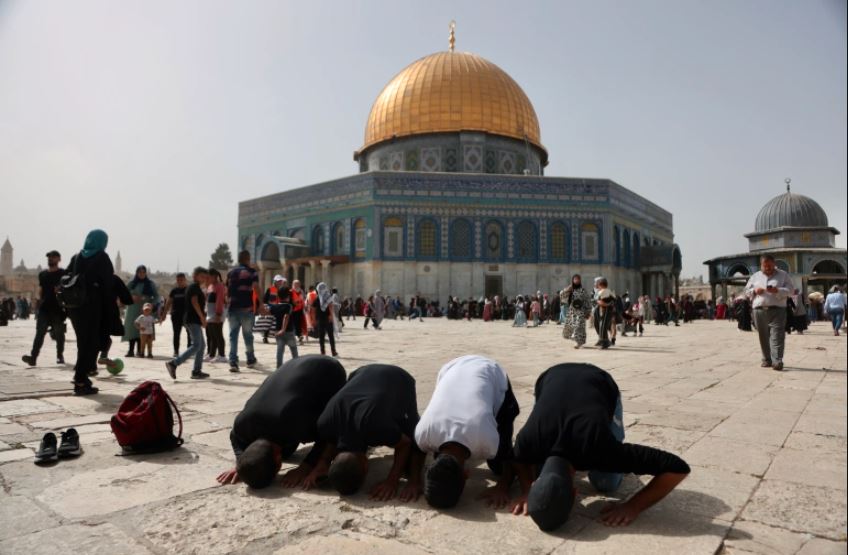 The wall divides the occupied West Bank, where Ahmad lives in the Aqabet Jaber refugee camp in Jericho, from occupied East Jerusalem.

But 20-year-old Ahmad does not consider the barrier to be insurmountable – he’d made the jump before, successfully.

Because of his age, and the fact that he is a Palestinian from the West Bank, Ahmad is unable to enter East Jerusalem. He would have to be over 50, or under 12, to get in on Fridays in Ramadan without a difficult-to-obtain Israeli army permit. Women of all ages are also allowed in on the same days. For the rest of the year, they are all also excluded.

Despite those restrictions, Ahmad and his friends will try to sneak in.

“[Going to Al-Aqsa is] deeply embedded in our hearts – it’s something that I can’t explain,” Ahmad told Al Jazeera. “This is holy land, and it is occupied. We go to pray, and the presence of the occupation itself is a reason for us to go,” he told Al Jazeera.

Ahmad and his friends left their homes in the camp in the eastern occupied West Bank just after midnight on Friday, and made it to the wall at 1am.
“We use a ladder to go up and we check out the other side. We throw down a rope and we go down slowly. When we get down to more than half, we jump,” Ahmad explained.

Ahmad and his friends had planned to be at Al-Aqsa at around 3am before dawn prayers, but they faced a problem – Israeli border police forces happened to be stationed at the other side of the wall from where they were planning to jump.

The Israelis confiscated two of the group’s ladders, according to Ahmad. But several hours later, they had another one.

By the morning, most of the young Palestinians attempting to make the jump had given up, and gone back home.

But Ahmad and his close friends spent a sleepless night waiting, and had their pre-dawn meal in a nearby restaurant, before starting their fast, and waiting for an opportunity.

“We’re tired because we haven’t slept since yesterday,” Ahmad said in the morning. “The army [police] won’t budge. We’ve been trying all night – we go up every once in a while to check.”

“We just want to break our fast at Al-Aqsa, even if we don’t make it for Friday prayers. We want to experience that moment. The shabab [youth] are adamant to go – they’re saying, ‘We don’t want to go back.’”

‘Walk with confidence’
Hundreds of Palestinians have jumped over Israel’s Separation Wall since its construction began in 2002 during the Second Palestinian Intifada. The eight-metre-high concrete wall is lined with military checkpoints, surveillance cameras and barbed wire.

Israel has claimed that the wall is for security reasons, and that it has reduced the number of attacks in Israel, but 85 percent of it falls deep inside the occupied West Bank and annexes with it large chunks of Palestinian territory occupied in 1967, including East Jerusalem.

Rights groups have classified Israel’s wall and the separation of the West Bank from East Jerusalem as an element of the severe restrictions imposed on the movement of Palestinians in the occupied territories.

For Palestinians like Ahmad, those restrictions mean that they are usually unable to visit Al-Aqsa, one of Islam’s holiest sites, and a national Palestinian symbol.

But Ahmad said he had never been stopped. One way to blend in: wearing a silver chain necklace on the outside of his shirt, which he said is the fashion among young Palestinian men in Jerusalem.

“I also try to copy the way that Jerusalemites talk – they are urban people,” he said between laughs, and mentioned that it was important to “walk with confidence”.

“The Old City is full of soldiers – of course, if they see you nervous, they may ask you about your ID. I walk like I’m a son of the city,” remarked Ahmad.

“This way, you basically don’t show.”

In the meantime, Ahmad explained that his family, like thousands of other Palestinians, have what is known as a “security ban”, and are not eligible for permits to enter Jerusalem or Israel.

Such military-issued orders are at times given to individuals who have served prison time or were involved in “security offences’” as well as their family members.

Despite not being able to travel into Israel legally, Ahmad still encounters Israeli forces, when they frequently raid the camp he lives in and arrest youths.

Ahmad also claimed that his eldest brother was once shot in the thigh with live ammunition during confrontations with the Israeli military.

All of this means that, for Ahmad, the idea of applying for a military permit, with such a low chance of success, is unpalatable.

For a while, Ahmad’s friends who had reached Al-Aqsa had not heard from him, and thought that he may have not made it across.

But, in the mid-afternoon, he arrived, happy, and relieved, to have made it through.

“It’s a very nice feeling to have entered after all that effort – I’m happy and I feel satisfied. I’m going to stay here until iftar,” Ahmad told Al Jazeera, from inside the Al-Aqsa Mosque compound.

“It was very worth it – I would have done more to enter,” Ahmad added.

“Anything we can do for Al-Aqsa, we do it. If I hadn’t gotten in, I would’ve kept trying – and I will keep coming back.”