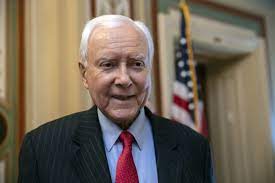 Hatch, who retired in January 2019 at the end of his last term, served in the Senate for 42 years, making him the longest-serving Republican U.S. senator.

He died surrounded by family, the foundation said. The cause of death was not released.

“Senator Orrin G. Hatch personified the American Dream,” Matt Sandgren, executive director of the Hatch Foundation, said in a statement. “Born the son of a carpenter and plaster lather, he overcame the poverty of his youth to become a United States Senator.”

Hatch was also the longest-serving U.S. senator in Utah history. He was first elected in 1976 and announced his retirement in January 2018.

He referred to his past as an amateur boxer in making the announcement, saying in a video: “Every good fighter knows when to hang up the gloves. And for me that time is soon approaching.”

Hatch was born in Homestead Park, Pennsylvania, in 1934.

Raised in what he’s called “a ramshackle house” during the Great Depression, Hatch went on to serve as chairman of three different Senate committees and put his stamp on major pieces of legislation across the policy spectrum.

Hatch graduated from Brigham Young University in 1959 with a bachelor’s in history, and a law degree from the University of Pittsburgh in 1962. He moved to Utah in 1969.