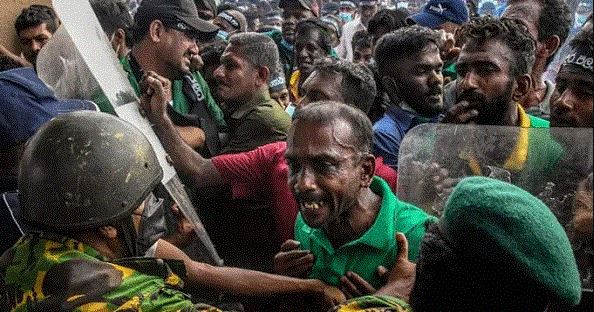 International Desk: Mass protests increase the likelihood of a government collapse in Sri Lanka. In the aftermath of the economic crisis, Sri Lankans surrounded Prime Minister Mahinda Rajapaksa’s residence to demand his resignation. (Sri Lanka Crisis) Thousands of students from various universities in Sri Lanka took part in the protest.

Sri Lanka has faced the most devastating economic crisis since independence in 1947. The country is in dire need of daily food and commodities. Commodity prices have skyrocketed due to the crisis in imports. Residents of the South Asian island nation have been without electricity for most of the day due to low tide in production. Long months of power outages, record inflation and severe food and fuel shortages have angered Sri Lankans. Many citizens are moving to India by crossing the Pak route.
Meanwhile, police in riot gear stormed a rally on Sunday, removing hundreds of protesters by truck. But the crowd broke the barricade. They surrounded the Prime Minister’s residence.

Police say Mahinda Rajapaksa was not at the residence during the protest. Every day for the past two weeks, thousands of protesters have been protesting outside the office of Mahinda’s younger brother and President Gotabaya Rajapaksa, demanding the resignation of the government.