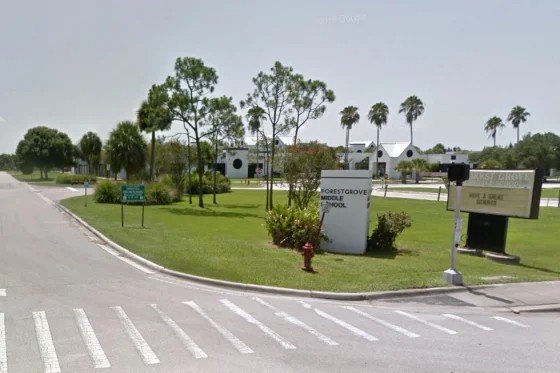 A former Florida middle school teacher accused of hitting a student with a broomstick has been charged with child abuse, officials said.

Cyntyche Darling Lundy, 49, of Port St. Lucie, was arrested Friday on a felony warrant of one count of child abuse against a student at Forest Grove Middle School, according to a statement from St. Lucie County Sheriff Ken Mascara.

“St. Lucie County Sheriff’s Office detectives began investigating child abuse allegations against Ms. Darling Lundy on Friday after learning that the former Forest Grove Middle School teacher had struck one of her students with a broomstick,” Mascara said. “The safety of our students on campus remains a top priority.”

Lundy, who was arrested by deputies in Palm Beach County, was booked into the county jail and released on a $5,000 bond, Mascara said.

Lundy could not be immediately reached for comment Tuesday.

St. Lucie Public Schools and its officials did not respond to an NBC News request for comment, but a district spokesperson told NBC affiliate WPTV of West Palm Beach that the alleged incident prompted Lundy’s termination.

“St. Lucie Public Schools is aware of serious allegations against a teacher. The school district is working closely with our local law enforcement partners. The alleged behavior is intolerable and reprehensible. As a result of the initial investigation, the teacher has been terminated,” the district spokesperson told WPTV. “This behavior represents a total disregard for SLPS’s mission to provide a safe and caring teaching and learning environment and such behavior is not tolerated.”

Lundy was using the broom when it broke and the student picked up a broken piece and ran with it.

Lundy then grabbed the broken piece from the student, which cut her hand and caused it to bleed, according to an arrest report obtained by the news outlet.

Lundy threw the broken piece at the student, missing him but breaking a computer screen, the arrest report said.

The report said Lundy “became angered by his behavior” and chased the student in the classroom, eventually pinning him between desks.

Lundy then allegedly hit the student with the broken broom handle three times, in the leg, arm and hand, NBC Miami reported.

In a statement to the school, Lundy called the incident “playful interaction,” NBC Miami reported.