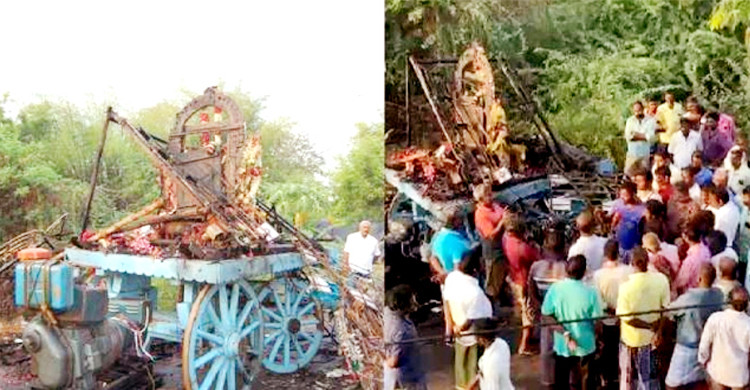 Eleven people have been electrocuted during a chariot procession in Tamil Nadu, India. There are two children in it. Another 15 people were injured. The tragic accident took place in the early hours of Wednesday (April 26) at Kalimedu village in Thanjavur district of Tamil Nadu.

According to the police, the procession of the chariot of Upper Madam Mandir of Kalimedu village came out in the morning. At that time the car of the chariot was involved in an accident and was completely burnt.

Police and eyewitnesses said Rath’s car veered off a turn and encountered some obstacles. Obstructed, the car started to overturn. When overturned, the chariot came in contact with a high-powered power line at the top and caught fire. At that moment, the people standing on the chariot got electrocuted and fell down. The casualties occurred. The injured have been admitted to a nearby hospital, police said.

As seen in a video, Rath’s car was completely destroyed as soon as he came in contact with the electric line.

Tiruchirappalli Central Zone IGP V Balakrishnan said a case had been registered in the incident and police were investigating.

A senior police official told NDTV that the traffic on the temple roads was usually cut off to avoid accidents. However, the car of this chariot was not so high, and at that time the electricity connection was not off. The idea is that the car was elevated by changing the structure, which is probably why the electric wire touches.