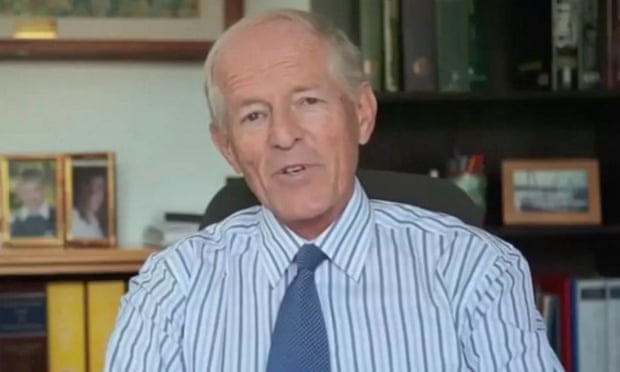 After five years of sadistic beatings in a garden shed by one of the UK’s most prominent barristers, and with a “special beating” to mark his 21st birthday imminent, Andy Morse tried to take his own life.

The student had endured thousands of lashes on his naked buttocks administered in the name of Jesus by John Smyth QC. He could no longer endure the pain, terror and humiliation.

Fortunately, his housemates broke down the bathroom door and called an ambulance. But Morse was not Smyth’s only victim. There are more than 100 known survivors, and perhaps many others: public schoolboys who took part in a network of military-style Christian holiday camps in the 1970s and 80s.A new book, Bleeding for Jesus, tells the story of Smyth, the moral crusader who fought legal battles for “Christian values” in Britain’s courts while allegedly mercilessly abusing young men at his Hampshire home, and the Iwerne Trust, which organised the “Bash camps” that were his hunting ground and which turned a blind eye to his activities.

“Smyth was, in effect, the Church of England’s Jimmy Savile,” said the book’s author, Andrew Graystone, who has worked with survivors of clerical abuse for several years. “We learned from Savile that abusers can only abuse in a culture that enables it.”

The Iwerne project, which Graystone describes as a cult, recruited “young men who were the brightest and best from the most elite schools in the country to win them for the Christian faith, to create a church of purity within the wider Church of England”, he said.

It produced many of the most prominent conservative evangelical leaders within the C of E over the past 40 years. Many see themselves as “the guardians of the true gospel against the forces of liberalism”.

According to the book, their number include Nicky Gumbel, the driving force behind the highly influential Alpha course run by churches all over the country; David Sheppard, who played cricket for England before becoming bishop of Liverpool, and several others who became bishops. Justin Welby, the archbishop of Canterbury, was briefly embroiled in Iwerne’s holiday camps in the late 1970s.

Smyth died in 2018 at his home in Cape Town, soon after Hampshire constabulary requested he return to the UK for questioning over abuse allegations. The former chair of the Iwerne Trust had left the UK after a secret report carried out by the trust in 1982 described “horrific” beatings of teenage boys, sometimes until they bled.

Winchester college, whose pupils were among the alleged victims, had been informed of the allegations, but neither the college nor the trust reported Smyth to the police. Instead, Winchester’s headteacher asked Smyth never again to enter the college or contact its pupils.

Smyth moved to Zimbabwe where he was accused of physically abusing boys at holiday camps he ran. He was charged with killing a 16-year-old boy at one of the holiday camps in 1992; the case was later dismissed. Smyth relocated to Cape Town.

The Iwerne Trust was eventually wound up and its activities were taken over by the Titus Trust, which last year reached a settlement with three men over abuse allegations and expressed “profound regret” for Smyth’s actions.

On Friday the Titus Trust issued a lengthy statement saying: “At times we have failed to show our concern for the victims and survivors of John Smyth’s abuse.” It said Smyth’s abuse should have been reported to the authorities in 1982, but “while we readily acknowledge that we have made mistakes, there has not been – as some have suggested – any cover-up on our part”.

However, it added: “We are deeply sorry for the additional pain that we caused for a number of these men and their families.”

Earlier this year Welby made a “full personal apology” to Smyth’s victims, saying: “I am sorry this was done in the name of Jesus Christ by a perverted version of spirituality and evangelicalism. I continue to hear new details of the abuse and my sorrow, shock and horror grows.”

He worked as a junior officer at the Iwerne holiday camps in the 1970s, but has said he was “completely unaware” of any abuse.

The C of E has ordered an independent review of its handling of allegations of abuse by Smyth, although publication has been delayed until next year.

Graystone said the Iwerne project, in line with most cults, relied on three pillars: conversion, conditioning and coercion. Recruits had to “declare total allegiance to Jesus”, follow certain codes and practices, and observe “sexual purity”. He said it was “highly exclusive – this was not a movement for the poor. It accrued huge amounts of power, influence and wealth.”

The impact of Smyth’s alleged abuse has been lasting. “Every victim is different but no one is unaffected. Some have battened down, put it in a box, and that in itself has consequences. Others wrestle with it every day of their lives.”

In response to the Titus Trust’s statement on Friday, Andy Morse said: “Although some of the content is difficult to consider, I’d like to thank Titus today. It is both human and humane of them to share their story rather than remain silent and fake perfection. I’m happy to continue the conversation.”

Bleeding for Jesus: John Smyth and the Cult of Iwerne Camps by Andrew Graystone will be published on 2 September.
In the UK and Ireland, Samaritans can be contacted on 116 123 or email jo@samaritans.org or jo@samaritans.ie. In the US, the National Suicide Prevention Lifeline is 1-800-273-8255. In Australia, the crisis support service Lifeline is 13 11 14. Other international helplines can be found at www.befrienders.org.
… we have a small favour to ask. Millions are turning to the Guardian for open, independent, quality news every day, and readers in 180 countries around the world now support us financially.

In these perilous times, a truth-seeking global news organisation like the Guardian is essential. We have no shareholders or billionaire owner, meaning our journalism is free from commercial and political influence – this makes us different. When it’s never been more important, our independence allows us to fearlessly investigate, challenge and expose those in power.