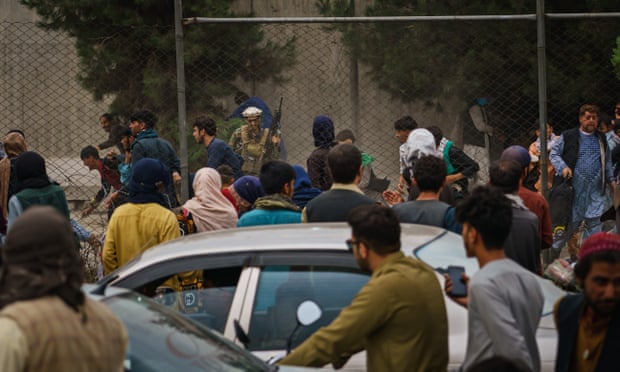 Taliban promises of “safe passage” to the Kabul airport for Afghans trying to flee the country have been undermined by reports of women and children being beaten and whipped as they try to pass through checkpoints set up by the militants.

With the Taliban in control of Afghanistan’s land border, Kabul airport is the only way out of the country. The US military has secured the airfield itself, after chaotic scenes over the weekend, but the Taliban control the road to the airport and have set up numerous checkpoints in Kabul’s north.

The US says the Taliban has committed to “safe passage” for people who want to reach the airport. But reports from the Afghan capital say there has been violence at checkpoints on Airport Road, including photographs of a woman and a child with head injuries after reportedly being beaten and whipped after trying to cross a checkpoint. Sources in Kabul told the Guardian the Taliban were checking documents and forcibly turning some people around at checkpoints, refusing to let them reach the airport.

On the day Kabul fell I refused to leave – I am not ready to give up on Afghanistan yet
Read more
The US national security adviser, Jake Sullivan, said that while significant numbers of people had been able to reach the airfield, now under US military control, “there have been instances where we have received reports of people being turned away or pushed back or even beaten … We are taking that up in a channel with the Taliban to try to resolve those issues. And we are concerned about whether that will continue to unfold in the coming days.”

Sullivan said keeping open routes to the airport was an “hour-by-hour issue … It’s something we are clear-eyed about and very focused on holding the Taliban accountable to follow through on its commitment.”

Advertisement
The White House said 13 flights on Tuesday airlifted 1,100 US citizens, permanent residents and their families from the Kabul airport and the pace was expected to pick up on Wednesday and through the week. A flight carrying evacuated UK nationals and Afghans landed at RAF Brize Norton in Oxfordshire at about 11pm on Tuesday night. Royal Navy Vice Admiral Sir Ben Key said British armed forces were working to evacuate about 6,000 people via Kabul. Australia flew 26 people out in its first rescue flight, said the prime minister, Scott Morrison, after Australian troops arrived to help with the evacuation.

Despite the Taliban posing itself as the country’s new regime, the Afghan first vice-president, Amrullah Saleh, said he remained in Afghanistan and declared himself the “legitimate caretaker president” after President Ashraf Ghani fled the country as Taliban insurgents took the capital. Saleh told a security meeting chaired by Ghani last week that he was proud of the armed forces and the government would do all it could to strengthen resistance to the Taliban. But then the country fell to the Taliban in days, rather than the months foreseen by US intelligence.

In a series of tweets on Tuesday, Saleh said that it was “futile” to argue with Joe Biden after the president decided to pull out US forces. Saleh called on Afghans to show that Afghanistan “isn’t Vietnam and the Talibs aren’t even remotely like Vietcong”.

Saleh said that unlike the United States and Nato “we haven’t lost spirit and see enormous opportunities ahead. Useless caveats are finished join the resistance,” he wrote online.

Saleh, whose whereabouts were unknown, said he would “under no circumstances bow” to “the Talib terrorists”. He said he would “never betray” Ahmad Shah Massoud, the leader of the Northern Alliance who was assassinated by two al-Qaida operatives just before the 9/11 attacks on the United States. The Northern Alliance was one of the main groups that fought the previous Taliban regime.

Pledges of support for Saleh were seen online from accounts claimed to belong to government soldiers, along with posts saying troops loyal to the memory of Massoud were converging on the north-eastern province of Panjshir to form a “Resistance 2” movement.

Elsewhere, Canada’s prime minister, Justin Trudeau, said he has no plans to recognise the Taliban as Afghanistan’s government, saying: “They have taken over and replaced a duly elected democratic government by force.”

The US Air Force meanwhile said it was investigating how civilians were killed as they tried to cling to an aircraft departing Kabul’s airport amid chaotic scenes. At least two people were filmed plummeting from an airborne C-17 transport on Monday, while there were videos and social media posts related to other possible casualties, said spokeswoman Ann Stefanek said.

She confirmed a body was found in the wheel well of the aircraft after it landed in Qatar. The examination “will be thorough to ensure we obtain the facts regarding this tragic incident. Our hearts go out to the families of the deceased.”

Stefanek said the aircraft had landed to deliver equipment to support the evacuation of US and Afghan civilians from Afghanistan. “Before the air crew could offload the cargo, the aircraft was surrounded by hundreds of Afghan civilians who had breached the airport perimeter,” she said. “Faced with a rapidly deteriorating security situation around the aircraft, the C-17 crew decided to depart the airfield as quickly as possible.”

The White House acknowledged the Taliban had amassed a significant amount of US military equipment. Pictures and videos have shown the Taliban with firearms and vehicles that Pentagon troops used or provided to the Afghan national security forces, as well as advanced UH-60 Black Hawk attack helicopters and other equipment at the Kandahar airport.

“We don’t have a complete picture, obviously, of where every article of defence materials has gone. But certainly, a fair amount of it has fallen into the hands of the Taliban,” said Sullivan.

“Obviously, we don’t have a sense that they are going to readily hand it over to us.”

Sullivan said losing control of millions of dollars worth of military supplies to an enemy was an example of “the difficult choices a president faces … in the context of the end of a 20-year war”.

He noted that the Black Hawks had been supplied to Afghan government forces to help battle the Taliban insurgency. But the government forces succumbed to the Islamist insurgents quickly, and gave up control of large stores of weaponry and their helicopters.