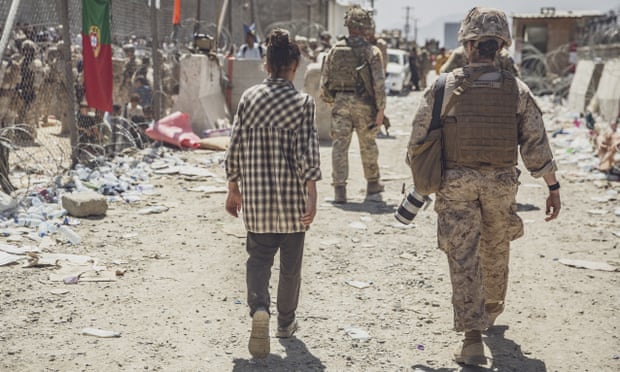 The UK’s final evacuation flight purely for civilians has left Afghanistan’s capital, Kabul, the Ministry of Defence has said.

Further flights which leave will have UK diplomatic and military personnel on board, it added.

The head of the armed forces, Gen Sir Nick Carter, said it was “heartbreaking” they had not been able to rescue everybody.

He said hundreds of Afghans eligible to come to the UK remained in Afghanistan.

A mass airlift has been under way since the Taliban took control of the capital, with a deadline of 31 August in place for foreign troops to leave the country.

The US has been running the airport in Afghanistan’s capital, where a suicide bomb attack on Thursday may have killed as many as 170 people – including two British nationals and the child of a British national.

It has not been confirmed whether he was one of the UK nationals referred to by the Foreign Office.

His brother Abdul Hamid said Mr Niazi been killed during the firing in the aftermath of the blast. He said his wife and two of his children were still missing.

Kabul airport attack: What do we know?
British nationals killed in airport bombing
‘Taliban killed my brother for protecting my family’
More than 1,000 UK troops were in Kabul helping to process departures at the airport at the height of the operation. Some have already left and the rest will depart over the weekend.

The British ambassador to Afghanistan, Sir Laurie Bristow, who remained at Kabul airport, tweeted that nearly 15,000 people had been evacuated but it was “time to close this phase of the operation now”.

He added: “But we haven’t forgotten the people who still need to leave. We’ll continue to do everything we can to help them.”

The BBC is not responsible for the content of external sites.
View original tweet on Twitter
1px transparent line
Chief of the defence staff Sir Nick told Radio 4’s Today programme: “[The evacuation] has gone as well as it could do in the circumstances… but we haven’t been able to bring everybody out and that has been heartbreaking, and there have been some very challenging judgements that have had to be made on the ground.”

He said the number of Afghans who were eligible to come to the UK but remained in Afghanistan was in the “high hundreds”.

He suggested some would not have wanted to take the risk of travelling to the airport – or been unable to – rather than it being down to “processing” issues.

But he added: “We are forever receiving messages and texts from our Afghan friends that are very distressing. So we’re all living this in the most painful way.”

He said those of them who hadn’t been able to leave via evacuation flights but were able to get out another way would “always be welcome in Britain”.

Those already evacuated include British nationals, as well as almost 8,000 Afghans eligible under the UK’s relocation scheme for those who worked for the UK government and other vulnerable individuals.

Chairman of the foreign affairs select committee Tom Tugendhat, who served in the military in Afghanistan, told BBC Breakfast he was “extremely sad” so many of his friends had been left behind and he was continuing to work to get people out of the country.

However, he said people should “forget” about trying to get to Kabul airport, due to the numerous dangerous checkpoints that have been installed along the motorways.

“We’re looking at different networks to get people into second countries, and then connecting them to high commissions and ambassadors of the United Kingdom, to get them to the UK safely,” he said.