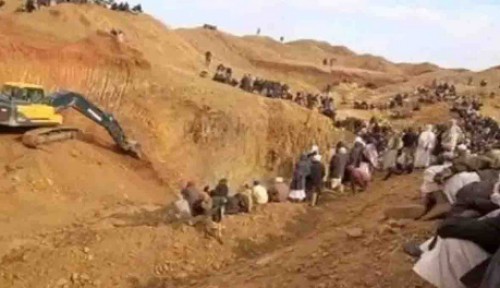 Online Desk At least 36 people have been killed after an abandoned gold mine collapsed in Sudan’s western province of Khordofan. Several people were injured in the incident.

The death toll from an abandoned gold mine collapse in the province rose on Tuesday (December 26th), the Associated Press reported.

An abandoned mine collapsed on Tuesday in the village of Fuja, 800 kilometers (435 miles) south of the capital Khartoum, the mining company said in a statement. It is said that many people were injured but they did not give any exact number.

According to local media reports, several ditches collapsed at the Darsaya mine. In addition to the dead, at least eight injured people were taken to a local hospital.

A photo of the crash on the mining company’s Facebook post shows at least two dredgers working to find possible survivors and bodies, and local villagers have gathered at the scene to witness the scene. Other images show people preparing graves according to the rules for burying the dead.

The agency claims that even though the mine is not operational, local miners return to work after security forces leave the area. However, it was not immediately clear when the mining was stopped.

Gold mine collapse is very common in Sudan. According to the media, almost all the gold mines in the country have collapsed due to unsafe standards.

Online Desk The highest number of corona patients has been identified daily in the United States and France. The news came after the outbreak of a new type of corona, Omicron, in both the countries. News from the BBC.

According to the US Centers for Disease Control and Prevention (CDC), 440,000 new corona cases were reported in the country on Monday (December 26). Officials, however, say the number could be higher as reports come in late for Christmas.

Meanwhile, a new type of corona, Omicron, has reached a climax in Europe. France has the highest number of daily infected patients in Europe. One lakh 60 thousand 606 people were newly infected with corona in the country on Tuesday (December 26) local time. The country’s health minister, Oliver Verran, had earlier warned that the number of daily infections could exceed 250,000 by the beginning of January.

The French Hospital Federation, an association of hospitals in the country, also warned that the most difficult time had not yet come. Although the incidence rate has been low in France for some time, coronavirus infections have been on the rise in France since December 4.

In the case of corona, the French health authorities last Friday recommended that adults take booster doses three months after receiving the two-dose corona vaccine. If you go to a cafe restaurant, you have to show Health Pass. In addition, wearing a mask is mandatory.

As of December 28, the coronavirus infection rate in Europe was 56 percent and in the Americas 30 percent, according to a report released by the agency on Tuesday.

Do not leave the city of Hubei in Wuhan Province, China in December 2019. Within a few months, the virus spread to most of the world. On March 11 last year, the World Health Organization declared Corona a “global epidemic.”

The virus then goes through an increase or decrease in infection for about 2 years. After the ongoing vaccination in different countries of the world, it came under control by the middle of this year. However, at the end of the year, a new type of tax, Omicron, has been launched. The new type of corona, Omicron, was first caught in South Africa. On November 24, the World Health Organization (WHO) confirmed the matter to the world. At the same time called for caution.

Online Desk The international charity Save the Children has claimed that two of its workers in Myanmar have been killed in an attack by the country’s military.

The agency said more than 35 bodies, including women and children, had been found in the eastern state of Kaya since the attack.

They say the army forced people out of their vehicles, arrested some and killed others, burning their bodies.

The BBC reports that Myanmar’s military has denied the allegations.

Save the Children said the two workers killed were “both new fathers and worked on children’s education”. After doing public service, they were going home on vacation.

In a tweet, the charity called on the UN Security Council to take action to ensure accountability for those responsible.

Myanmar’s opposition has also blamed the army for last Friday’s massacre near Mo So village in Hapruso. Pictures taken after the attack show the remains of burnt cars.