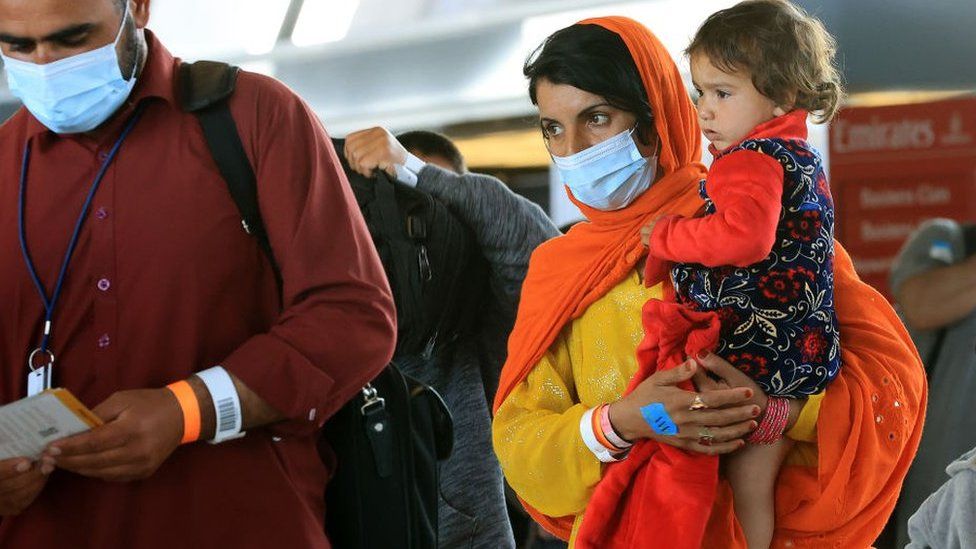 Masoud, his wife and four children were among them, clutching plastic bags filled with blankets, toothbrushes and the like. Someone had given the girls notebooks, the kind American children will be going back to school with this week.

He had been a driver for US forces and then the Afghan government, he told BBC Persian. “Everyone knew who I was working for,” Masoud said.

As soon as Kabul fell to Taliban hands on 15 August, he shut his house and went straight to the airport, though not with his car, today perhaps still abandoned in his driveway. “I could not stay longer” he said, realising he had a target on his back. “For years people had seen me with these [government-marked] cars”.

It was just as well Masoud fled quickly.

Those lucky enough to have escaped before the allied troop withdrawal deadline of 31 August can look forward to a new life in the US or one of two dozen countries that have opened their doors to Afghan refugees – even as hope dims for those trapped in Afghanistan when evacuations end.

Afghan refugees arrive at Dulles airport
IMAGE SOURCEGETTY IMAGES
image captionAn Afghan woman arrives at Dulles airport after fleeing the Taliban
When they landed at Dulles Airport, just outside Washington DC, men, women, children and the elderly were shepherded aboard a fleet of buses and taken to the centre that would give them temporary shelter.

Rows of neatly made beds with green covers made the cavernous place resemble the inside of a military barracks. A fleet of 20 or 30 portable toilets had been put in a back lot.

Some 300 people would spend the night there, BBC Persian was told before access to the centre was cut off to journalists.

A translator volunteering at the centre described seeing among the arrivals a young girl who had come with only a sister and cousins, but no parents. “Her mother had to choose between sending her daughter alone or keeping her in Afghanistan,” BBC Persian was told. Her relatives did not know when or if the girl’s mother would make it.

Another woman had just given birth five days earlier, but had kept quiet about her condition, bearing the pain all the way from Kabul to Virginia. The translator discovered that she was bleeding and called an ambulance, she said.

Latest updates
Kabul airport attack: What do we know?
Where will all the Afghan refugees go?
Over 110,000 people have been airlifted from Afghanistan since the start of the evacuations in July, with over a third flown out of Kabul in just 48 hours between Tuesday and Thursday in over 180 US military and coalition flights.

Tens of thousands are now awaiting background checks at bases in a network of transit centres – dubbed “lily pads” – across the Persian Gulf and Europe before being brought to the US or sent to a third country for relocation.

John Kirby, the Pentagon spokesman, has said that the US plans to start the resettlement of those who arrived in America by first placing some 25,000 refugees at four military bases.

From Fort Bliss, Texas; Fort McCoy, Wisconsin; Fort Lee, Virginia or Joint Base McGuire-Dix-Lakehurst, New Jersey, the refugees can move to more permanent shelter, arranged with the help of religious and private charities and community efforts.

Donations and desperation
Over the weekend, volunteers arrived at the Mustafa Mosque in Annandale, just down the road from Dulles, to help sort donations for distribution to refugees.

Many new faces and young people had come, happy to help, said Ruhina Baser Panah. “But at the same time, they are depressed for the reason they are here.”

Volunteers outside the Mustafa Mosque in Annandale in Virginia
IMAGE SOURCESAM FARZANEH FOR BBC
image captionVolunteers at the Mustafa Mosque in Annandale in Virginia
“We’re tapping into every resource we can think of” to prepare for a flood of new arrivals, Margaret Costantino, director of the Center for Refugee Services in San Antonio, Texas, told the BBC. Some 400 or more Afghan refugees are expected.

The charity has worked for years with former Afghan interpreters resettled in the US. Now, along with the flood of donations, there has been a flood of desperate people. The office went from relative quiet to having more than two dozen families lined up in one day to ask for help getting relatives out.

“We want the American people and the American government to help our nation,” pleaded one of the men who turned up.

Ms Constantino said that before the Taliban’s lightning advance a lot of family members had been content to stay in Afghanistan and didn’t think about the need to evacuate.

“All of that changed. When the Afghan government fell, we had a lot of local Afghans who still have other family members who are stuck in Afghanistan and can’t get out,” she said.

The centre has been identifying Afghans at risk and sending lists to the US defence department.

media caption“I helped the US, now my family is at risk” – Afghans in Texas plea for help
But time is running out for out for those left behind as the security situation in Afghanistan deteriorates.

President Joe Biden has said that the government would “find means by which we can find any American who wishes to get out of Afghanistan” after the troop withdrawal. But Thursday’s deadly bomb attack – and the threat of more to come – has further complicated evacuation efforts.

Canada and several European nations have ended their military airlifts. US charities that had organised chartered flights were reportedly told those efforts had to be suspended by Friday.

Peter Quinn, a retired US Special Operations officer, received a plea for help from an old friend, the commander of an elite special mission wing of the Afghan Air Forces called ‘777’. He was desperate for help getting the wives and children of his unit out of the country.

Within three days, Mr Quinn and a group of civilian associates launched ‘Operation On Wings of Eagles’ to evacuate them and others on private flights. They dubbed the 1,165 Afghan family members of the commandos in the unit their ‘Schindler’s List’, compiling names and passport numbers for authorities to let them through.

The team urged the Afghan commandos to send their families to Kabul airport immediately while an evacuation plan was drawn up. But the families waited until after the call for prayers the next morning, Mr Quinn told BBC.

“They waited too long,” he said. By then, the airfield had been cordoned off, and they could not get out.