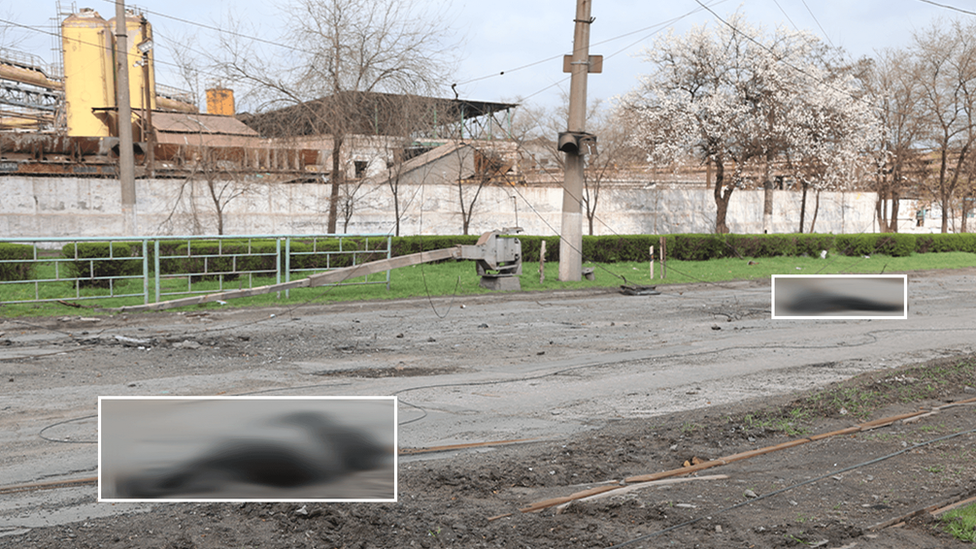 The graphic videos, posted on social media in recent days, come as the United Nations has confirmed that it is investigating hundreds of allegations of killing of civilians during the invasion of Ukraine.

The southern port city of Mariupol has been the scene of weeks of intense fighting between Russian and Ukrainian forces.

We’ve been examining these latest videos for clues about what might have happened.

In one video, we counted 18 bodies – all appear to be wearing civilian clothing and there are no weapons visible. One body is lying next to a bag of shopping at a bus stop, another next to a damaged car.

Looking at all four videos, we counted 23 bodies in total.

The videos also show damage to buildings, knocked down power cables and debris on the road. Civilians can also be seen walking past the bodies.

The BBC has matched buildings, road markings, bus stops and other visual clues seen in the videos, to satellite and street view images of the road.

For example, in one of the videos, a body is lying in front of a lamp post and a section of distinctive metal fencing, behind which is a white wall and part of the steel plant.

It matches the same location seen on Yandex street view.

News agency photographs of some of the bodies can also be matched to the scene.

One is filmed by Patrick Lancaster, a former US navy intelligence veteran who has been posting videos from Russian-controlled areas in eastern Ukraine on his social accounts since 2014.

Mr Lancaster has frequently appeared as a guest on Russian state TV, as well as US conspiracy website InfoWars.

Another video is filmed by Italian journalist Vittorio Nicola Rangeloni. Mr Rangeloni, who lives in the eastern Donbas region of Ukraine, began posting videos from Mariupol in late March.

The third and fourth videos were uploaded by Russian agency ANNA News and the pro-Kremlin Telegram channel, Signal.

It is not clear when the videos were filmed. However, we found that the earliest one online was the ANNA News report, which was uploaded on 15 April.

The earliest appearance of two of the remaining videos could be traced to 18 April and 19 April respectively.

According to the Institute for the Study of War (ISW), Ukrainian forces had been in control of the area where the videos were filmed until 28 March.

It says Russian forces claimed control of this area on 7 April but it also notes that the Russian Ministry of Defence claimed that hundreds of Ukrainian marines surrendered at the Ilyich metal plant on 13 April.

A satellite image from the US firm Maxar on 11 April does not appear to show any bodies on the street at that point.

And cloud cover in the area in images they provided for the period from 13 to 19 April means it’s not possible to see the street clearly.

Several passers-by interviewed in the videos said they were told the victims were killed by a Ukrainian sniper, targeting people passing along the road.

In the video filmed by Mr Rangeloni, one man says: “I’m in shock, I’m shocked. They say a sniper was sitting there, people were going to get their work documents and he was shooting them.”

Another man, asked by the journalist if there was a Ukrainian sniper, replies that the Ukrainians were in the “factory” at that time – referring to the steelworks alongside the road.

However, neither of them says they witnessed any of the killings. The BBC has not been able to verify their claims, but has contacted the Ukrainian and Russian authorities for comment.

The UN Human Rights Office in Ukraine told us that they cannot verify reports of killings by a Ukrainian sniper.

In the video taken by Mr Lancaster, a man who is interviewed takes the opportunity to launch into a lengthy denunciation of the Ukrainian government, and praises President Putin.

We used facial recognition analysis on the interviewees in the videos – using a computer algorithm to compare their images to a huge number of photos of people’s faces – to see whether they had featured in other videos during the conflict but could not find any matches.

We also approached Mr Rangeloni and Mr Lancaster for comment. Mr Lancaster said: “Neither myself or that man [I interviewed] said who killed those people as that area was a huge hotbed of fighting”.