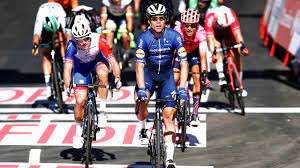 It’s been nearly a week since an online video emerged of an overheated Egan Bernal having an improvised post-stage cold shower at the Vuelta a España finish, courtesy of a Ineos Grenadiers soigneur and a team kitbag filled with freezing water.

Since then, videos or no videos, the searingly hot weather of the Vuelta that Bernal was trying to combat just hasn’t gone away.

Thursday’s sweltering temperatures of 40+ degrees Celsius in the finish in Cordoba marked the high point of the 2021 race so far. But there’s also been the mid 30s Celsius of the Velefique stage in the Almeria desert last Sunday, and the 36 Celsius in Villanueva de la Serena on Friday at the end of a 200-kilometre stage.

This latest heat blast is set to be followed by a seriously warm 32 degrees on Saturday, and that’s when we’re in the middle of the mountains again.

Florian Sénéchal: Vuelta a España win is a reward for hard work

On top of that, this year the Vuelta’s consistently high temperatures have set it apart from the exceptionally cold, rainy Giro d’Italia of this May and a Tour de France where temperatures plummeted to single figures at the Alpine stage finish in Tignes. As the tourist slogan puts it, España es diferente, even when it comes to the weather in Grand Tours, it seems.

“It feels like it just never gets any cooler,” Miguel Ángel López (Movistar) commented on Thursday, while Bernal echoed his compatriot’s words about the weather, “every day is just as extreme as the previous one.”

Handling extremely hot weather is hardly a new challenge in cycling, though. And the teams, then as now, say that the keys to getting through it all remains essentially the same.

“When you’re fighting against the sun, there are only two possible weapons,” Julen Ucin, team doctor at the Vuelta for Euskatel-Euskadi tells Cyclingnews, “hydration and keeping the riders as cool as possible. Above all hydration. There’s no way round that. You only have to be as little as three or five per cent dehydrated for your physical performance to be affected.”

With that in mind, other media report, during the Vuelta’s bakingly hot week, the teams have been using around an average of 300 bidons a day with a mixture of water and electrolyte drinks: more than 35 bidons per rider in other words. And in stages as blisteringly hot as the Vuelta, Astana head of performance Dmitri Fofonov tells Cyclingnews, a single team can get through 75 to 100 kilos of ice a day, “particularly with the ice-socks we use for riders now.

“It’s not surprising that it’s really hot round here, we’re in the Vuelta in August,” Fofonov said, “but that doesn’t make it any easier for the riders, particularly when it’s been as fast and furious in the bulk of the stages as well.

“Apart from the cars, we place as many team staff as we can throughout the stage on the roadsides to make sure they get as many bottles as possible. We’ve got pretty organised with all of that.”

It should be said that Fofonov was speaking before the relatively dull, and slow-paced, stage 13. But in either case the atmosphere behind the bunch in the race convoy of directors’ vehicles sometimes gets a shade frantic as rider after rider demands yet another bottle, he says.

“It gets a bit manic at times out there with the directors giving out bidons on the hottest stages here,” Fofonov says. “But not all the time, just at certain points when there’s a bit of a bagarre. But I think we’ve got a lot more means to keep the riders cool and hydrated when I was a rider.”

Asked if he was able to handle the heat himself, he said, “yes, because the temperatures here in Madrid are pretty similar to what we get back in Almaty in Kazakhstan for both the heat and the cold. And it was really hot too in Spain when I did the Vuelta in 2006, I remember, too.”

The fight against the heat is one that doesn’t just start and stop at the end of each stage, Ucin tells Cyclingnews. “The first thing we have to do is ensure there is no big increase in temperature and the second is hydration, so we check for both of those before with each rider. Starting out each stage hydrated is fundamental. And then we try to minimize their exposure to the sun before the stage itself.

“We do the same during the stage, obviously with the drinks and electrolyte drinks and then making sure the containers we keep the drinks in are as cold as possible, to keep down their temperatures.”

“Afterwards, we check their temperatures and hydration levels again, and keep them out of the sun as much as possible.”

The consequences of not doing so are clear: sunstroke and a considerable drop in performance, and a huge rise in body temperatures. “In the most extreme circumstances, it’s a condition that needs hospital treatment.”

The other technique, more long-term, of pre-race adaptation to heat is one that a team like Euskatel-Euskadi take very seriously. “There are lots of strategies for that, like getting in a sauna. Or it’s more effective to go to a place where the weather is a lot hotter than what you’re used to, then train a little bit more gently a standard race pace for about a week and that’ll help you as well. That’s what we did and I think it’s worked.”

Fortunately, after Thursday’s extremely tough day the temperatures are tending to be cooling each day, even if they remain very high. And according to Ucin, bodies adapt better going from heat to cold than in the opposite direction. “Normally it shouldn’t be a problem,” he said.

James Knox (Deceuninck-Quick Step) spoke of the heat after stage 13, saying, “Today was way easier. It was slightly cooler and a lot easy intensity so it was definitely a lot easier to manage an effort.

“Yesterday [Thursday] we had out-and-out fighting and pretty extreme heat in the final so it was pretty tough.”

He says the weather is no better but no worse than some other stages where the thermometer doesn’t seem to stop rising ever. “I’ve done UAE and I’ve done Australia, so I would say it was very similar to those stinking hot days.”

Knox dismissed the idea that riders forget to drink on such ultra-hot stages even when the racing is full-on: “You’re just thirsty,” he says. “You don’t need to think about it when you’re always needing a drink.

However, he agrees with Ucin that there’s no reason for heat to take a toll long-term. “As long as you’re drinking plenty on and off the bike, then I think you get more used to it. You get used to it too, with time, compared to the first days of the race.”

In terms of the weather, there are those who seem to get through better than others, like Diego Rubio (Burgos-BH), part of the three-rider breakaway that endured in the heat from kilometre one all the way through to kilometre 174 on stage 13.

“It’s really hot, but I prefer this to the cold,” Rubio told Cyclingnews after the stage. “But this is what it’s all about, being in the south and in Spain. You just have to remember to keep on hydrating or you risk paying for it the next day, and really badly too.”

As for getting into the mountains and with the heat to face as well on Saturday Rubio said there was only one strategy possible: “try to survive.”