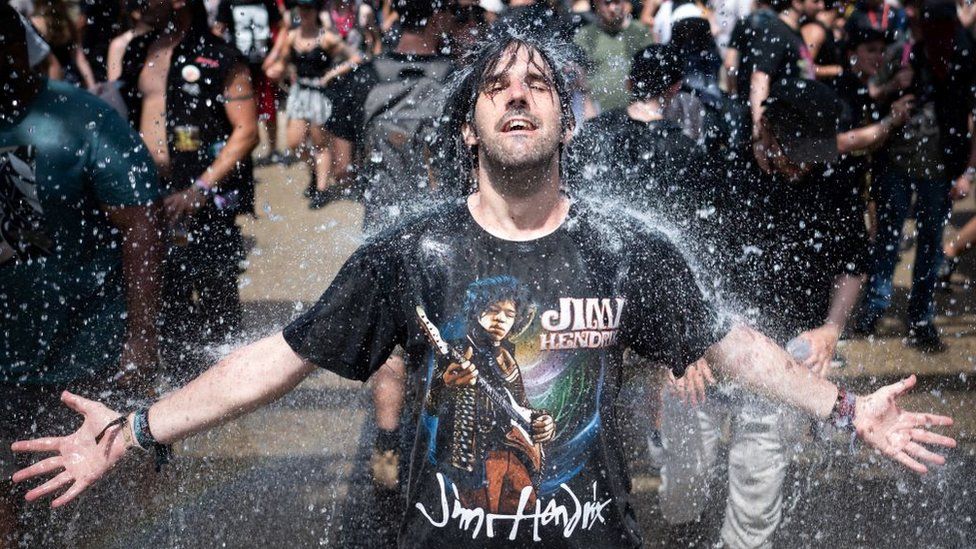 Concerts and large public gatherings have been called off in the Gironde department around Bordeaux.

On Thursday, parts of France hit 40C earlier in the year than ever before, with temperatures expected to peak on Saturday.

Scientists say periods of intense heat are becoming more frequent and longer lasting as a result of global warming.

In Gironde, officials said public events, including some of the official 18 June Resistance celebrations, will be prohibited from Friday at 14:00 (12:00 GMT) “until the end of the heat wave”. Indoor events at venues without air-conditioning are also banned.

Private celebrations, such as weddings, will still be allowed.

The French interior ministry warned people to be extremely careful and not expose themselves to the weather.

State forecaster Meteo France said it was the earliest hot spell ever to hit the country, which has been caused by a mass of hot air moving from north Africa.

Temperatures could hit 39C in Paris and droughts have also raised the risk of wildfires, the forecaster said.

“I’m 86 years old, I was born here, but I think this is the worst heatwave I’ve ever seen,” Jacqueline Bonnaud told the AFP news agency in the southern city of Toulouse.

The increased use of air-conditioners and fans was forcing France to import electricity from neighbouring countries, grid operator RTE said.

In Spain, which has just experienced its hottest May since the beginning of the century, temperatures are forecast to hit highs of 43C this weekend, the Aemet weather service said.

There have been forest fires in Catalonia, including one which could grow to 20,000 hectares before it’s contained, the regional government said.

Water is so low in large stretches of Italy’s largest river, the Po, that locals can walk through the middle of the expanse of sand and wartime shipwrecks are resurfacing.

In the UK, temperatures are expected to reach 33C in southern England, while a level three heat-health alert has been issued for London.

On Wednesday a third of the entire population of the United States were advised to stay indoors due to record temperatures. In India, Delhi has recorded a maximum temperature of at least 42C on 25 days this summer, the India Meteorological Department reported.

Climate change is causing global temperatures to rise. Greenhouse gases, like carbon dioxide, released into Earth’s atmosphere in large volumes are trapping the sun’s heat, causing the planet to warm.

This has brought more extreme weather, including record-breaking high temperatures across the world.