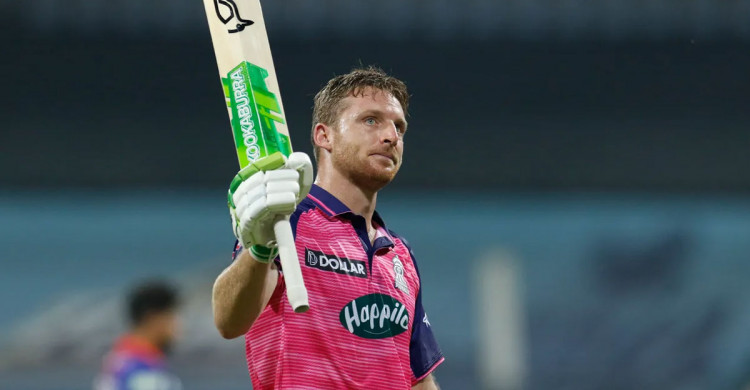 The last over of Rajasthan’s innings against Gujarat is underway. Hardik Pandya’s 6 runs surpassed Josh Butler as the highest run scorer in the innings. Until then, Butler, who still owns the Orange Cap, then finds the camera, and the Orange Cap, which marks the highest run, has disappeared from Butler’s head. Butler may have thrown himself into the challenge, but once he got it, he would give up. He didn’t just have the orange cap on his head in that over. The one who has ‘achieved’ with the bat after that has not come down from his head till now.

Do you know the number of Butler’s centuries on this day a year ago? Zero. The English star has scored five centuries in the last one year. All four of the last eight innings in the IPL have turned into centuries. Another century came against Sri Lanka in the World Cup. And this time in the IPL, Butler has just started madness! While no one else has reached the quota of 300 runs, he has scored 491 runs in seven matches. Interestingly, Hardik Pandya’s 295 runs is the second highest so far, while Butler’s 358 runs came from boundaries alone.

In this IPL, Josh Butler has become a machine, a run machine. He has taken the responsibility of explaining what it means to play the game of snatching. What you are batting will really make the opponent’s chest tremble. But that ‘terrible’ butler is again very calculating and smart!

In the first few overs, when the pacers are swinging in the current IPL and threatening the batsmen, Butler has no objection to crossing the gap. He was dismissed for 11 off 13 balls in the match against Lucknow. In the match against Gujarat, only Rajasthan hit the target. In that match, Butler hit a target of 193 from the first over and played a devastating innings of 54 off 24 balls.

Butler made just four runs off a boundary in the first 11 balls of the match against Hyderabad. Before being out, he brought 31 runs from the next 16 balls. At one point in the match against Mumbai, Butler had scored 12 runs off 15 balls and then brought 6 runs off 52 balls. He also made a slow start in an innings of 60 off 48 balls with Bangalore, scoring 10 off the first 14 balls.

His two centuries against Kolkata and Delhi have shown how devastating he can be if he settles down at the crease. Butler, who was 3 for 9 at one point in the Kolkata match, stopped with 100 off the next 51 balls for 103 off 61 balls. And before being out with Delhi, he brought 105 runs in the last 50 balls. However, he made only 11 runs in the previous 14 balls.

After a slow start, Butler jumped on any over target. For example, Mumbai’s Basil Thampi came out of the shell with 26 runs in three sixes and two fours. Umran Malik was 18 off 12 balls with five sixes in the fourth over. In the Delhi match, in the sixth over, Khalil brought 15 runs from the over and changed the gear.

Butler is also careful to take chances in front of certain bowlers. For example, in the century match against Kolkata, Sunil Narine brought only 5 singles from 9 balls. Jaspreet Bumrah scored 11 off 15 balls in the century-scoring innings against Mumbai. Hershel Patel made 6 off 9 balls in the match against Bangalore. Butler does not agree to cut such bowlers without taking any risk.

But in this way, playing according to the plan, Butler is moving forward on the path of all incredible records. Virat Kohli holds the record of four centuries in an IPL. In that edition of 2016, Kohli scored 963 runs and set the record for most runs in an edition. Chris Gayle’s highest six centuries in IPL history. Both records are now under threat for Butler’s run, which runs like a mad horse. Who will stop Butler, who has scored fifty runs in five of the seven matches?

But is this the first time someone is going to get a thousand runs in one of the IPL? As he started batting, he had the courage to think whether the orange cap would come off his head or not!