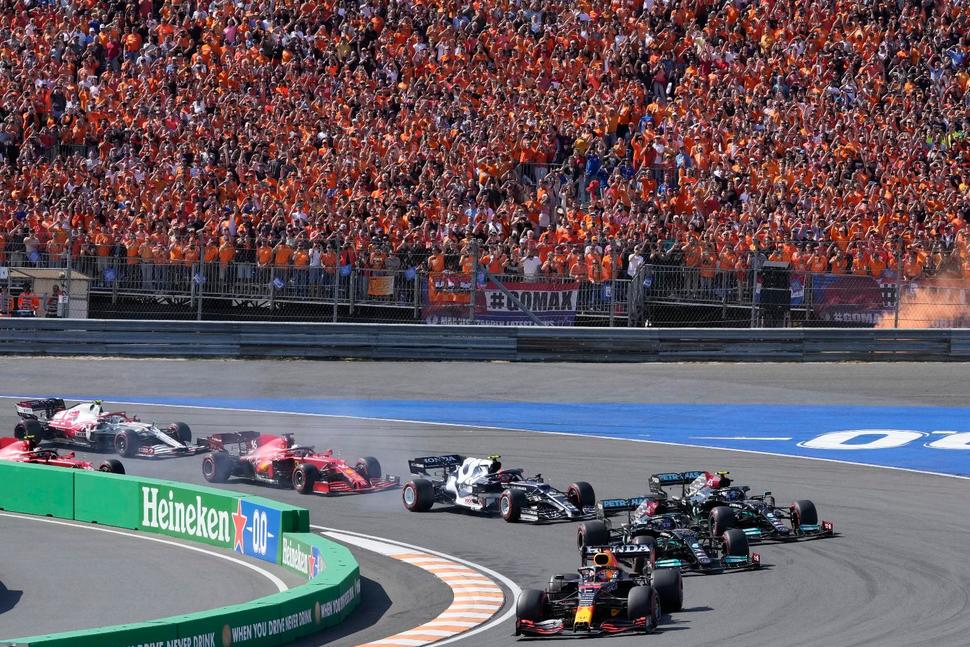 Max Verstappen thrilled his home crowd by winning the Netherlands Grand Prix in style to reclaim the Formula One championship lead from Lewis Hamilton. Red Bull driver Max Verstappen of the Netherlands leads at the start and followed by Mercedes driver Lewis Hamilton of Britain and Mercedes driver Valtteri Bottas of Finland during the Formula One Dutch Grand Prix, at the Zandvoort racetrack, Netherlands, Sunday, Sept. 5, 2021. (AP Photo/Peter Dejong) THE ASSOCIATED PRESS

F1 preview: A lap of the Belgian Grand PrixNOW PLAYING
Lewis Hamilton feels like race officials are targeting him
Lewis Hamilton denies rumours of a move to Ferrari
Lewis Hamilton clinches his sixth world championship
Lewis Hamilton eases to eighth Hungarian Grand Prix victory
The Red Bull driver’s leading seventh win of the season and 17th of his career moved him three points ahead of the defending champion, who finished second but softened the blow with a bonus point for fastest lap.

A jubilant Verstappen grabbed a Dutch flag and lifted it high toward his adoring fans as they celebrated together.

Verstappen started from pole position for a season-leading seventh time, and sixth in the past seven races, courtesy of a brilliant qualifying session.

Hamilton and Bottas were just behind. Verstappen made a great start to pull clear away from them on the speedy 4.3-kilometer (2.7-mile) Zandvoort with its high-banking corners.