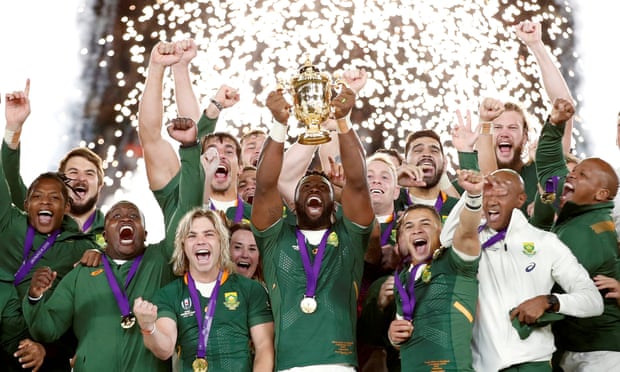 The Rugby Football Union has confirmed its intention to bid to host the 2031 World Cup as part of a long-term vision also designed to ensure England are consistently in the top two in the rankings, as outlined by the new chair, Tom Ilube.

World Rugby’s council is due to vote on the host nations for the 2027 and 2031 tournaments next May with candidates due to formally submit bids by January. Australia are favourites to be awarded the 2027 World Cup while the USA is also interested in bidding for either edition.

Texas and Oklahoma fans fill the Cotton Bowl in Dallas.
US Rugby World Cup bid for 2027, 29 and 31 includes NFL and college stadiums
Read more
As revealed by the Guardian, the RFU previously held discussions with the other home unions over a joint bid but it is believed that stalled due to a failure to reach a consensus over where the final would be staged. The RFU has since struck out on its own and while World Rugby would require a significant financial guarantee – France’s was £150m to secure the 2023 tournament – Ilube has revealed the extent of the union’s interest with further talks with the government and other partners required to progress the bid.

“We would like to bid for that – the 2031 World Cup,” he said. “That would be really exciting to have it here and you could imagine what it would be like and I think that really gives us a focus as well. So we will see what happens, it will be interesting. It is something that we are really interested in discussing and engaging with the process.”

Ilube was appointed in March and began the role in August, becoming the first black chair of a national sporting organisation. Hosting the 2031 World Cup would be the culmination of a plan which would see England address what he sees as an inability to consistently produce world-class players, as well as “do a whole lot more” to improve diversity within the sport.

“I am not certain that our system at the moment continuously generates those absolutely world-class players and I think that if we are going to be at our rightful place, England should consistently be ranked one and two in the world,” he said. “Year after year after year we should be there and to do that we need that cohort of absolutely world-class players and something about the system needs to generate them.

In April the RFU set up a diversity and inclusion board, having already conducted a review into supporters singing Swing Low, Sweet Chariot at England matches. In May the word “Saxons” was removed from the A team’s name in a further effort to modernise but while Eddie Jones’s squad has a strong representation of players from BAME backgrounds, the union has struggled to shake its reputation as an organisation overseeing a predominantly white, middle-class, public-school sport.

“There’s this perception in some people’s minds and that doesn’t quite marry up with the reality so there is something about the communication that we need to look at over time,” said Ilube, who has held conversations with a number of black players since his appointment.