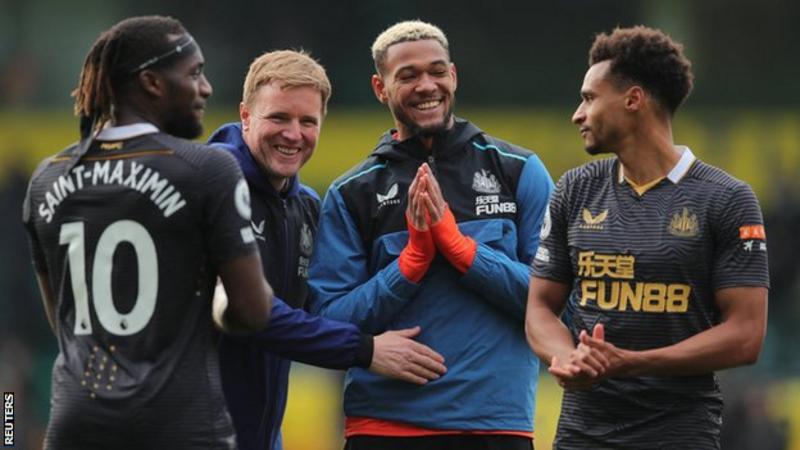 Newcastle United’s rise from the Premier League relegation zone to the top half has been “an incredible turnaround”, says Magpies legend Alan Shearer.

Joelinton’s brace and Bruno Guimaraes’s strike in a 3-0 win at Norwich on Saturday moved Newcastle up to ninth.

The club were 19th when Eddie Howe took over as manager in November, five points from safety.

“Hopefully, this is a glimpse of the future,” Howe said.

In 2022, only Liverpool have won more points than the 32 picked up by Newcastle, who spent 150 days in the relegation zone and are now just nine points off the European places.

The club have been revived under Howe, who replaced the sacked Steve Bruce following a £305m Saudi Arabia-backed takeover.

And they look certain to become the first team to stay up after failing to win any of their first 14 games – winning for the first time against Burnley on 4 December.

“Eddie Howe deserves great credit,” Shearer told BBC Radio 5 Live. “He made changes again to the team that got a good result in the week [against Crystal Palace] so the players that came in responded.

“The signings, the confidence, the belief that Eddie has given Newcastle has been outstanding when you consider they were five points adrift in 19th when he took over. It’s been an incredible turnaround.”

‘Everyone can see a great future for Newcastle’

Brazil midfielder Guimaraes has been a big hit since his £35m move from Lyon in January and he is already Newcastle’s joint third top scorer this season with four goals.

Ex-Brighton defender Dan Burn and Aston Villa loanee Matt Targett have added some solidity at the back and England right-back Kieran Trippier showed some moments of quality after moving from Atletico Madrid before his injury.

Joelinton’s move to midfield, having previously been a striker who barely scored, has been a huge factor in Howe’s success too – although he played up front against Norwich.

“We were very good after we scored,” Howe said.

“We were very keen to extend the good run we are on and not fall into any lull or falling of standards. That is the most pleasing thing of the day, that we have come here and been very professional.

“We gave it our all to win a match. Some of the quality of our play, especially after we scored, was the highest level and we scored some good goals.

“We have been playing under the pressure of trying to stay in the league and we have got a lot of results playing resilient, organised football. Today, for the first time the shackles came off a bit. The confidence on the ball was high and hopefully this is a glimpse of the future.”

At the end of the game Howe and his players went over to their jubilant fans and threw shirts into the crowd.

“There is a very good feeling in the group,” Howe added. “There is a good relationship between staff, players and supporters. If you have unity and quality footballers it is a good mix. We are enjoying our time together and the challenges as they come.”

Allan Saint-Maximin, Newcastle’s star player before the takeover, said: “Everyone can see now a great future for Newcastle.

“I’m sure we’ll start to be one of the best teams in the Premier League. For that to happen we need to work hard in every training. I know the owner and the manager will do everything to improve the team.

“Everyone can score any time. That’s why we can be one of the big teams in the Premier League.

“It’s really exciting. I think every player can really want to be part of this team. We have great supporters, a great city, one of the best leagues in the world. I think the future for Newcastle will be really good. We’re the most rich club in the Premier League and I’m sure so many good things will start to happen.”

Norwich boss Dean Smith, who took his job around the same time as Howe, rued the difference in finances between the clubs.

“They were a team that have spent £100m in the window and we’ve promoted an U23 player, that is the levels,” he said.

“You just look at the January window they have had. They have improved. Eddie is an unbelievable coach. But they are owned pretty much by a country, so they are always going to improve.”