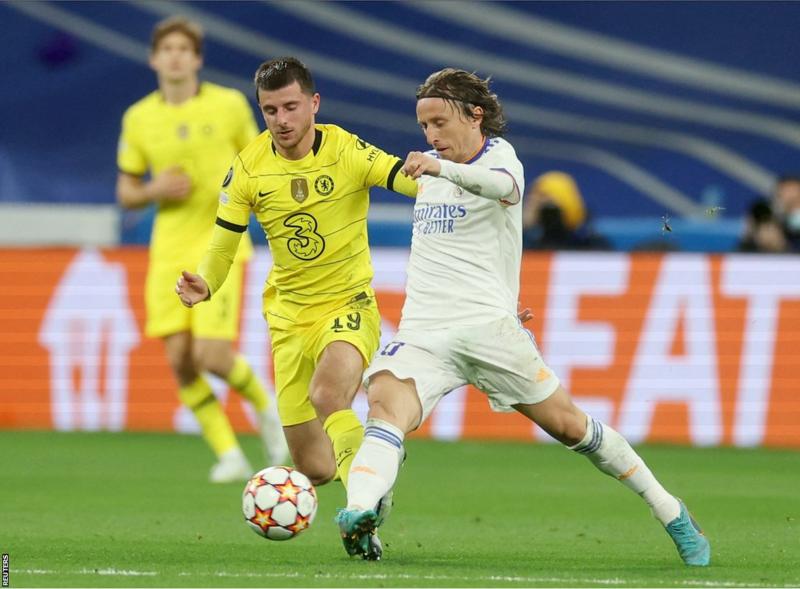 It’s not difficult to pinpoint the biggest threat to Manchester City’s chances of advancing to the Champions League final.

Karim Benzema is having a spectacular season for Real Madrid, with consecutive hat-tricks against Paris St-Germain and Chelsea suggesting the 34-year-old France striker is ready to inherit the ‘Mr Champions League’ mantle from former team-mate Cristiano Ronaldo.

But Benzema is not Real’s only 30-something star who keeps getting better with age, because midfield maestro Luka Modric – now 36 – is also having another magnificent campaign.

That moment of magic was dubbed the “pass of the decade” by former Rangers striker Ally McCoist, while fellow pundit Rio Ferdinand declared it should be “illegal”. Spanish sports newspaper Marca wrote: “With Modric on the pitch, nothing is impossible. Build him a statue now!”

Real president Florentino Perez is another to have sung his praises, saying Modric should be considered for another Ballon d’Or after shining against Athletic Bilbao in January’s Spanish Super Cup final.

The ‘Benjamin Button’ of European football

Part of what lies behind the long list of tributes to Modric is a sense that it simply shouldn’t be possible for him to consistently perform so brilliantly at the age of 36.

That sense of incredulity at his physical condition came up again when he was filmed celebrating in the dressing room after last month’s comeback victory over PSG, still apparently full of energy despite covering more ground (10.54km) than any other Real player.

The midfielder’s age is even a joking matter within the squad: Modric is only a year younger than winger Rodrygo’s father, a former professional player in his native Brazil, and the pair have jokingly adopted the respective nicknames ‘son’ and ‘dad’ for each other, with Rodrygo even wishing his team-mate a happy Father’s Day on social media last month.

At the end of last season, sports paper AS described Modric as “Benjamin Button” – in reference to the Brad Pitt movie about a man who ages in reverse – after noting with disbelief that he had made 57 appearances for Real and Croatia over the course of the campaign, completing the full 90 minutes in 33 of them.

And he hasn’t slowed down since then, playing 44 games so far this season to make the idea that he could keep on playing into his 40s – as suggested in a recent interview with AS by Vlatko Vucetic, a Croatian fitness specialist who works closely with Modric – appear not quite so ridiculous.

However much longer he keeps on going, though, Modric’s position in Real Madrid’s history books is already assured.

After joining from Tottenham in 2012, his first season was relatively disappointing as Jose Mourinho’s reign imploded.

But Carlo Ancelotti’s (first) arrival at Real in 2013 saw Modric immediately become a key player, and he concluded that campaign by contributing to one of the most famous moments in club history: delivering a pinpoint corner for Sergio Ramos’ injury-time equaliser to pave the way for a 4-1 Champions League final victory over Atletico Madrid, the club’s 10th in the competition.

Ever since then, Modric has been an indispensable member of the Blancos’ midfield, winning three more Champions Leagues and taking the Ballon d’Or after the most recent of those triumphs in 2018, the same year he inspired Croatia’s run to the World Cup final.

It has certainly helped that the majority of his time in Spain has been spent as one-third of an exceptional trio alongside Toni Kroos and Casemiro, who have made a staggering combined total of 1,114 appearances in the famous white shirt (Modric 429, Kroos 357, Casemiro 328) to undoubtedly become one of the best central units of all time.

They have been so successful together because they complement each other perfectly: Casemiro’s powerful defensive instincts, Kroos’ metronomic passing and Modric’s energy and guile provide everything a midfield could need.

Modric, however, is the one who has produced the regular magical moments of creative brilliance to really stand out, and he now probably has only Zinedine Zidane – whose playing career at the Bernabeu was much shorter – as a serious rival for the status as the club’s best-ever midfielder.

And the past few months have made it clear that he is nowhere near finished yet. To flip the old axiom about emerging teen talents, if you’re good enough, you’re young enough. And Modric, who made his professional debut when City’s Phil Foden was three years old, is still one of the very best.