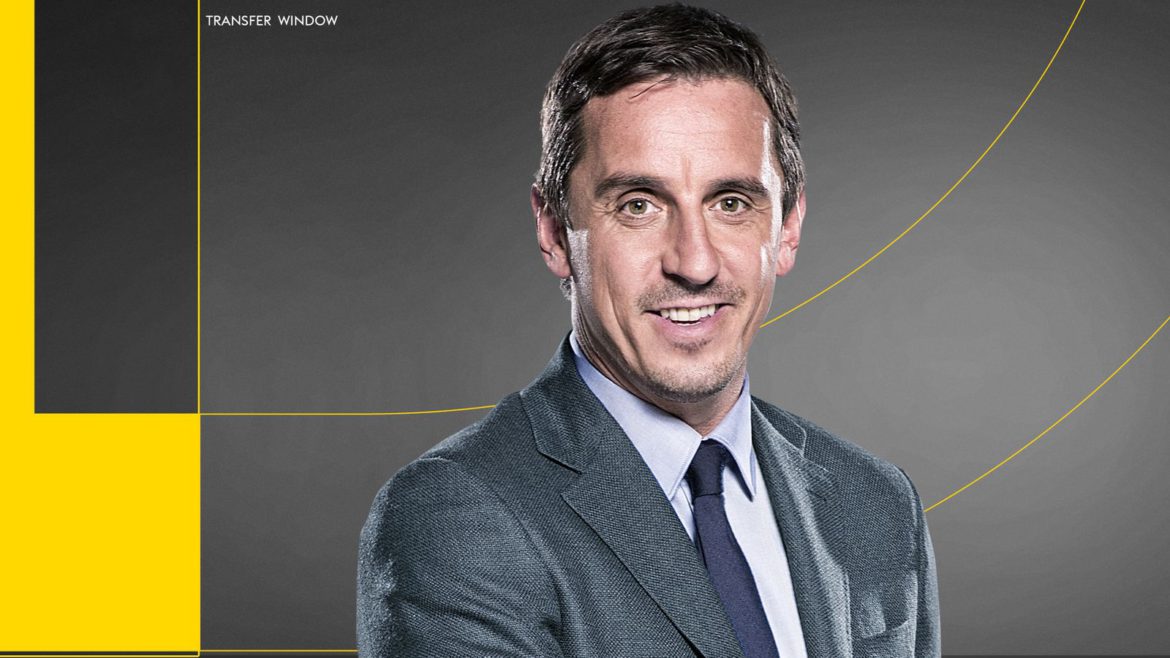 Sky Sports pundit Gary Neville has his say on some of the big stories of the summer transfer window, from Cristiano Ronaldo’s return to Manchester United and Saul Niguez joining Chelsea, to Kylian Mbappe and Harry Kane staying with their clubs.

I don’t think United will have to adapt too much to his arrival. They have fantastic forward players, good creative players too, with Jadon Sancho wide, Marcus Rashford, Anthony Martial, Mason Greenwood, they should create plenty of chances for him.

I love Edinson Cavani, so it’s a question of whether they can play either-or, or could they play both? Everyone, including me, is expecting him to play as a number nine but could he play just to the left of Cavani, with Greenwood or Sancho to the right? That would be a guarantee of goals.

The performances so far, they’ve really struggled in their two away games, but they have a number of players who can go and win a match in a moment. His willingness and want to score goals is better than anyone. The big question is whether it’s enough to win the title. I don’t quite feel it is, the Premier League is the strongest it’s been since the mid-2000s.

I think for Manchester United it’s an incredible addition to their squad, United did need a centre forward, but in terms of his physical aspect, he’s almost 28, 29, 30 when you look at him. People will look at a young Cristiano and think how he used to beat five or six players in wide areas, he’s now more efficient.

If Cristiano Ronaldo of now was there eight years ago, he’d still be labelled a world-class player. His movement in the box, ability to score goals, composure in front of goal and taking chances still makes him world-class – and far from over the hill.
James’ move to Leeds good for all involved – Lingard should have moved, too

Play Video – James: Leeds move the right one for my career
Having almost joined Leeds in January 2019, Daniel James has now been signed by the Yorkshire club – and says he can’t wait to run out in front of the Elland Road faithful.
It’s really good for Dan James. It’s one of those where this is a win-win. He came to United and always did his very best, he was a massive threat on the counter-attack, but United have a lot of players in those areas.

It’s really important for young players to go and play, and Leeds have always wanted him. They wanted him the first time round when United got him instead. He’ll suit the way they play with such pace on the counter-attack. He’ll love it there, the crowd’s a big crowd, a club that demands a lot.

Leeds sign James from Man Utd for £25m
It’s a good thing for United to get the money they did, and good for Dan to further his career at a good club.

I’m disappointed Jesse Lingard hasn’t left. He’ll get a few games but I think he had something going at West Ham that meant he was standing up as a really good player and to go back into being a squad player again, it’s disappointing. Sometimes you need to fly the nest and go.

They are a strong team. I’ve watched them twice already this season, away at Arsenal and away at Anfield. That is a really good team, a team that wins and is ready to win more. When they went down to 10 men at Anfield, I never really thought it was going to be easy for Liverpool to break Chelsea down in the second half. That’s when you know you are playing against a good team because that’s the toughest place to play.

Chelsea sign Saul on season-long loan from Atletico
And the addition of Saul along with Romelu Lukaku makes them stronger and stronger and stronger. In the midfield with Jorginho, N’Golo Kante and Mateo Kovacic they already look really strong. You only need two in there with the way they play but Saul’s addition means they can challenge on all fronts. It strengthens them enormously and makes them more formidable than they were at Anfield last Saturday.

You could argue that Chelsea may be a bit light at the back, but what they do have is a system of playing with those two players sat in front of that back three that makes them solid. So what Thomas Tuchel has done since he’s come in is maybe recognise that they can’t be a back four.

If you were looking at them as a pair of centre-backs you wouldn’t be sure about them winning the league, but with the three they have at the back, and sometimes it becomes a five with the two protecting in front, Chelsea are more than comfortable.

They’ve got a system of playing that protects the individuals from potentially being isolated and that now, with the confidence and the belief they have when you win a Champions League like they did last season and with the business they have done in the transfer window, they are going to be very difficult to stop.

Kane will be disappointed but people will move on
Harry Kane

Tottenham striker Harry Kane has said he does not think his reputation has been tarnished following his transfer saga this summer.
At the end of the day, he’s tried to leave the club. I can see why he tried to leave, if Man City are offering you a position in their team under Pep Guardiola, it would’ve been a life-changing experience for him.

Spurs have had a great start to the season but the reality is, they’re not going to win the Premier League. Man City have a great chance, and had Kane gone there, it would’ve been a near-on banker.

Kane: My ‘conscience is clear’ despite Spurs exit plans
He’ll be disappointed, but he’s sensible enough to know he’s given a lot to Tottenham over the years and it’ll be forgotten the moment he comes back from England duty and gets back to scoring goals.

I played with players at United who at times had aspirations to leave, but once they settled down and it was established they weren’t leaving, people forgot about it.

Cristiano Ronaldo wanted to leave to go to Real Madrid, and had to stay another 12 months. There’s many incidences like this in football. Look at Mbappe at this moment in time.

Never mind new signings, Arsenal need senior players to stand up
Mikel Arteta embraces Martin Odegaard as he comes off the pitch (AP)
Image:
Mikel Arteta has brought in plenty of new players – but needs his senior figures to show leadership, says Neville
Mikel Arteta’s got to get those players fit, together and in the dressing room. He’s had issues on Covid, but there’s pressure building at Arsenal because their performances have been poor, they’ve wilted and been flaky.

There are ways to lose matches and Arsenal have done it in the worst possible way, where it looks like they’ve been rolled over. They have to get back after internationals to building some momentum. There are no signings I look at and think, ‘they excite me’, but they do have a group that need to come together quickly and form a team.

Arsenal sign Tomiyasu for £19.8m; Bellerin loaned to Betis
Sometimes it’s not the signings they bring in at Arsenal, it’s the senior players you look at and think, ‘what are they getting from them?’ Pierre-Emerick Aubameyang, Alexandre Lacazette, Granit Xhaka… they’ve got to get themselves right to create an atmosphere in that dressing room where they’re all together and aligned behind the manager.

They have to start working for each other on the pitch and be difficult to beat before they worry about winning loads of matches. They’ve been very easy to beat so far this season, which is not a good trait.

I’m not sure what Arsenal’s transfer strategy is. It seems a bit over the place. Maybe there is one, but it’s not clear. Sometimes you can see a left-field signing and think you can see where it comes from, but there’s quite a few of them at Arsenal.

I’m not sure what Arsenal’s transfer strategy is. It seems a bit over the place. Maybe there is one, but it’s not clear.
Gary Neville on Arsenal
I’m not sure what style of play they’re going for, but it’ll all come out in the next few weeks. Man Utd came out of a period under Sir Alex Ferguson, and it’s very difficult. Arsenal are suffering in that way too, the hangover of the Arsene Wenger era.

You’re trying to get the club to move forward, I always think of David Moyes’ comment that you’re going into the house, and the father’s left and you’re the step-father. I think that’s starting to leave Manchester United nearly 10 years on, but there’s probably still an element of that at Arsenal.

It’s not necessarily within the squad, sometimes it’s the non-football side that holds everything back, that feeling of not being happy in the club. There’s something not right at Arsenal, I think there’s a lack of surety at the top, you’ve got to stabilise first after the period they’ve had with Arsene Wenger.

PSG trying to create history with Mbappe, Neymar, Messi
Kylian Mbappe
Play Video – PSG reject £189m Mbappe bid from Real
The Transfer Show’s Kaveh Solhekol reports that Real Madrid have given up in their attempts to sign Kylian Mbappe in this transfer window, with the forward set to join for free next summer.
It’s a strange one. If you can leave on a free next summer, most of that £197m will be going to Mbappe! He’ll have clubs offering huge amounts of money [which will go] into his pocket.

PSG don’t surprise me, what they’re trying to achieve this season is to create a history, a legacy at that club and keeping Messi, Mbappe and Neymar together is at the forefront of that.

Mbappe stays at PSG despite Real being ready to pay £197m
Perhaps they’re thinking when he plays with them they can work on him to sign a new contract and the Real Madrid interest will pass or something will happen.

I’m not sure where Real Madrid are getting their money from, but it’s an incredible one. In any other club in the world, they would accept that deal with a year to go – but Qatar don’t have to accept that.