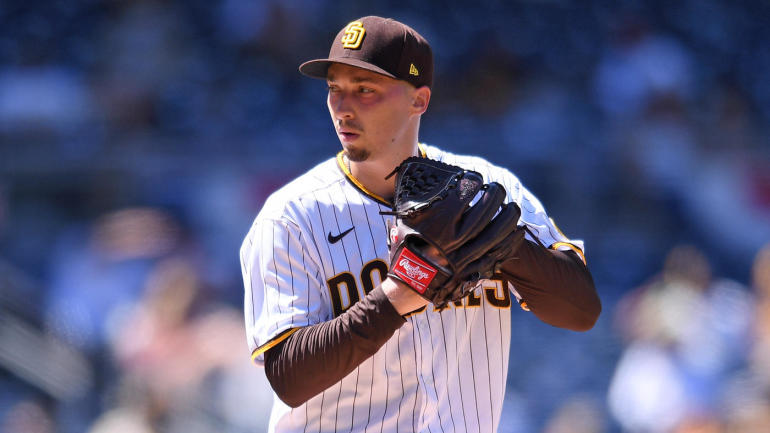 On Fantasy Baseball Today, we recap everything you need to know from Wednesday’s action

If you held on to Blake Snell, give yourself a pat on the back. He’s changed up his pitch mix, and over his past five starts he looks like Snell. You can read more about him below. On the surface, it seems like the opposite could be said for Zack Wheeler. Including Wednesday night, Wheeler has a 4.49 ERA over his past nine starts. I’m just not really buying the struggles over his last two outings. In both, it seems like Joe Girardi just left him out there too long. If Wheeler was just taken out after eight innings last night, he would have ended his night with 10 strikeouts over eight innings of four-run ball (only two were earned). Not bad.

On the complete opposite end of the spectrum, Zach Plesac has nothing in the tank. His velo was down across the board in this start against the Rangers and he can’t command any of his pitches. For some reason, he’s still rostered in 88% of CBS leagues. I know he’s in line for two starts next week, but I absolutely cannot start him, not even in a points league. In fact, I would have no problem dropping Plesac for any of the hot pitchers like Nestor Cortes or Daniel Lynch.

Of course, as always, you can follow to make sure you get the latest episodes of Fantasy Baseball Today right when they drop on Apple and Spotify.

Snell nearly makes it eight full innings!
Earlier this season we wondered if Padres SP Blake Snell would ever get back to the Cy Young level pitcher we saw in Tampa. More importantly, we even questioned if we would ever see the day where Snell went more than five or six innings deep. On Wednesday, we got both. Against a tough Dodgers lineup, Snell went 7 2/3 innings and allowed just three hits and one earned run. He didn’t walk a batter, and the most impressive aspect of Snell’s outing was his swing-and-miss stuff. Snell struck out 10 and induced a whopping 21 swinging strikes on just 122 pitches (11 coming via the slider).

So what’s different? Snell is throwing more fastballs, more sliders, fewer curves and he has completely ditched the changeup. Now his pitch mix looks like this: 61% fastball, 29% slider, 9% curve. Before, it looked like this: 50% fastball, 21% slider, 15% curve, 15% changeup. Snell has matchups with the Astros and Diamondbacks next week.

One thing Scott has noticed is just how simplified Snell has gone — he’s stressing his good pitches and eliminating those that aren’t working. Scott is cautiously optimistic moving forward.

Fantasy Baseball Today Newsletter
You’re destined to gain an edge over your friends with advice from the award-winning FBT crew.

I agree that CBS Sports can send me the “Fantasy Baseball Today Newsletter”.

We had a very fun pitching matchup go down Wednesday night between two young prospects with a lot of talent. Nationals SP Josiah Gray vs. Marlins SP Edward Cabrera. To set the stage, here’s what MLB Network’s Jon Heyman Tweeted about Cabrera prior to Wednesday’s debut: “Marlins phenom Edward Cabrera makes his debut tonight vs. the Nats. He’s said to have similar overall talent to Sixto Sanchez. Says one scout: “The only other changeup I’ve ever seen this good is King Felix.”

The matchup did not exactly disappoint. Cabrera went 6 1/3 and allowed three earned runs, four hits and walked two. Under the hood, things weren’t as pretty — Cabrera struck out just two with four swinging strikes on 78 pitches. He cruised through his first six innings before falling apart a bit in the seventh (allowing a walk, homer, homer, and walk). Here was Cabrera’s pitch mix: 38% four seam, 31% changeup, 22% curveball, 9% slider. The best news about his debut was that he averaged 97 mph on his fastball.

Cabrera is 32% rostered and has a two-start week against the Phillies and Mets next week.

On the flip side, Gray went six innings deep and allowed two earned, five hits and three walks. He was inducing strikes at a higher rate and finished with seven strikeouts and 18 swinging strikes on 91 pitches. Despite Cabrera having his changeup comped to Felix Hernandez, it was Gray who was throwing the dominant change on Wednesday — 13 of Gray’s 18 swinging strikes came on his changeup. Gray had a 50% groundball rate in this start and only allowed one homer . This was very encouraging. He’s 79% rostered.

News and notes
Trevor Story left the game with a minor leg injury. The Rockies scored 15 runs in their doubleheader, Story went 0-8.
The Mets are optimistic that Jacob deGrom will be ready to make his return from the 60-day IL by the second half of September after the MRI he underwent Wednesday revealed nothing concerning.
Jack Flaherty was placed on the IL with a right shoulder strain. Mike Schildt said Kwang Hyun Kim is a candidate to start Sunday. Interested in re-adding Kim? He’s 42% rostered and could be worth the stash.
Mookie Betts will be activated on Thursday against the Padres.
On the other side of that game, Yu Darvish will make his return.
Triston McKenzie was placed on the IL with right shoulder fatigue, retroactive to Aug. 22.
Carlos Rodon will return Thursday and start against the Blue Jays. Would you start him in his first game back?
Alex Bregman made his long awaited return Wednesday. He hit sixth in the lineup and went 2-5 with a double and an RBI.
Jesse Winker has yet to resume baseball activities and remains “a couple weeks away” from returning from the IL.
George Springer will be re-evaluated after running the bases again Thursday and could be activated as soon as Friday.
Cavan Biggio has a Grade 1 UCL sprain in his left elbow and is considered week-to-week.
Matthew Boyd is penciled in to start Sunday against the Blue Jays. He’s 39% rostered.
Tejay Antone was placed back on the IL with that forearm strain.
Brandon Belt will likely go on the bereavement list Friday.
The Angels placed Reid Detmers on the IL without an injury designation, which means it’s COVID related.
Noah Syndergaard will begin a rehab assignment at High-A Brooklyn on Thursday.
After signing a one-year contract extension, Yadier Molina confirmed that 2022 will be his final season. Hall of Famer?
Chris Archer will start Sunday against the Orioles.
Dylan Bundy was placed on the IL with a right shoulder strain.
Sano makes for a sneaky add
Don’t look now, but Twins 3B Miguel Sano is heating up. He hit his longest home run of the season on Wednesday — 495 feet — his 22nd of the season. In his past 15 games, Sano is batting .255 with five homers. He’s just 54% rostered with six games next week. He’s worth adding cheap.