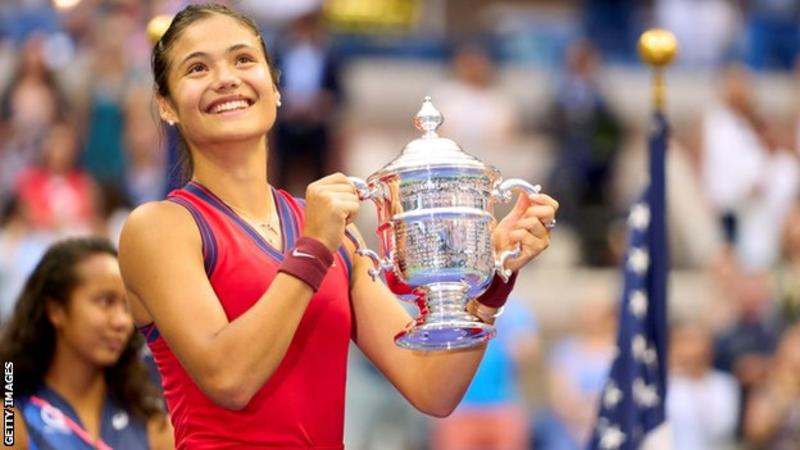 The 18-year-old became the first British woman in 44 years to win a Grand Slam singles title when she beat Leylah Fernandez in Saturday’s final.

On Monday she appeared on US talk shows and attended the Met Gala, before Tuesday’s visit to the US Stock Exchange.

“I have a few days’ rest and recovery – I think needed after the last seven weeks,” she told CNBC’s Closing Bell.

“But then I am straight back to training and hungry to get better and come back out and play some more tournaments.

Raducanu stunned the US Open field, coming through qualifying and not dropping a set throughout the tournament, to become the first qualifier to win a Grand Slam title.

Since then the new world number 23 and British number one has been the focus of media attention all over the world.

She could receive a wildcard to appear at Indian Wells in California, which begins on 7 October.

The season-ending WTA Finals take place in Guadalajara, Mexico in November and the eight players with the highest points tally this year will qualify. In that race, Raducanu has risen to 14th.

“After the US Open I wanted to give myself this week to completely switch off from tennis because it’s been an extremely intense but rewarding seven weeks,” she told the WTA Insider.

“I know I’ll get back to work probably Monday or early next week to get back to training again. Schedule-wise, I’m not sure. Maybe Indian Wells, I don’t know. I’m going back to London before my next tournament for sure.”

Live scores, results and order of play
Alerts: Get tennis news sent to your phone
Win the US Open? Are you kidding me? – McEnroe
Seven-time Grand Slam champion John McEnroe says he “meant exactly what he said” about Raducanu at Wimbledon, despite the British teenager’s sensational US Open win.

Raducanu retired from her fourth-round match with Ajla Tomljanovic at SW19 because of breathing difficulties and McEnroe was criticised at the time for describing the occasion as being “a little bit too much for her”.

Speaking on CNN, McEnroe stood by his comments but insisted they had been blown out of proportion and that he always intended to be supportive.

“I tried to relate it in a small way to my experience when I first went to Wimbledon, also at 18, and managed to qualify, like Emma did, and get through to the semis,” he said.

“She did better than I did – I played Jimmy Connors, I hadn’t been on Centre Court and I remember my legs shaking, feeling totally overwhelmed by the experience and almost happy that I didn’t win.”

He went on to praise Raducanu’s achievements in taking her maiden Grand Slam victory.

“More important than what I said is how she handled it moving forward, because I’m sure there was a lot of concern about she would handle this sort of newfound fame.

“I don’t think you could possibly do it any better,” he added.

“Win the US Open? Are you kidding me? That’s insane.”