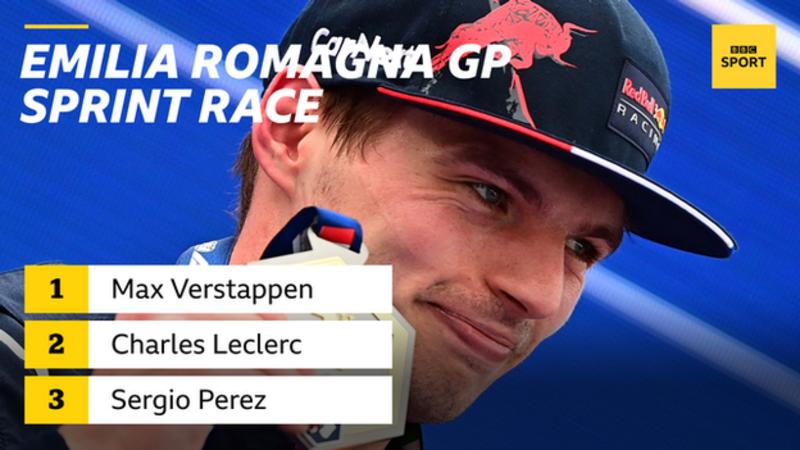 The result gives the world champion pole position for the start of the main race on Sunday, and reduces his deficit in the championship to 45 points.

Verstappen started the sprint from pole but lost the lead at the start.

But he bided his time before coming back at Leclerc and passing around the outside on the penultimate lap.

Red Bull’s Sergio Perez fought up from seventh on the grid at Imola to finish third, while Ferrari’s Carlos Sainz moved up from 10th to take fourth.

With more points awarded for the sprint event this year, Sainz’s fourth place moves him ahead of Mercedes’ George Russell into second place in the championship, 40 points behind his team-mate.

Perez closed up quickly on Leclerc in the final laps to finish just 1.7 seconds behind the championship leader.

Leclerc blamed too much tyre consumption for his loss of pace in the final part of the race.

Behind the top four, McLaren’s Lando Norris and Daniel Ricciardo took fifth and sixth, ahead of Alfa Romeo’s Valtteri Bottas and the Haas of Kevin Magnussen, who dropped down from fourth on the grid to take the final point awarded for eighth.

Russell and team-mate Lewis Hamilton had a day to forget, finishing 11th and 14th respectively and failing to make up any ground on their disappointing grid positions, the seven-time champion even dropping back one.

Verstappen said: “I don’t know what happened at the start, it was just really bad. Initially it looked like Charles had a bit more pace but then he ran into trouble with the tyres.

“With other tyre compounds coming into place tomorrow, it might look a bit different.”

Leclerc said: “It is still a front-row start, we struggled with the tyres at the end, so we need to analyse that for tomorrow. But the pace was good until then. We started to have some graining at the end.”

He then switched to Italian to tell the tifosi who had cheered him throughout: “Tomorrow is another day.”