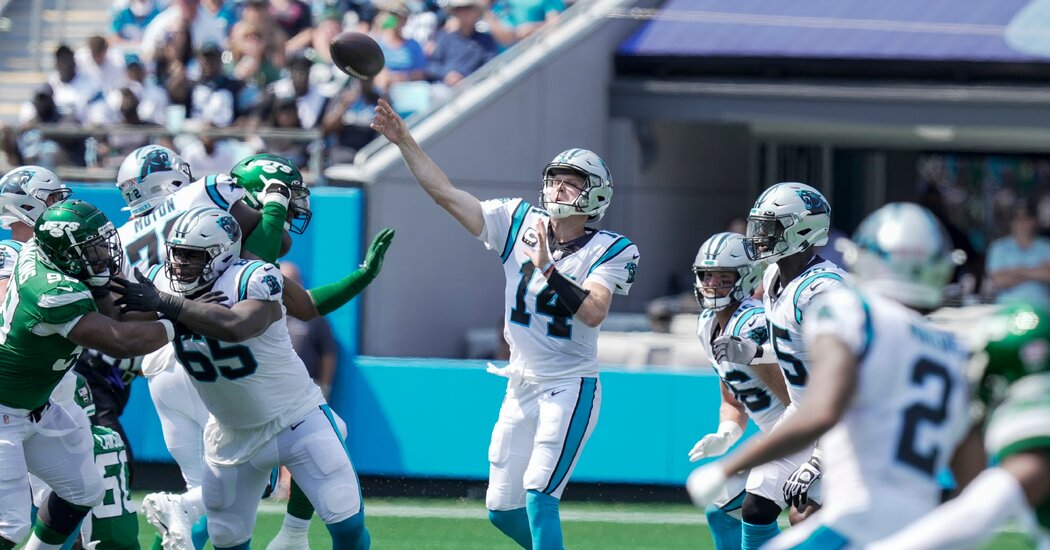 CHARLOTTE, N.C. — Sam Darnold threw for 279 yards and a touchdown and ran for another score against his former team as the Carolina Panthers defeated the Jets, 19-14, on Sunday to win a season opener for the first time since 2018.

Darnold connected on a 57-yard touchdown pass with another ex-Jet, Robby Anderson, and took full advantage of a having healthy Christian McCaffrey, who accumulated 187 yards from scrimmage on 30 touches after missing 13 games last season with injuries.

Carolina’s defense brought the pressure on Jets quarterback Zach Wilson, sacking him six times and intercepting him once. Wilson, a rookie drafted second overall, kept battling, though and finished 20 of 37 for 258 yards with two touchdown passes to Corey Davis in his first career start.

Darnold, acquired from the Jets for three draft picks this past off-season, struggled in the red zone early. He turned over the ball on a botched handoff that hit his fullback’s arm and the Panthers had to settle for a short field goal by Ryan Santoso on another possession.

But the momentum changed midway through the second quarter when the Jets went for it on fourth-and-inches near midfield, and Panthers defensive end Yetur Gross-Matos tackled Tevin Coleman behind the line of scrimmage.

On the next play, Darnold found Anderson streaking down the middle of the field for a 57-yard score. Darnold then made it 16-0 on the next drive when he scored on a 5-yard touchdown run on a quarterback draw as the Panthers outgained the Jets 282-72 in the first half.

Wilson spent the better part of the game under heavy duress, pressured on 10 of his 19 drop backs in the first half. He was 0 for 7 passing on those pressures and took three sacks, according to ESPN Stats and Info.

The final sack Wilson took came with two minutes left, when his head hit the turf hard after getting landed on by the 320-pound defensive tackle Derrick Brown. But he stayed in the game and connected with Davis with 1:56 left to cut Carolina’s lead to 19-14 and give his team a chance.

But the Panthers put the game away on the final drive on an 18-yard run by McCaffrey.

Despite the pressure, Wilson had some bright spots including the late touchdown toss and a 22-yard scoring pass to Davis late in the third quarter when he rolled out of the pocket to buy time.

Mekhi Becton, the Jets’ starting left tackle, left in the second half with a knee injury and did not return. Saleh said Becton was still being evaluated and had no word on the extent of the injury. The Jets will host the New England Patriots next Sunday, while the Panthers will host the New Orleans Saints.