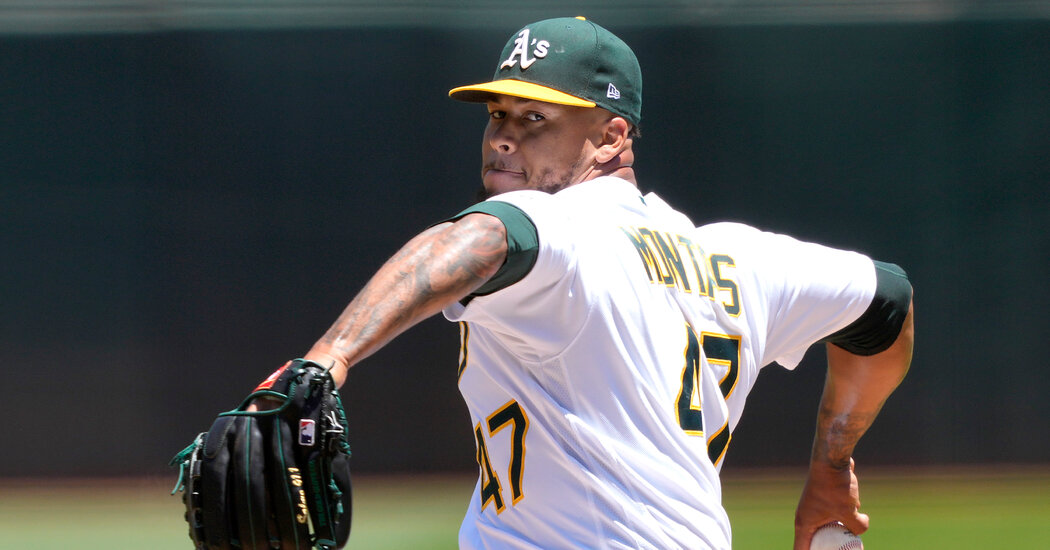 The best teams need to do the most work at the baseball trading deadline. This would seem counterintuitive, because the best teams tend to have the fewest needs. But if a team is really good, the hardest part is over: you know you’ll be playing in October. Trades are all about boosting your odds once you get there.

“Teams are trying to make a move that will make an impact,” Yankees reliever Aroldis Chapman said through an interpreter on Monday, recalling his trade to the Chicago Cubs in 2016. “When I got there — where the team was and where the team was heading — they felt they had a real shot at winning.”

The Cubs had the best record in baseball when they acquired Chapman in a trade with the Yankees. They estimated that Chapman would raise their chances of winning the World Series by 5 percent — a big number for a single player, actually. With Chapman pitching in all but one of their postseason victories, the Cubs won it all.

On Monday they made two deals, acquiring starter Frankie Montas and reliever Lou Trivino from the Oakland Athletics and reliever Scott Effross from the Chicago Cubs. Last week, they got left fielder Andrew Benintendi from the Kansas City Royals. In all, the Yankees gave up eight prospects, including seven pitchers. Only one, J.P. Sears, has played in the majors.

“You can always improve,” said Aaron Judge, whose 43rd homer helped the Yankees to a 7-2 victory over the Seattle Mariners on Monday night. “I don’t think this team is satisfied with what we’ve done so far. We’ve gotten out to a great start, but we kind of, as a team, did our part — and the front office is doing their part now.”

Two of the pitchers General Manager Brian Cashman sent to Oakland ranked among the Yankees’ top 10 prospects, according to MLB.com — Ken Waldichuk (fifth) and Luis Medina (10th). Montas, though, is under team control through next season and gives the Yankees the kind of top-level starter who could make an outsize impact in a postseason series.

“He’s got the full arsenal and the weapons and the stuff that you look for in top-of-the-rotation caliber pitchers,” Manager Aaron Boone said. “And he’s gone out and proved that the last couple of years, that he is that kind of caliber of pitcher.”

The right-handed Montas, 29, served an 80-game suspension in 2019 after testing positive for a performance-enhancing drug. He struggled the next year but has a 3.30 earned run average in 51 starts across the last two seasons, with a mix of power pitches (96 mile-per-hour fastball, plus a slider and splitter) that make him effective against both left- and right-handers.

Effross, 28, is not a hard thrower but has a similar assortment of pitches to handle hitters from either side. As a right-handed sidearmer with a fastball, slider and changeup, he is the kind of reliever who tends to get a lot of work in the modern, bullpen-heavy postseason.

Effross, who has a 2.66 E.R.A. in 44 innings, has been much more effective this season than Trivino, who has a 6.47 E.R.A. in 32 innings. But the Yankees attribute much of that to bad luck, and Trivino is averaging 12.7 strikeouts per nine innings — a better strikeout rate than any of his new teammates.

Add those three arms to Benintendi — a solid left fielder with plate discipline who hits for contact — and a pattern emerges. These are players with the kinds of skills to make a difference in short series against good teams.

“You can’t have too much depth, especially these next two months and then into October,” said first baseman Anthony Rizzo, who hit a three-run homer in the first inning Monday. “I think it’s a big tribute to us in this clubhouse, since spring training, in setting the tone. When the front office comes and makes big moves like this, it just kind of backs us up.”

There are some reasons for concern. Montas had shoulder inflammation in early July and needed a cortisone injection; he rested for two and a half weeks and has made two starts since, for three innings and five innings.

The Yankees have another starter, Luis Severino, who is out with a shoulder issue of his own. He played catch on Monday, which is encouraging, but a long way from a game.

“He gave me the thumbs-up,” Boone said. “Good start to the throwing progression.”

Even so, the Yankees placed Severino on the 60-day injured list on Monday, which means he cannot be activated until mid-September. Now they have his replacement, with bullpen reinforcements and a new left fielder, too. It is an impressive haul for a team seeking its first championship since 2009 — a team that needed to be aggressive, and acted that way.