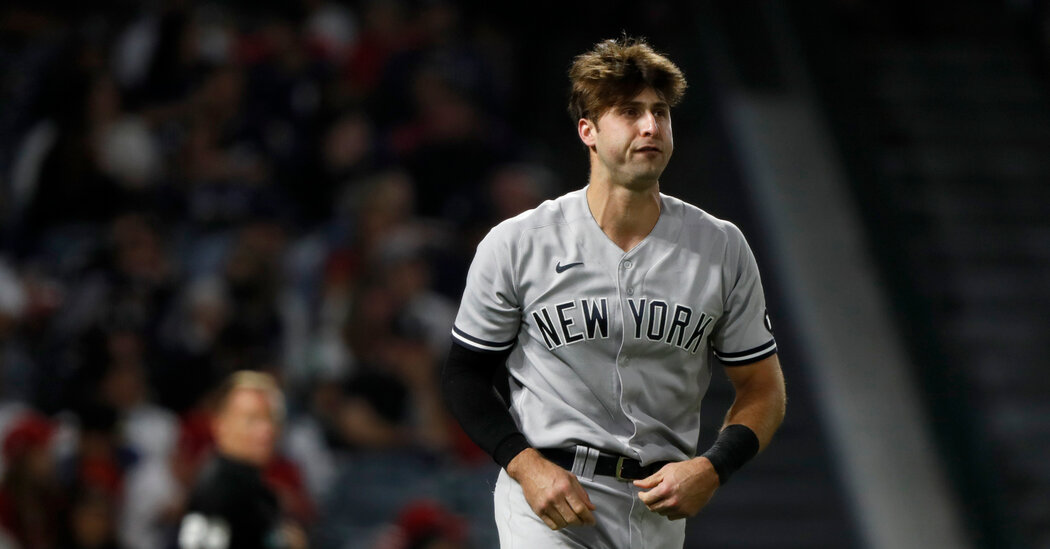 ANAHEIM, Calif. — Anthony Rizzo bounded onto the field during batting practice here Monday afternoon to offer an enthusiastic greeting to his former manager, Joe Maddon. The two, who will always be linked together in the high-definition images of the Chicago Cubs’ 2016 World Series title, stood and visited for several minutes as the Los Angeles Angels finished batting practice and the Yankees started.

Shortly afterward by the Angels’ dugout, Maddon gushed about one of his favorite players who became something of a baseball son to the manager in those heady days in Wrigleyville. But during their conversation, Maddon said with a chuckle, Rizzo took it just a bit too far. He asked what the skipper thought of his swing.

“I ain’t telling him that until Wednesday,” Maddon said, meaning after the three-game series finishes.

That isn’t the only secret Maddon and his team is keeping from the Yankees this week.

The Angels’ 6-4 win Tuesday night followed an 8-7 victory in the series opener on Monday and, suddenly, the Yankees’ 13-game winning streak had U-turned into a four-game losing streak.

“Unacceptable,” Yankees outfielder Brett Gardner said, sizing up a situation in which all of the Yankees’ gains during the winning streak have now been lost.

When it started, they were 7.5 games out of first place. By the time they grounded into — count them — five double plays on Tuesday and dropped another game to the Angels, they trailed first-place Tampa Bay by eight games. This despite Los Angeles having been without the superstar Mike Trout (strained calf) since May and the slugger Anthony Rendon (hip surgery) since early July.

As another World Series-winning manager, Jim Leyland, was fond of reminding after a difficult day in the major leagues, “Hey, the other guys drive Cadillacs, too.” Translation: Even the underachievers are pretty good in this league.

Aaron Boone will get there one day, he and the Yankees hope. Preferably even to this year’s Fall Classic. But with September about to begin, it’s still sometimes difficult to decipher between what is real and what is a mirage.

Corey Kluber, a two-time Cy Young Award winner, rejoined the rotation for the first time since May (right shoulder strain) on Monday and threw three no-hit innings at the Angels — only to surrender a grand slam to Jack Mayfield in the fourth.

Jameson Taillon, who was 7-0 with a 3.05 E.R.A. over his past 13 starts dating back to June 18, and who was undefeated over a career-high 15 starts dating to June 8, followed Kluber on Tuesday by also throwing three no-hit innings — before surrendering a three-run homer to Jared Walsh in the fourth.

Then, in the fifth, Shohei Ohtani, swiped home on the back end of a delayed, double steal during another three-run inning. He pitches (though not Tuesday, as the Angels pushed his scheduled start back after he was hit by a pitch last weekend), he hits, he runs. It’s as if there are three or four of him.

“We’ve obviously been playing really good baseball for a while now,” Gardner said. “Obviously, these last few days, it’s four games by a total of six runs. We’ve had the opportunity to change the outcome, we just haven’t been able to.”

Notably, when Joey Gallo, the team’s all-or-nothing slugger, grounded into a double play in the fourth inning on Tuesday, it was the third time he had done so in his past nine at-bats. As Sweeny Murti of WFAN pointed out on Twitter, Gallo had hit into only nine double plays in his first 1,920 major league at-bats.

Or, as Maddon said of Fletcher, “That was a virtuoso performance at second base.”

So as they looked to pitcher Gerrit Cole to stop a losing streak in Wednesday’s series finale, Gardner said the way he chooses to view the Yankees’ current status is having won 13 of their past 17 games.

In Chicago, the Cubs started play on Tuesday 6-20 in August, the team’s fourth-worst calendar month of at least 25 games in its history, according to the Elias Sports Bureau.

Here, Maddon and his club are tormenting a team that, as of a week ago, couldn’t lose — even though Rizzo was 4 for 8 with a homer, two doubles and a single in the first two games of this series and had reached base in five of nine plate appearances.

Spoiler alert for that Maddon evaluation on Wednesday: Rizzo’s swing looks pretty good. As for his other secrets, well, the Angels now have beaten the Yankees in four of six games in 2021. Mum’s the word.

Meanwhile, as the Yankees try to sort things out, the can’t-lose Tampa Bay Rays have won nine in a row.

“My focus is on the New York Yankees at all times,” Rizzo said. “There’s going to be other teams playing good baseball, but as long as we take care of ourselves. It’s Sept. 1 tomorrow and we’ve just got to adjust, continue to play good baseball and in two or three weeks, we’ll stick our heads up and see where we’re at.”