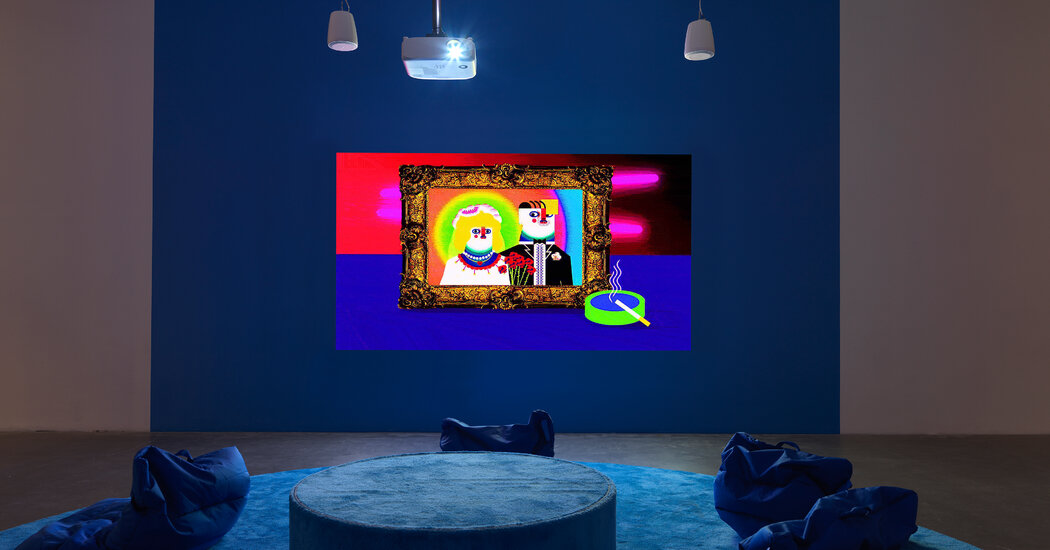 Wong Ping’s animations give us a glimpse into a strange inner world — a world of hapless and depraved characters caught in a sequence of surreal plot twists.

The New Museum show “Wong Ping: Your Silent Neighbor,” through Oct. 3, features six of this Hong Kong artist’s engaging animated works, which started turning up in prestigious exhibitions worldwide after he left a tedious postproduction job in TV and founded Wong Ping Animation Lab in 2014.

With his deliberately crude creations, Wong seems determined to spurn the polished world of high-end TV. His characters are built from basic geometric forms. Scenes are rendered in cyans, reds and lime greens that will unleash memories (if you have them, and I do) of “surfing the web” on dial-up internet. But even if they look childishly simple, the videos are very adult. Adult because they’re obscene. Adult because they’re world-weary.

Fate repeatedly washes people to sea and spits them back on shore in these animations. Their rapid-fire plot reversals can make you feel as though you’re watching something between a stoner movie and the whirl of pixelated cherries across a video slot-machine screen.

The protagonist in “Wong Ping’s Fables 2” (2019) is an anthropomorphic bull who accidentally impales a cop to death at a political protest and is then sexually assaulted in prison. He also uses his time behind bars to write a Ph.D. dissertation on the immorality of slow-cooked beef. Later, out of prison and penniless, he sells the jeans off his body. Surprise! They go for good money. Ripped jeans are chic, turns out. Soon, he builds a fashion empire and becomes one of Hong Kong’s richest animals. And that’s not even the first half of the plot.

Wong’s show deserves attention — and not just because the works are funny. Their NC-17 content is hard to overlook, and may be hard for some to stomach. Still, fixating on their shock value misses the point. With their sly humor, the works, in the end, are tragicomedies. They’re full of characters trapped by quirks and perversions, then also buffeted by forces beyond their control.

The videos’ somber voice-overs do a lot to set the tone. Wong’s first-person male narrators hark back to the lonely, watchful detectives of Hong Kong’s neo-noir films, for whom all manner of shock and gore was just another day on the job. Even flat-out helplessness is described with stoicism. In “Jungle of Desire” (2015), the narrator, an impotent and badly paid animator, watches as his wife becomes a sex worker who receives her clients at home. He tries to stay outside and give her space, but Hong Kong’s public spaces won’t cooperate. They’re full of hostile architecture (“spiky things”) and people who wake anyone sleeping in a park. So the main character ends up hiding in a closet at home while his wife’s clients stop by.

Often, Wong’s videos treat women with fascination and revulsion. There’s a puerile focus on their body parts: breasts, varicose veins, feet. This might not sound exactly like high-priority viewing to you, especially as #MeToo has renewed scrutiny of the disproportionate airtime and shelf-space given to tales of straight male desire. Perhaps you’ll be more inclined to see these works if I add that they’re not quite about a power imbalance between a lecherous man and helpless woman. If there’s a power imbalance here, it’s between people and the realities overwhelming them. Stagnant wages. Corrupt law enforcement. The loneliness of screens and devices.

Political anxieties hover at the show’s edge like a ghost barely acknowledged by the living. In “An Emo Nose” (2015), a man’s nose lengthens when it senses “negative energy.” To placate it, the man stops talking politics and gives his nose access to sex and ice cream. (In this scene, the petals of the flower on Hong Kong’s flag wilt and fall.) Elsewhere, the main character in “Who’s the Daddy” (2017) mistakes a dating app for one to help him find friends of a similar political stripe.

At many moments, Wong’s videos had me thinking back to the artist Mike Kelley and his friends, whose messy abject work took the art world by storm several decades ago. Kelley, who died in 2012, knew how to walk the line between sadness and provocation, whether he was exhibiting torn stuffed animals or showing an artwork by the serial killer John Wayne Gacy in a project about artists and criminality. Granted, Kelley’s art was often set against the backdrop of American working-class suburbs, while Wong’s work unfolds across urban Hong Kong. But as Kelley did to great effect, Wong seems to mine his own sense of inadequacy and depravity to get at something bigger: how sociopolitical realities fuel the disappointments of grown-up boys who can’t be men.

Even the exhibition design of “Wong Ping: Silent Neighbor” seems to partly channel Kelley, who had a thing for ratty fabric, knitted afghans and plush toys. The main room of Wong’s show — which was organized by Gary Carrion-Murayari with Francesca Altamura, a former curatorial assistant — has a central mound of beanbag chairs and a shag-carpeted platform. It’s where visitors can recline while watching Wong’s animations on surrounding screens.

There’s no illusion of cool sterility to this seating arrangement, which feels significant given how often Wong’s animations allude to hygiene, the body and public space. Take the germ-conscious city dwellers in “The Other Side” (2015), who use only their lower bodies to push through turnstiles. They’d surely view beanbag chairs with some hesitation. You might, too, as a visitor to this show. If you stand, you’ll have to let the discomfort of your stance compound the discomfort induced by these artworks. Or you’ll go for it: You’ll hunker down on a soft patch of fabric, and accept a full-body immersion into Wong Ping’s weird debased world.