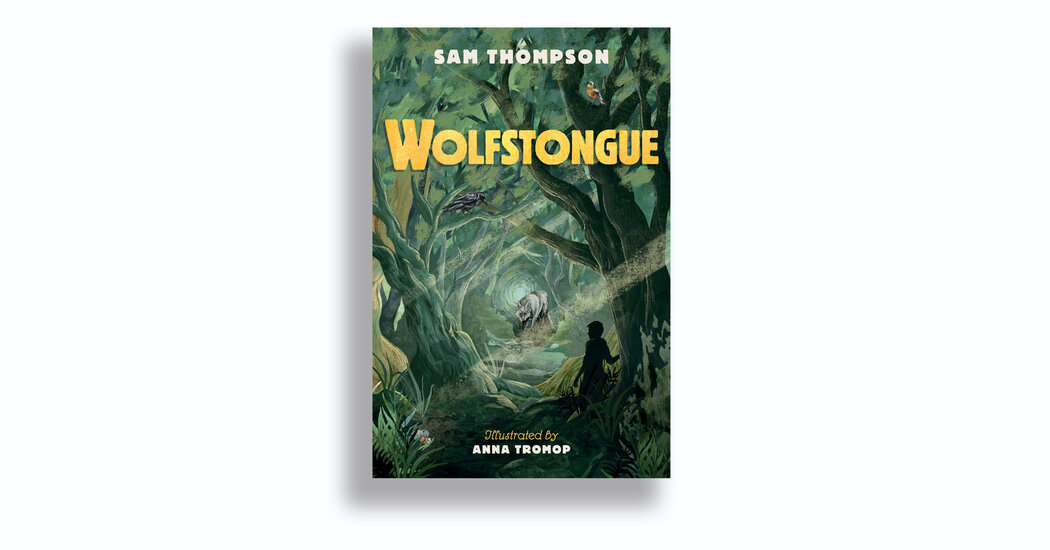 Silas, the hero of the acclaimed British novelist Sam Thompson’s first book for children, “Wolfstongue,” can’t talk. Or at any rate he doesn’t talk very often, or very well. “People spoke to him and waited for a reply, but the words he meant to say got stuck.” Maybe he’s got a stutter, maybe it’s some more profound speech dysfunction — we’re not sure. The kids at school make fun of him. They call him Silence.

You know who can talk, though? Foxes. They’ll do it all day long. They’ll talk you out of your freedom, your family, your identity, even your life. There are plenty of books out there that rehabilitate foxes, liberating them from their Aesop-era reputation as crafty schemers. “Wolfstongue” takes them back to their grifting roots. These foxes are not fantastic.

Silas’s story starts not with a fox but with a wolf. They meet unexpectedly after school on a bike path. Silas is alone, as usual, and he’s terrified of this large, fierce beast, but the wolf just needs him to remove a (rather Aesopian) pin from his paw. He leads Silas into a forest that somehow lies all around them, woven magically through the city in which Silas lives. Silas thinks he’s being taken to another world. The wolf corrects him: “There’s only one world,” he says. “Your species lives here too. You just don’t notice most of the time.”

The wolf’s name is Isengrim. It was a fox who gave him that name, and that is where all his troubles began.

One of the novel’s themes is the power — in every sense of the word — of speech. For the foxes, language is a means of manipulating other animals, of imposing their foxy will on them. When the foxes named Isengrim, they gained power over him.

The wolves, on the other hand, aren’t meant to speak. Language saps their power. “Until the foxes taught them the words for sadness and fear, they had not known what it was to be sad and afraid. But now they knew, and because of this they began to lose their strength.”

The foxes enslaved the wolves and put them to work building a vast underground city. Isengrim escaped with his pregnant mate, Hersent, and the foxes are hunting them. The wolves are looking for a human child whom they call Wolfstongue: “The child would be our voice, so that we would not need to speak any longer. So that we could live as wolves ought to live. Free from words.” Silas, the only human child on the scene, is the obvious candidate, and talking isn’t his strong suit. To save the wolves he will have to find his voice.

“Wolfstongue” unfolds from Silas’s perspective, which gives the book an inward feel. He’s not the bubbly, bantering sort of point-of-view character (the book’s somber, old-fashioned black-and-white drawings, by the Norwegian illustrator Anna Tromop, intensify the mood). There are some hard choices in his story, and Thompson’s writing vividly conveys the force with which nature and wildness strike an introverted city boy: “The ordinary atmosphere of the city — its stale and reheated air, its low grumble of traffic, its thin cloudy light — had been whisked away like a dust sheet. … Swaying shadows and leaves made droplets of brightness and an endless whispering that wove with the warbling of birds to a vast hush, a sound bigger and deeper than silence.”

But “Wolfstongue” isn’t just about nature. As in George Orwell’s “Animal Farm,” the dynamics of oppression and resistance that play out between animals mirror those between humans. When Silas goes to the forest, he sees the same things he struggles with in the schoolyard, writ large, in the war of wolves and foxes. As Isengrim so sagely put it, there’s only one world.

Lev Grossman’s latest middle grade novel is “The Golden Swift,” a sequel to “The Silver Arrow.”