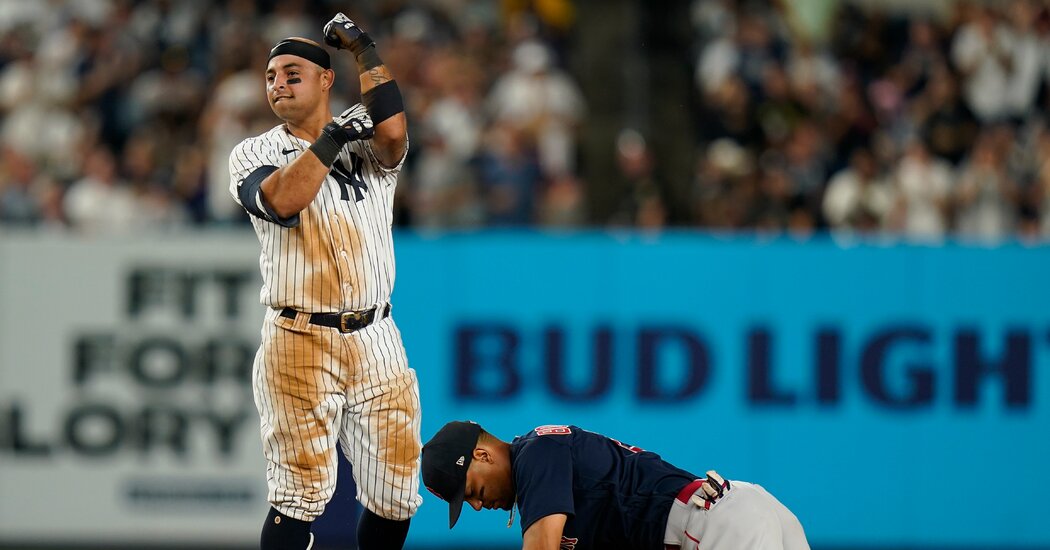 On July 4, the Yankees were a mess.

They weren’t hitting, pitching or fielding well. Their record (42-41) and playoff prospects (five and a half games out of the second American League wild card spot) reflected it. Fans wanted people fired. And only days before, General Manager Brian Cashman warned that changes were coming if the team’s play didn’t improve, bluntly saying the team was as bad as it could be.

That felt distant on Tuesday at Yankee Stadium, where the roars from the stands and the home dugout throughout the day were the latest proof that the Yankees’ trajectory has changed dramatically. And that momentum carried through to Wednesday when the Yankees finished off a three-game sweep.

As the dust settles from an eventual two days, the Yankees lead the Oakland Athletics for the American League’s top wild card spot. By sweeping Boston, the Yankees caught up to the sputtering Red Sox and then leapfrogged them in the playoff race by a percentage point (a .570 winning percentage to .561). It is the first time since May 15 that the Yankees had a share of second place in their division.

In a matter of six weeks, the Yankees have not only erased a sizable deficit but a lot of doubt about their prospects. They were among the preseason favorites to contend for a division and World Series title, but the Yankees showed only fleeting glimpses of that over the first three months of the 2021 campaign. A solid May was sandwiched by a maddening April and June.

There were injuries, sure, but that hadn’t stopped the Yankees, a team with a lot of resources, in previous seasons. Their hitting, though, long a strength, was suddenly failing them. Coupled with poor defense, and troubles on the mound in June, it seemed like the team was going nowhere.

To make matters worse, their rivals were sending them further into a tailspin. The Yankees began the season with seven straight losses to the Red Sox, who initially weren’t expected to be a top contender but sat in the first place in the A.L. East for most of the year. On July 4, perhaps the nadir of the Yankees’ season so far, the Red Sox had an A.L. best 53-32 record and led the Tampa Bay Rays by four and a half games in the division.

The roles, though, have flipped thanks to the Yankees’ improved play, unlikely contributions from fill-ins, and a jolt of talent acquired by Cashman before the July 30 trade deadline. Undermined by poor defense and pitching of late, the Red Sox have gone 16-22 since July 4 while the Yankees are a major league-best 27-11. (The defending A.L. and division champion Rays surged into first place on July 31.)

“It’s a team that has a lot of heart and is playing with a lot of confidence,” Yankees Manager Aaron Boone said of his squad, adding later, “It’s great we’ve climbed back in, but we’ve got a long way to go.”

But how far the Yankees have come already showed on Tuesday. In the second game of the doubleheader, a 2-0 win, the Yankees toppled the Red Sox All-Star pitcher Nathan Eovaldi with solo home runs from Giancarlo Stanton and Voit. Rookie pitcher Luis Gil extended his scoreless streak to 15⅔ innings, making him the first pitcher in major league history to have a scoreless start in each of his first three career appearances, according to the Elias Sports Bureau.

The battery of pitcher Jordan Montgomery and catcher Gary Sanchez, both of whom were returning from the Covid-19 injured list, allowed three runs over four and two-thirds innings in the first game of the doubleheader, a 5-3 win.

And reliever Jonathan Loaisiga, carrying a heavier load because of an injury to closer Aroldis Chapman and the ineffectiveness of Zack Britton, tossed two strong final two innings. It was the fourth straight game in which a different Yankees pitcher (Albert Abreu, Wandy Peralta, Chad Green and Loaisiga) recorded the save. Neither Abreu nor Peralta was on the Yankees’ opening day roster.

“We’re playing good baseball,” said Montgomery, whose rotation mate, ace Gerrit Cole, also returned from the Covid list the day before and also guided the Yankees to victory. “I’m glad I could come back and not mess this up.”

A midseason roster shake-up also helped. Over the years, a flaw of the Yankees’ offense was that it had become too right-handed. So Cashman traded for left-handed hitters Anthony Rizzo, a World Series-winning first baseman with the Chicago Cubs, and Joey Gallo, a star outfielder with the Texas Rangers.

With Rizzo having returned from the Covid-19 injured list on Wednesday and having started at first base, the Yankees now have a problem they didn’t have often earlier in the season: too many healthy, capable players for too few spots. Voit, whose playing time was threatened by the Rizzo trade, stumped for himself.

“I finally feel like I’ve hit my stride after getting a week’s worth of games under me,” he said, then noted that he finished in the top 10 in the voting for the A.L. Most Valuable Player Award in the pandemic-shortened 2020 season.

“I’ve been a great player for this organization for the last three years and I’m not going down,” he continued. “I want to play. Obviously I know it’s going to be tough with Rizzo but I deserve to play just as much as he does. I led the league in home runs last year and I feel really good again. Obviously the injury bug is the reason he’s here, because of me. But I hope Boonie can do whatever he can to try to give me some consistent at-bats.”

Stanton said his recent move back to the outfield from the designated hitter spot in the lineup would help create room for Rizzo and Voit. “We’re dangerous all around and that just makes us even more,” he said.

Before Wednesday’s game, Boone said he had a productive chat with Voit about playing time. He said he envisioned Voit helping out at first base and at designated hitter when Stanton was sometimes in the outfield. The singular goal, he said, was winning.

“We’ve got to play really good baseball if we want to get to where we have to go,” Boone said the night before. “So whether we’re chasing, ahead — whatever — we’ve got to play well. We got a little over 40 games left. It’s nice that we’re in a position that we’re in control of what we do and we’re in control of our season. But the bottom line is, really, we haven’t done anything yet.”