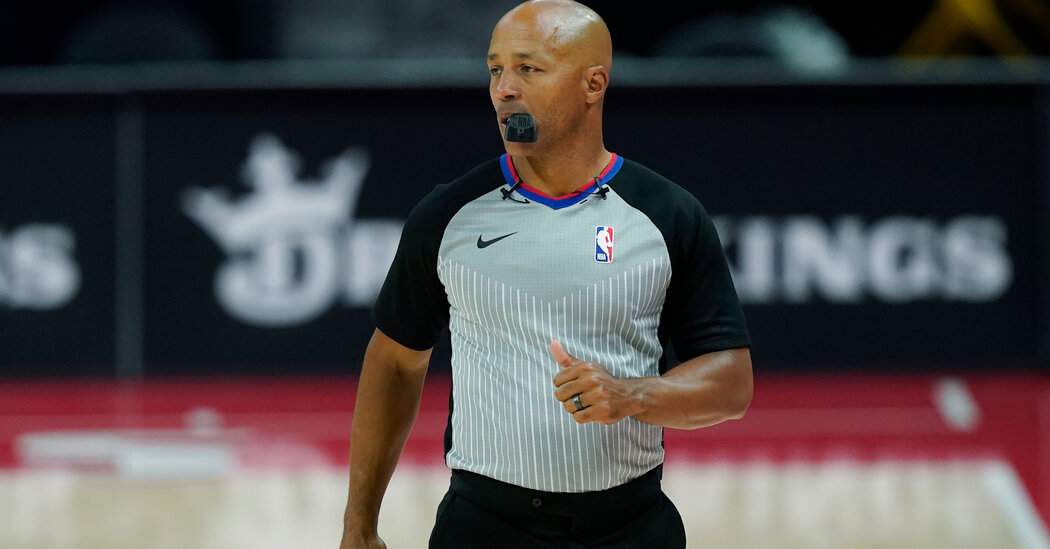 Late last month, the N.B.A. sent out a short news release announcing an agreement with the union representing the league’s referees to mandate Covid-19 vaccines. It stipulated that all referees must to be fully vaccinated to work games, including “recommended boosters.”

The announcement came after a tumultuous N.B.A. season in which several referees had to miss games because they had been in contact with someone who had tested positive, sometimes forcing the league to call up G League officials to fill the gap.

The agreement was notable at a time when labor unions across various industries have been split on whether to agree to vaccine mandates for their members. Some unions, like the American Nurses Association, have supported mandates out of concern for members’ health, while others, most prominently police unions, have pushed back against mandates, saying they infringe on members’ rights to make their own health decisions.

The issue has become highly politicized, as have many restrictions around the virus. Vaccine mandates have long been common in schools and colleges, and are routine for travel between countries.

The National Basketball Referees Association represents 145 members who officiate N.B.A., W.N.B.A. and G League games, in addition to 50 retirees. Their agreement stands out in the sports world, and even in their own sport: No such mandate exists with N.B.A. players, creating a potentially awkward situation where some league employees are mandated to take the vaccine and others aren’t. (The league, however, has handed down guidance players on the Nets, Knicks and the Golden State Warriors must be fully vaccinated to play at home, since local rules stipulate that only vaccinated individuals can enter arenas.)

The N.B.A. players’ union did not respond to a request for comment on where it stands on vaccine mandates. In June, the W.N.B.A. announced that 99 percent of its players had been fully vaccinated. A spokesman for the N.B.A. said that number was approximately 85 percent for N.B.A. players, and that the league was “in discussions with the union on a variety of topics for the season including vaccinations.”

The N.F.L. and M.L.B. do not have similar agreements with their referees or their players that the N.B.A. has with its referees. The N.H.L. does not mandate its players to get vaccinated and the league did not respond to inquiries about whether that extended to on-ice officials. A spokesman for M.L.B. said that the league strongly recommends vaccines for all umpires and is now considering “adjustments” in light of the recent Food and Drug Administration approval of the Pfizer vaccine, but did not say whether that would mean a mandate. In March, the head of the M.L.B.’s players union, Tony Clark, said that the group he leads was against a mandate.

Marc Davis, the president of the basketball referees’ union and a referee himself for more than two decades, said in an interview that the agreement was born of a strong relationship with the N.B.A., and the referees were broadly in favor of the mandate.

This conversation has been edited and condensed for length and clarity.

Can you tell me how the vaccine mandate came about?

When you have a collaborative environment between management and labor, I think you’re constantly always working through issues and there’s a constant dialogue back and forth.

I think if I would have to say who introduced the idea, I think it’s more the relationship and the constant conversation that came up. I mean, clearly, this was something that’s really consistent with both of our mission statements, which is to provide for the care and safety and security of our members and their families.

It’s a shared view of vaccines that they are probably one of the top three inventions in the history of humankind. And to have this access to this innovative vaccine and allow us to continue to work, to do our business and to continue to work collaboratively, it’s not that difficult of a conversation to begin and to work through.

What’s the value of the mandate for the referees’ union if the players haven’t agreed to one?

Well, first of all, we’re our own independent group, and I think that the players will come to some agreement. They’re working out their issues as well. They may have different issues than we had or just a different pace. I can’t speak to them, but I’m certain that they will work through their issues as well.

The benefit of the mandate is that our officials are flying commercially. They have families they’re coming back to. We’re engaged in the business of basketball. We’re in intimate environments with our players. We recognize the importance of the vaccine. I think this will all work itself out on all levels among all leagues.

Was there a significant amount of resistance from those within the union whom this would affect?

From a numbers perspective, I would say no. But their voices were heard. We articulated their concerns. We worked through those issues. A principle issue that was of concern was the F.D.A. approval. And we worked through that issue to where one of the things we negotiated was that no one would be required prior to F.D.A. approval. So that’s kind of a common-sense approach to it. You know, obviously, F.D.A. approval came at or about the same time that we reached the agreement.

With the understanding that the players are your co-workers, was there resistance along the lines of ‘Why should we agree to a mandate if the players haven’t agreed to one?’

No, because we know that when we initially began our conversations that they had begun conversations as well. We just reached an agreement prior to them. We did it at our own pace. We weren’t concerned with another group’s decision.

How much did you follow what other labor unions were doing as you were doing your negotiations? Were you in touch with other referee unions?

We were in constant communication with the players’ association. We were in constant communication with the hockey, baseball and N.F.L. officials. Other labor unions, like the Southwest Airlines mechanics, the United Airlines employees. They had some very difficult things and they weren’t able to work through them. It turned out to be something other than what we agreed to. We just didn’t have that experience with the N.B.A. It never became a contentious butting of heads.

Do you believe that the players’ union should agree to one in the same way that you guys have?