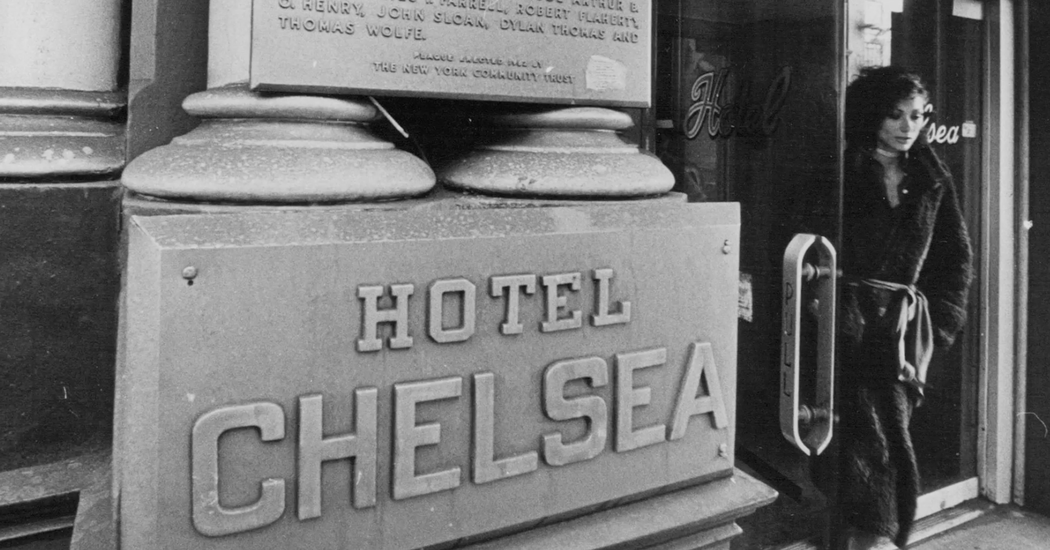 You might think of them as solitary creatures, furiously scribbling or typing alone, but as long as there have been writers in New York City, they have socialized together in an assortment of bars, restaurants, apartments and clubs.

The Times began writing about these places in its very first issues. In 1910, it published an article lamenting “the passing of the literary haunts of New York,” noting that many once-famous gathering spots were being razed as the city grew and modernized. “Number 19 West 24th is gone,” the piece began. “At least the old 19 is gone, and … no account has been made of the fact that it at one time housed the Author’s Club, and that its rakish stairs were somewhat worn away by the feet of Matthew Arnold, Whittier, Lowell and Field.” The article went on to list more than a dozen locations that were no more, including Pfaff’s beer cellar, where Walt Whitman liked to drink, an unnamed restaurant at 5 Barclay Street where Edgar Allan Poe ate with fellow writers and The Den, where James Fenimore Cooper and friends gathered.

Pfaff’s, The Den and the rest may be long gone, but over the decades, dozens, if not hundreds, of other establishments popped up to take their places. Here, we celebrate a few of the most memorable ones.

The turreted red brick Victorian building that looms gracefully over West 23rd Street between 8th and 9th is one of New York’s most famous literary locales, immortalized in music, movies and literature. In her history of the hotel, “Inside the Dream Palace,” Sherill Tippins described it as “a veritable Ellis Island of the avant-garde.”

In 1978, The Times sent a reporter to explore this “roof for creative heads.” The hotel’s manager told him that “writers come here to work,” lured by the cheap rent and the rosewood-beamed rooms, many of which had three-foot-thick walls.

In her Pulitzer Prize-winning memoir, “Just Kids,” Patti Smith described the Chelsea as “an energetic, desperate haven for scores of gifted hustling children from every rung of the ladder.”

William S. Burroughs finished “Naked Lunch” when he lived at the Chelsea. Thomas Wolfe, who holed up in Room 829 in the last years of his life, wrote several books there, including “You Can’t Go Home Again.”

The playwright Arthur Miller moved in after he separated from Marilyn Monroe. “Thank God the Chelsea has never been respectable,” he told The Times, “and with the present management it never will be.”

The philosopher Simone de Beauvoir once had a room at the Chelsea. So did Mark Twain (who liked to hold court in the dining room), O. Henry and Arthur C. Clarke, who told The Times, “This place is my spiritual home.”

Established in 1880, this West Village bar was a prime literary hotspot in the 1950s.

The Welsh poet Dylan Thomas reportedly had his last drinks at the White Horse before he went into a coma and died in 1953.“I’ve had my 18th straight whisky and I think that’s the record,” he told a companion.

As the Greenwich Village Society for Historic Preservation once pointed out, the Beat writer Jack Kerouac “apparently was bounced from the White Horse more than a couple times, leading someone to scrawl on the bathroom wall: ‘JACK GO HOME!’”

James Baldwin, who lived nearby at 81 Horatio Street, was a White Horse regular. So were Norman Mailer, Bob Dylan, Anaïs Nin and Frank McCourt.

In 1946, Ebony magazine reported that “Harlem’s most talked-about men and women … live on Sugar Hill.” Arguably the most famous building in the stylish neighborhood was 409 Edgecombe Avenue, which was known as “409.”

W.E.B. Du Bois lived at 409 for a time. So did Countee Cullen, James Weldon Johnson and Thurgood Marshall.

During the Harlem Renaissance, 409 was the site of legendary literary gatherings. “In those days,” Langston Hughes wrote in his memoir, “The Big Sea,” the building “was quite a party center.”

Hughes recalled that — because it was Prohibition — “everybody would chip in and go dutch on the refreshments, calling down to the nearest bootlegger for a bottle of whatever it was that was drunk in those days.”

The N.A.A.C.P.’s Walter Francis White and his wife, Gladys, hosted 409’s most legendary soirees. In “This Was Harlem,” their daughter remembered that “George Gershwin played ‘Rhapsody in Blue’ on our piano” and that Claude McKay, Harold Jackman and Countee Cullen, pictured, were frequent guests.

In the late 1920s, the rare book collector and scrapbook artist L. S. Alexander Gumby welcomed the artistic elite into his Harlem literary salon on Fifth Avenue between 131st and 132nd.

The salon came about, The Times noted in Gumby’s 1961 obituary, because “his apartment became so crowded with his collections that he had to lease another.”

In 1930, the novelist and poet Maxwell Bodenheim wrote in the studio’s guestbook, “When you mix black and white, the result is gray — the color of unassuming meditation.”

The Baltimore Afro-American newspaper described Gumby as a “tall figure lying back on the divan in an exotic dressing gown, nursing along the imagination of his guests till the air was full of philosophy, aesthetics and love.”

The novelist and poet Claude McKay, pictured, came to the Gumby Book Studio. So did Langston Hughes, Alain Locke, H. L. Mencken, Richard Bruce Nugent, Wallace Thurman and Countee Cullen, who was feted at one of Gumby’s most famous parties in 1930.

A list of New York literary hotspots would not be complete without the Algonquin, which played host in the 1920s to an assortment of New York writers, playwrights, journalists and actors.

Members of the Round Table, as the group was called, were famous for their lacerating wit. According to The Times,“The wattage of ribaldry and verbal dexterity around the table was enough to electrify all of Manhattan.”

The group dined regularly in the clubby, chandeliered splendor of its Rose Room restaurant.

Harold Ross, the editor of The New Yorker, was also part of the Round Table, which was dubbed “the vicious circle” because the verbal jousting was so intense. Ferber, however, had another name for her lunchmates: “the poison squad.”

A 2012 Times piece about this cozy West Village hangout opened with the line, “Sometimes you like a bar for the conversation, and not necessarily your own.” That was only one of the charms of the rakish, jaunty Café Loup, founded in 1977.

In its early years, it drew a low-key crowd of literary luminaries, including Fran Lebowitz, Gay Talese and Christopher Hitchens, who once described it as “my true bar.”

E.L. Doctorow was a regular. So were members of the National Book Critics Circle. It’s not clear if Zadie Smith was, but she paid tribute to Café Loup in her short story “Downtown,” calling it “a movable feast.”

The Nuyorican Poets Cafe, a nonprofit arts organization, began in the East Village living room of the poet Miguel Algarín in 1973.

“The gang of poets that he gathered around him were hanging out … when he said, ‘There are too many of us in here; let’s go over to that Irish bar,’” his friend Bob Holman told The Times when Algarín died.

Over the years, the Nuyorican has had several different incarnations and locations, but it has always drawn a diverse array of artists and spectators. In the 1990s, it became a slam poetry stronghold.

“Everywhere you turned, there was a model, an artist, an actor, a writer, a director, a gallery owner or someone who was just beautiful,” the novelist Jay McInerney told The Times.

Some scenes in McInerney’s cocaine-fueled 1984 novel “Bright Lights, Big City” played out at the Odeon. The restaurant’s iconic neon sign even appeared on the novel’s cover. Keith McNally, a co-owner, later told Vanity Fair that he didn’t charge the publisher to use the image: “I read a little bit, and I didn’t think much of it. I thought, This will never see the light of day.”

For a period of time, the always-dapper Tom Wolfe was a regular at the Odeon.

So were Diane von Furstenberg, John Belushi and Jean-Michel Basquiat.

For nearly 50 years, this Upper East Side bar and restaurant was known for its gregarious owner, Elaine Kaufman, and the rotating cast of writers and celebrities who filled its tables.

Candace Bushnell lived up to her “Sex and the City” image at Elaine’s in the late 1990s. (That’s the writer Gay Talese in the background.)

The writer and Paris Review editor George Plimpton, who lived nearby, showed up on many an evening.

So did Norman Mailer, seen here arriving at the restaurant with his wife Norris Church.

And Renata Adler, a regular, even set a scene in her fictional memoir “Speedboat” at the restaurant: “Elaine’s was jammed, full of young women looking tired and their escorts, ignoring them in droves, talking to each other, man to man …”

In 1966, thanks in large part to a dynamic pastor who wanted to combine community work with the arts, St. Mark’s Church in-the-Bowery founded the Poetry Project.

It was meant, the church said, to “challenge persistent social narrative … through the verbal reframing made possible in poetry.”

Allen Ginsberg, seen here reading to a crowd in Washington Square Park in 1966, was deeply involved in the Poetry Project in its earliest years.

So was the playwright Sam Shepard, who married the actress O-Lan Jones at St. Mark’s in 1969.