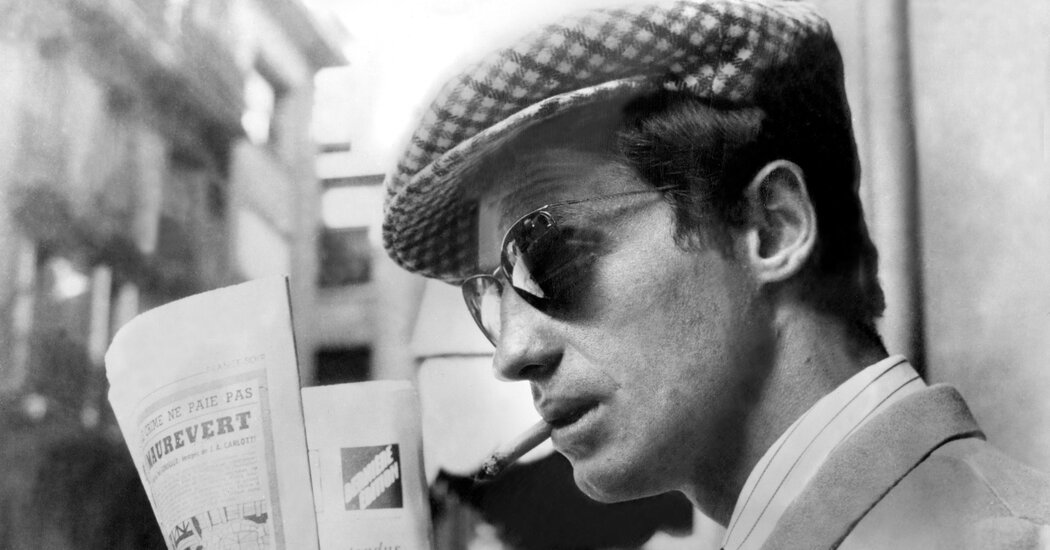 One word often comes up when reading about Jean-Paul Belmondo: cool. The French actor, who died on Monday at 88, never appeared to try hard, bringing a nonchalant effortlessness to all his roles. Belmondo did not look like a typical leading man — The New York Times described him as “hypnotically ugly” in 1961 — but he had charm and the unbothered casualness that the French call “désinvolture.”

This son of artists had a taste for boxing, and swiftly eschewed being pigeonholed — he appeared in a high-minded literary adaptation one minute, performed his own stunts in a feisty caper the next. Through the 1960s and early ’70s, he alternated between art-house fare and quality commercial productions, then focused squarely on the latter, which might explain his often adversarial relationship with the French cinema establishment. When his performance in Claude Lelouch’s “Itinerary of a Spoiled Child” earned him a nomination for best actor at the 1989 César Awards, for example, he encouraged voters not to pick him; he won anyway and did not attend the ceremony.

Luckily, a representative sample of Belmondo’s films is available for streaming. Here are 10 of them, in chronological order.

This film, released in the United States in 1961, launched the careers of Belmondo and the director Jean-Luc Godard, and remains a formally thrilling pop-noir touchstone of the French new wave. Belmondo had a lower profile than his co-star, Jean Seberg, but his punk charisma burns the screen. A cigarette permanently dangling from his lips, he ambles along with the insolence of youth, his insouciant yet focused energy matching the jazzy, finger-snapping soundtrack. Many actors would have faded next to the vibrant modernity of Godard’s filmmaking; Belmondo fed on it.

Stream it on Plex TV; rent or buy it on iTunes.

For many years, Belmondo’s rival as France’s sexy male lead was Alain Delon, whose tightly wound composure was a perfect fit for the director Jean-Pierre Melville’s cerebral, stylish movies. Yet Belmondo’s collaboration with the master filmmaker was just as fruitful. “Le Doulos,” from 1962, is Melville’s first great noir, and Belmondo is all contained brutality in it. A slightly raised eyebrow, the quirk of a mouth almost make you want to sympathize with his Silien, but menace is always there, the sense that this guy could shoot you at any time.

One of Belmondo’s frequent collaborators was Philippe de Broca, the director of fleet-footed, witty films. In this 1964 hit, his character travels all the way to Brazil to save his abducted girlfriend. The combination of comedy, adventure and romance is a perfect fit for Belmondo, and the wonderfully piquant Françoise Dorléac was among his best screen partners — their spiky screen chemistry is wonderful to behold.

You can make it a double bill with de Broca’s zany Hong Kong-set “Up to His Ears,” from 1965, in which the actor plays a suicidal millionaire who decides life is worth living when mysterious henchmen try to kill him. Ursula Andress, with whom Belmondo then began a relationship, plays a fetching ethnologist earning spare change as an exotic dancer. Ah, the 1960s. …

In 1965, Godard gave Belmondo another superb role as an out-of-sorts man who escapes from his hohum life with Anna Karina (who wouldn’t?). This is one of Belmondo’s finest performances because he allows a poignant vulnerability to show, instead of hiding it behind a cocksure confidence. In a lovely scene, he and Karina speak-sing while dance-walking, and the craggy-faced young man with the squashed nose is pure poetry.

Stream it on Amazon.

As the trailer to this 1969 film put it, “suddenly you realize two things: You’re in love, and you’re in danger.” Belmondo was cast against type as a man obsessed with — and manipulated by — a scheming Catherine Deneuve in François Truffaut’s adaptation of a William Irish novel. Alas the movie tanked, maybe because audiences were not ready to see Belmondo so blinded by passion that he came across as passive. “Mississippi Mermaid” was more subtle than that, though, and is worth rediscovering.

Rent or buy it on Amazon and iTunes.

Belmondo and Delon: the yin and yang of French cinema, muscular warmth versus icy distance. The pair had already appeared in “Is Paris Burning?” in 1966, but they were just two in a whole bunch of international marquee names. Four years later, they headlined a 1930s-set story as two Marseille gangsters who forge an alliance till death do them part. (Real life was more complicated, as Belmondo took Delon to court over who would be listed first in the credits.) Helmed by the genre craftsman Jacques Deray (“La Piscine”), “Borsalino” endures thanks to its ridiculously charismatic leads, with Belmondo as the very definition of raffish.

Confusingly, this 1971 de Broca movie has different English titles, including the clunky literal translation “The Married Couple of the Year Two” and the fairly descriptive “The Scoundrel” and “Swashbuckler” — guess who that describes? No matter: This is a sterling example of a certain kind of period, well-made entertainment that has long been popular in France. The film is a high-spirited screwball comedy of marriage set during the French Revolution, in which Belmondo and Marlène Jobert (Eva Green’s mother) prove their love by constantly bickering. Both are marvelously at ease in that register, and Belmondo gets to indulge in stunt work, too.

Stream it on Kanopy.

On the surface, Belmondo plays to type — albeit a rich criminal rather than a lowlife — in this 1974 film based on the true story of Alexandre Stavisky, a shady financier and swindler who became the linchpin of a huge scandal that rocked France in 1934. But the role and the performance are not cookie-cutter period biopic, because this is from the cerebral director Alain Resnais. “Stavisky …” emphasized mood over action (a fantastic score by Stephen Sondheim helped) and toyed with chronology, but its idiosyncratic approach to genre did not sell. Belmondo proceeded to turn his back on artier fare and unabashedly dedicated himself to selling the most tickets possible.

In the late 1970s and the mid ’80s, Belmondo ruled the French box office with a string of action movies. Some of them had a comic bent, others were tough-guy noirs. This Georges Lautner smash from 1981 squarely belongs to the second type, with our star playing a leather-jacketed secret agent embroiled in a plot involving French interests in Africa. The best part of the movie is the face-off between Belmondo and his foil, terrifically portrayed by Robert Hossein (the two often worked together at the theater, with Hossein directing). Bonus: One of Ennio Morricone’s best scores of the 1980s.

Belmondo and Delon joined forces again for this 1998 comic thriller in which Vanessa Paradis tries to find out which of them is her father. (Sound familiar?) The director Patrice Leconte (“Monsieur Hire”) enjoys playing with his aging male stars’ images: Belmondo gets to climb from a moving convertible to a helicopter, for example. His face an epic landscape of creases and furrows, he is simply irresistible as an extroverted, rambunctious fast-talker, and makes a meal out of the most innocuous scraps of dialogue.