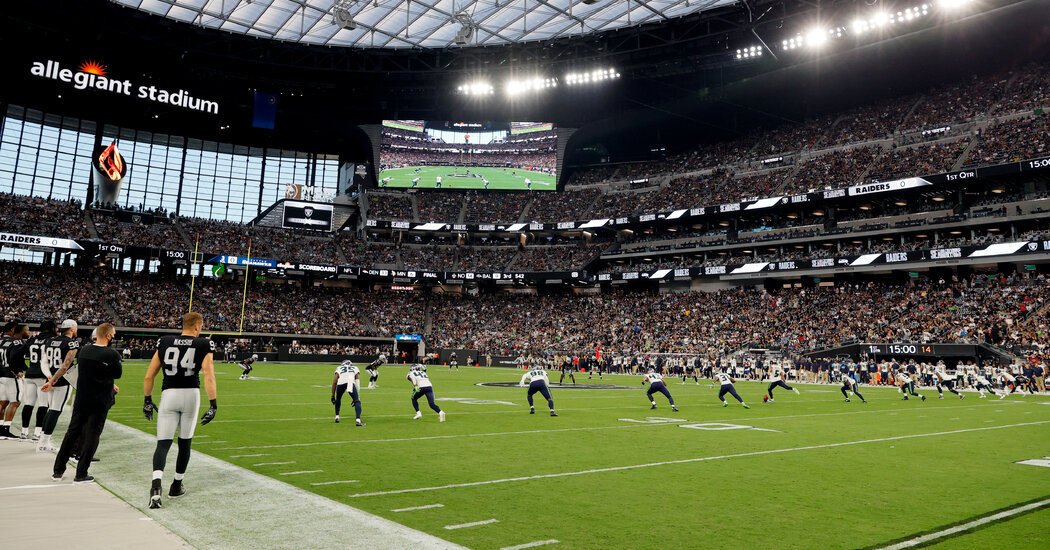 Between network, cable and streaming, the modern television landscape is a vast one. Here are some of the shows, specials and movies coming to TV this week, Sept. 13-19. Details and times are subject to change.

MONDAY NIGHT FOOTBALL 8:15 p.m. on ESPN. Monday Night Football returns with a game between the Baltimore Ravens and the Las Vegas Raiders. Though the N.F.L.’s 18-week season officially began last Thursday, the Monday night games begin this week. The tradition of broadcasting Monday Night Football began in 1970, making it one of the longest running prime-time programs in television history.

THE DAILY SHOW WITH TREVOR NOAH 11 p.m. on Comedy Central. Trevor Noah will be back on Monday with “The Daily Show,” following a hiatus that began in June. Since the start of the pandemic, Noah has been calling his show “The Daily Social Distancing Show,” with production and filming taking place at his home. Though Comedy Central released a trailer dubbing this “the new era of ‘The Daily Show,’” it is unclear whether the rest of this season, the show’s 26th, will be filmed at the well-known “Daily Show” set with a live audience or back at Noah’s apartment.

EXTINCTION: THE FACTS 9 p.m. on PBS (check local listings). In the last of this four-part series, David Attenborough explores the millions of species at risk of extinction. Studies have found that humans are speeding up extinction, and we are currently in a phase of mass extinction. In the series, Attenborough explains how those extinctions and changes in biodiversity could effect humans through threats to food and water security, increased risk of climate change and a greater risk of more pandemics.

THE PAPER CHASE (1973) 8 p.m. on TCM. This film, directed by James Bridges and starring Timothy Bottoms, follows a first-year student at Harvard Law as he navigates his schoolwork and a new relationship. Vincent Canby, the New York Times critic, wrote that “there are some funny, intelligent sequences along the way, but by the end it has melted into a blob of clichés.”

FUTURE OF WORK 10 p.m. on PBS (check local listings). PBS wraps up its “Future of Work” series this Wednesday. It has explored the changing norms in workplaces and the long-term impact we see in educators, workers and communities. Amid the pandemic, a lot of businesses have shut down, implemented “work from home” policies or laid off employees entirely.

FLORIBAMA SHORE 8 p.m. on MTV. The fifth season of “Floribama Shore” is premiering on Thursday night. The show, which debuted in 2017, is an MTV production inspired by the notorious and wildly successful “Jersey Shore.” This show follows the lives of seven young adults from the Florida Panhandle and beyond. With roughly the same format as “Jersey Shore,” the cast members share a “shore house” and don’t have access to cellphones or social media. Season 5 will take place on a farm in Georgia.

BROOKLYN NINE-NINE 8 p.m. on NBC. “Brooklyn Nine-Nine” is wrapping up its eight-year run with a one-hour series finale on Thursday. The episode’s title — “The Last Day” — could be a hint to fans that Andy Samberg’s character, Jake Peralta, is leaving the N.Y.P.D. What it means to be a police officer in 2021 has been a main focus of this final season. The writers worked in plotlines around real-life events that followed the murder of George Floyd.

THA GOD’S HONEST TRUTH WITH LENARD ‘CHARLAMAGNE’ MCKELVEY 10 p.m. on Comedy Central. Lenard McKelvey, better known as Charlamagne Tha God, is hosting his first Comedy Central show. The program, which is executive produced by Stephen Colbert, will examine social issues through sketches, discussions and interpersonal experiments. McKelvey grew to notoriety on his New York-based radio show “The Breakfast Club,” which has since been inducted into the Radio Hall of Fame. He has also released two books: “Black Privilege: Opportunity Comes to Those Who Create It” and “Shook One: Anxiety Playing Tricks on Me.” The show will give viewers a new way to dive deep into McKelvey’s point of view.

THE HARDER THEY FALL (1956) 6 p.m. on TCM. Humphrey Bogart stars in this movie as a former sportswriter who is hired by a shady fight promoter to boost a rising boxing star from Argentina. The film, which was based off a book of the same name, offers plenty of behind-the-scenes boxing-match drama. The New York Times critic Bosley Crowther wrote, “With a fury and speed that keeps one dizzy for a matter of 10 rounds (or reels) — which, in screen time, is over 100 minutes — it bangs out a punishing tale.”

E! LIVE FROM THE RED CARPET — THE 2021 PRIMETIME EMMY AWARDS 6 p.m. on E!. Before an awards show, celebrities in designer clothing are usually featured together, but this year is a little different. Stars will be allowed to walk the red carpet (unlike last year’s show, which was virtual) in limited numbers. And only about a dozen members of the press will be allowed on the carpet. Hopefully, even with the limited press, audiences will get a glimpse of this year’s TV stars all decked out.

73RD EMMY AWARDS 8 p.m. on CBS. Though this year’s Emmy Awards ceremony will be small, just nominees and their guests are allowed inside, and the mask mandate in Los Angeles will likely still be in effect, it is still a step toward normalcy after last year’s virtual ceremony. The show will take place at L.A. Live in downtown Los Angeles and will be hosted by Cedric the Entertainer. This year, “Ted Lasso” is poised to be one of the night’s biggest stars, with 20 nominations — breaking the freshman comedy series record of 19 nominations that was held by “Glee.” In an already momentous moment, the “Pose” actress Mj Rodriguez became the first transgender person to be nominated in a lead acting category.