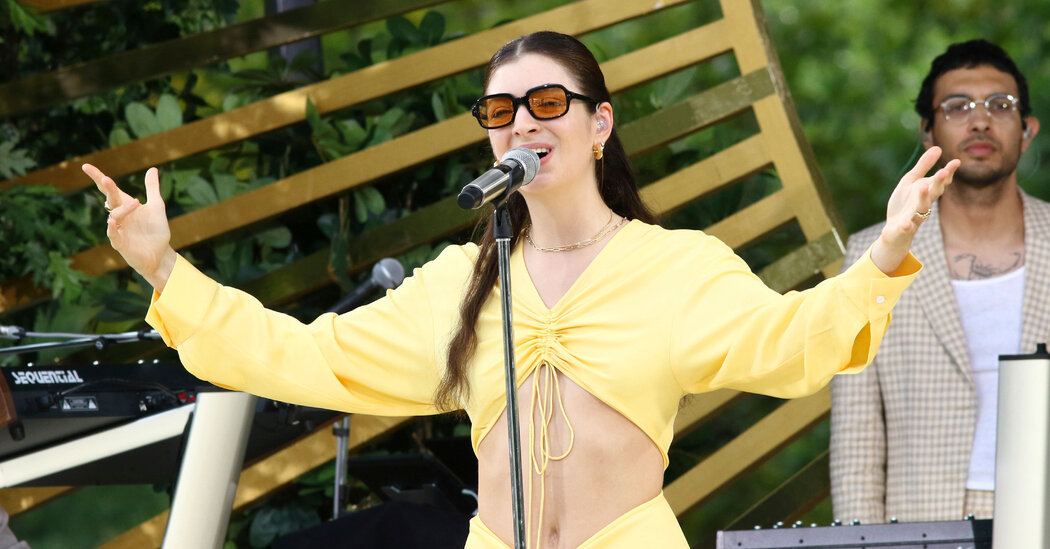 Between network, cable and streaming, the modern television landscape is a vast one. Here are some of the shows, specials and movies coming to TV this week, Aug. 23-29. Details and times are subject to change.

THE LATE LATE SHOW WITH JAMES CORDEN 12:37 a.m. (Tuesday morning) on CBS. The musician Lorde released a new album, “Solar Power,” Aug. 20. This week, she’ll have a four-night residency on James Corden’s late-night show. Monday night’s broadcast will pair her with the actor Jason Momoa, who will appear as a guest to promote a new Netflix action movie, “Sweet Girl,” which also came out last week.

THE HOBBIT: THE DESOLATION OF SMAUG (2013) 5 p.m. on AMC. In November, Disney is slated to debut Peter Jackson’s latest project, “The Beatles: Get Back,” a documentary about the making of the Beatles’s final album. The project was originally intended to be a feature-length movie that would have been released in theaters, but it was recently announced that the film would be expanded into a three-part TV series. That Jackson decided to go long is no surprise: The combined running time of his “Lord of the Rings” trilogy of the early 2000s was over 9 hours, and his follow-up trilogy, “The Hobbit,” clocked in at just under 8 hours. If you’re looking to pass some (or more than some) time on Monday, AMC is showing the whole “Hobbit” trilogy in order, beginning with “The Hobbit: An Unexpected Journey” (2012) at 1 p.m. and ending with “The Hobbit: The Battle of the Five Armies” (2014) at 8:45 p.m. All three movies follow Bilbo Baggins (Martin Freeman), the hero of J.R.R. Tolkien’s 1937 children’s novel of the same name, whose adventures here reach a level of maximalism that rivals that of a child’s imagination.

FIRST REFORMED (2018) 4:15 p.m. on Showtime 2. The screenwriter and director Paul Schrader is set to return to theaters next month with his newest movie, “The Card Counter,” a drama about a troubled gambler. Schrader was last in theaters in 2018, when he released “First Reformed,” a drama about a troubled Protestant minister. That pastor is Rev. Ernst Toller, played by Ethan Hawke, who oversees a small church in upstate New York. His story intersects with that of a young woman named Mary (Amanda Seyfried). The movie touches on issues of faith, money and climate disaster, and is, A.O. Scott wrote in his review for The New York Times, “an epiphany.”

AMERICAN HORROR STORY: DOUBLE FEATURE 10 p.m. on FX. This long running horror anthology series from the “Glee” creators Ryan Murphy and Brad Falchuk had a year off in 2020 because of the pandemic, but it will make up for that this year with its new season, “Double Feature,” which will tell two parallel stories. One is about a family that goes on a winter retreat by the sea; the other shows horrific events in drier environs.

CMT GIANTS: CHARLEY PRIDE 9 p.m. on CMT. The singer Charley Pride, who broke ground as country music’s first Black superstar, died from complications of Covid-19 in December. He was 86. This 90-minute special will honor Pride’s career and the impact that he had on country music. It brings together performances from other country stars — including Darius Rucker and Reba McEntire — and archival interviews with Pride himself.

FRENCH EXIT (2020) 9 p.m. on Starz. Michelle Pfeiffer plays an over-the-top New York socialite who was recently widowed in this comedy-drama, adapted from Patrick deWitt’s 2018 novel of the same name. After learning that her once-considerable bank account has dried up, Pfeiffer’s character, Frances, moves to Paris to live at a friend’s cramped apartment with her son, Malcolm (Lucas Hedges). The movie is “hampered by clockwork quirkiness and disaffected dialogue,” Jeannette Catsoulis wrote in her review for The Times. But, she added, “Pfeiffer is flat-out fabulous here, at once chilly and poignant.”

ALL THE WAY (2016) 4:35 p.m. on HBO. Bryan Cranston won a Tony Award for his performance as President Lyndon B. Johnson in the stage version of the Robert Schenkkan play “All the Way.” This television adaptation, which also includes performances from Bradley Whitford, Anthony Mackie and Frank Langella, hews to the play; it, too, follows Johnson’s first year in office. In his review for The Times, Neil Genzlinger wrote that, while “nothing beats witnessing this kind of larger-than-life portrayal onstage,” Cranston’s performance in the TV adaptation is still powerful. “In his hands,” Genzlinger wrote, “this accidental president comes across as an amazing bundle of contradictions, someone who seems at once too vulgar for the job and just right for it.”

THE DIRTY DOZEN (1967) 5:15 p.m. on TCM. When this Robert Aldrich war movie debuted in 1967, The Times’s Bosley Crowther called it a “studied indulgence of sadism that is morbid and disgusting beyond words.” Nevertheless — or, perhaps, accordingly — it was a hit at the box office. The story, based on the novel of the same name by E.M. Nathanson, follows a group of criminals who are given an extraordinarily dangerous mission during World War II, and are promised pardons if they succeed. The ensemble cast includes Charles Bronson, Lee Marvin, Ernest Borgnine and Donald Sutherland.

9/11: ONE DAY IN AMERICA 9 P.M. on National Geographic. Leading up to the 20th anniversary of the Sept. 11 terrorist attacks, this six-part, seven-hour documentary series revisits the events of that day and their immediate aftermath. It includes interviews with firefighters, emergency medical workers and others who experienced the wreckage firsthand.