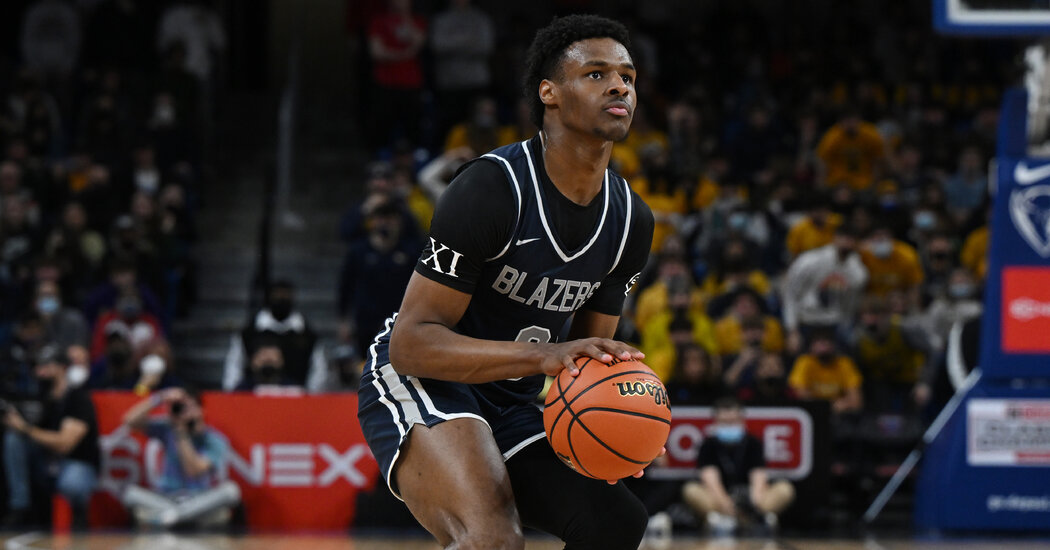 NORTH AUGUSTA, S.C. — As LeBron James sat on a folding chair in the corner of a recreation-center basketball court last week, he often appeared to be in a state of agita.

There was James, edging onto the court repeatedly to check the scoreboard and the clock above him. Or chomping on an apple and digging into a gallon-size bag of nuts. Or pleading “Come on, ref,” when a call was not to his liking.

He stood to whisper instructions to his son, who nodded sharply when he was passing the ball inbounds along the baseline. James stepped onto the court at halftime — first to give advice to the coach of the travel ball team he sponsors, Strive for Greatness, and then to get up some shots left-handed, which prompted many in the packed bleachers to whip out their cellphones to record the exercise.

For several days at Peach Jam, Nike’s annual summer recruiting showcase, James was just another basketball dad (albeit one with a security detail). He was there watching his eldest son, LeBron James Jr., who goes by Bronny and is figuring out where his basketball future lies, just like any other high school player entering his senior season (even ones with 6.3 million Instagram followers and a world-famous basketball superstar father).

Bronny, a 6-foot-2 guard, is largely characterized as having a keen basketball I.Q. but lacking elite athleticism and a polished shot — an asset to almost any team but most likely a role player.

Whatever Bronny ends up doing a year from now — attending college, playing in a development league or taking an unconventional route — it is unlikely to alter the trajectory of the championship ambitions of, say, Gonzaga or North Carolina, or turbo charge the growth of the G League, the development league run by the N.B.A., or Overtime Elite, a nascent development league that pays high school and college-age players.

Still, his next move is certain to generate interest far beyond the hyperkinetic fish bowl of college basketball recruiting. James, 37, told The Athletic just before the N.B.A. All-Star Game in February that his last season would be spent playing alongside his son. “Wherever Bronny is at, that’s where I’ll be,” he said, reprising a scenario from his childhood in which Ken Griffey and his son Ken Griffey Jr. played together for the Seattle Mariners. “I would do whatever it takes to play with my son for one year. It’s not about the money at that point.”

(Bronny turns 18 in October and won’t be eligible for the N.B.A. draft until 2024 under current rules, which require that players be at least 19 years old and a year removed from graduating high school.)

James, whose contract with the Lakers expires next June just as Bronny is set to graduate from Sierra Canyon School, a private school in Chatsworth, Calif., declined to discuss Bronny’s plans or what the experience of preparing him for the next step of his basketball life is like for him and his wife, Savannah, who last week often sat beside him with their 7-year-old daughter, Zhuri. (The Jameses’ younger son, Bryce, 15, also plays at Sierra Canyon.)

There will be time to talk about Bronny’s future later, James said.

This is true. While many of Bronny’s contemporaries will make campus visits, announce college commitments or reach agreements with development leagues in the coming weeks, Bronny has more immediate plans. He will leave Aug. 7 with a high school all-star team to play exhibitions in London, Paris and Rome that will be broadcast on ESPN.

Still, when he does start to finalize his next step this fall, more than two dozen college and travel-ball coaches, N.B.A. scouts, television-network officials and teenagers who have played with and against Bronny expect his recruitment — if not quite The Decision Jr. — to be far from the norm.

“I don’t think I’ll be on the phone all the time with the mom and the dad like I usually am,” said one head coach at a school with an interest in Bronny. This person, like others, spoke on the condition of anonymity because coaches are prohibited by N.C.A.A. rules from commenting publicly on recruitable athletes.

Ed Estevan, the Strive for Greatness coach and an assistant at Sierra Canyon, expects Bronny to take recruiting visits this fall.

“I understand he doesn’t have a normal life, but he’s just a regular, normal kid,” said Estevan, noting that it is rare for Bronny to enter a restaurant or walk through an airport without gawkers. “He wants to experience all the other things that all other kids get to experience.”

College coaches, he added, had not put much effort into recruiting Bronny until recently because they were skeptical that he would attend college. “Now, a lot of college coaches know that he has interest in college and that’s somewhere he will probably see himself going, so the phone is going off like crazy,” Estevan said.

A few things seem certain: If Bronny attends college, it will be at a school sponsored by Nike, which has invested heavily in his father since James entered the N.B.A. as a generational phenom in 2003. And ESPN, which has been a frequent collaborator with James, will be an eager partner. James’s longtime advisers, Rich Paul and Maverick Carter, will be conduits for anyone interested in recruiting Bronny. “I’ve got to listen to dad, Rich or Maverick,” said an assistant at a school that has expressed interest in recruiting him.

Finding the right place for Bronny may not be as simple as picking a blue blood. Kentucky and Duke, for example, have already received commitments from 5-star point guards, his most likely future position. U.C.L.A. is targeting an elite point guard, Isaiah Collier of Marietta, Ga., and will also have a stacked depth chart. (U.C.L.A. and his other hometown school, Southern California, had not shown any interest as of last week.)

If Bronny is not playing a prominent role, what coach would want the headache of explaining why — to fans, media and James and his camp?

“You become a normal person as a parent — you’re just looking for the best scenario for your child,” said Memphis Coach Penny Hardaway, himself a former N.B.A. star whose son Ashton, 18, is mulling whether to play at Memphis or elsewhere. “As a parent, you want to make sure they’re being supported wherever they go.”

Hardaway, who watched Bronny play at least twice last week and chatted briefly with James, has leveraged his N.B.A. connections with Mike Miller, Rasheed Wallace and Larry Brown on his staff in recent years. (Brown is weighing whether to return; the others have left.) Hardaway’s record, though, is mixed. Emoni Bates, among the nation’s top recruits last season, flopped at Memphis and has since transferred to Eastern Michigan.

Michigan Coach Juwan Howard, whose son Jett will be a freshman this season, played three seasons alongside James with the Miami Heat and spent another season with him as an assistant coach. The Wolverines are also interested, though it would be something if James — a lifelong Ohio State fan — sent his son to the Buckeyes’ rival.

Still, Bronny could end up in Columbus. Ohio State, which is where James would have most likely played if he had gone to college, has let James know it is interested in recruiting his son, and Coach Chris Holtmann and his assistant Jake Diebler watched Bronny play at Peach Jam.

The limits of familial connections, though, would be tested if Keith Dambrot, James’s high school coach in Akron, makes a call. He is the coach at Duquesne.

One school making an unexpected push to recruit James is Rutgers, a basketball striver. As far-fetched as it might seem, Rutgers is hoping Coach Steve Pikiell’s strong record of development — turning lightly regarded recruits such as Geo Baker, Ron Harper Jr. and Myles Johnson into decorated Big Ten players — carries some appeal to James.

As amusing as Bronny in Piscataway might be, Peach Jam has provided a window into what it might look like. Since he first played in the tournament before starting high school, crowds waiting to see Bronny play have packed the hallways outside each court an hour before tipoff — even if high-major coaches were at other courts watching more highly regarded prospects. This year, Ramel Drake, 32, came from Graniteville, S.C., with his son, Mark, 5, thankful that they could wedge into the packed bleachers. (Mark pointed out Bronny, who was wearing No. 6.)

At this particular game, Carmelo Anthony and Chris Paul sat beside James in the corner of the gym, which he entered through a side door from the parking lot.

“Oh, man, the environment was crazy,” said Josh Hubbard, a guard from Madison, Miss., who with his father posed for a photo with James and his son after they played. “There was people outside the doors, people at the game before waiting just to see our game.”

At this year’s in-person evaluation season, which just ended this week, college coaches saw a different side of Bronny, who has often played a supporting role on his high school and travel-ball teams. Over the last few months, the Strive for Greatness roster perpetually churned, the team rarely won and Bronny was left to carry his team — a role that is familiar in the household.

“He’s solid as hell,” said Thaddeus Young, who just finished his 15th N.B.A. season and sponsored a team that played Strive for Greatness, an assessment that was largely echoed by college coaches and N.B.A. scouts. “Obviously, probably not the elite of the elite. But he’s athletic, he’s strong, he plays defense, he can shoot the ball well, he can run the point guard position, he can play off ball.”

“I love his game,” Young added.

Before too long, a wider audience will get to judge for itself.