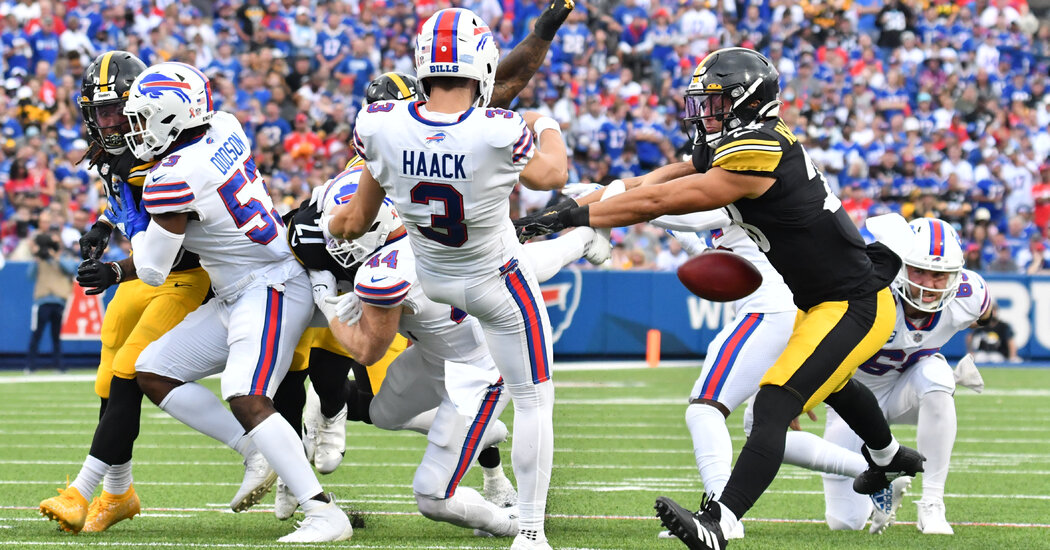 [What We Learned is returning for the 2021 N.F.L. season with a new writer and a new look.]

How dare any of us doubt a team coached by Mike Tomlin?

There are only a few guarantees in today’s N.F.L.: Tom Brady will eat his avocado ice cream and win Super Bowls. Jerry Jones will do something absurd to extend Dallas’s championship drought. And Tomlin will keep his Pittsburgh Steelers in Super Bowl contention.

These Steelers hardly generated a decibel of buzz heading into Week 1. Heck, it was a shock Pittsburgh even wanted to bring back the 39-year-old Ben Roethlisberger at quarterback.

The Buffalo Bills were the team primed to take the next step. Josh Allen was the must-have quarterback. And all Tomlin’s Steelers did was travel 200 miles north, strut into Highmark Stadium and remind the entire N.F.L., with one punishing 23-16 triumph, that they’re not going anywhere.

Which is, of course, what Tomlin’s teams have done for 14 seasons.

That’s what happened on one ridiculous play call by the Bills at the start of the fourth quarter.

Facing a fourth-and-1 from Pittsburgh’s 41-yard line — and with a 10-6 lead at the start of the fourth quarter — the Bills wisely went for it. After all, this is the Buffalo team that stuck its own head in the guillotine a year ago by opting for field goals against the Patrick Mahomes-powered Kansas City Chiefs in January’s A.F.C. championship game. A little guts in the play-calling is a welcome change.

What came next was beyond bizarre.

Allen turned around to flick a pass backward to Matt Breida, and cornerback Cameron Sutton was right there to lasso the running back to the ground for a 7-yard loss.

Roethlisberger feathered a 5-yard score to Diontae Johnson in the back of the end zone. Johnson, who led the league in drops a year ago, displayed remarkable concentration locking the ball in while dragging his back foot.

On the next drive, cornerback James Pierre — the latest homegrown, undrafted future star in Pittsburgh — punched out what would have been a long completion to Emmanuel Sanders.

Two plays later, the Steelers blocked a punt for a touchdown to go up, 20-10.

And after a Bills field goal put the pressure on Old Man Ben to finish this off, Roethlisberger did exactly that. A pair of vintage, slow-motion throws to JuJu Smith-Schuster (24 yards) and Chase Claypool (14 yards) teed up a game-clinching field goal.

The Pittsburgh defense, say it with me now, looks elite. Up front, everyone took turns smacking around the 6-foot-5, 237-pound Allen, effectively turning him into the 2018 rookie version — overthrowing receivers, skidding passes into the dirt, fumbling and looking downright skittish for three hours straight.

T.J. Watt is worth every penny. There are game-wreckers everywhere on this defense, starting with the man who signed a four-year, $112 million extension this past week. Watt accounted for five of the team’s eight QB hits.

It’s clear the Steelers want to get rookie running back Najee Harris rolling in 2021, keep games close and let Roethlisberger win it in the fourth. He’s old. He’s immobile. He’s easily meme-able. But he has also thrived in every possible situation.

We won’t see Roethlisberger chucking it 60 times in another playoff loss this season — these Steelers can dictate the tempo.

And for all of the “Last Dance” talk in Green Bay, the Steelers are also capable of sending their quarterback out on top this season.

Long before Aaron Rodgers hijacked the headlines for four months, there was another unhappy quarterback in this league: Russell Wilson and the Seattle Seahawks nearly divorced after nine seasons. It was close, too. Much closer than anyone realizes. The Chicago Bears thought it was a done deal.

Instead, both Wilson and the Seahawks realized they were at their best together and everyone’s hope was that new offensive coordinator Shane Waldron would essentially bring all parties together to sing a little “Kumbaya” around the campfire.

Did they ever in Week 1.

Facing one of the N.F.L.’s best defenses, on the road, Wilson was sublime in leading Seattle to a 28-16 win over Indianapolis. The eight-time Pro Bowler finished with 18 of 23 completions for 254 yards with four touchdowns, no picks and a 152.3 passer rating. Wilson’s 69-yard moon ball touchdown pass to Tyler Lockett was a thing of beauty, too, traveling 60 yards in the air.

Granted, we were teased like this in 2020. Wilson was lights out for a good two months. Then, the entire offense went defunct and Seattle nearly pulled the plug on an era. Here’s thinking this Wilson and this offense are both here to stay.

At least for the rest of this season.