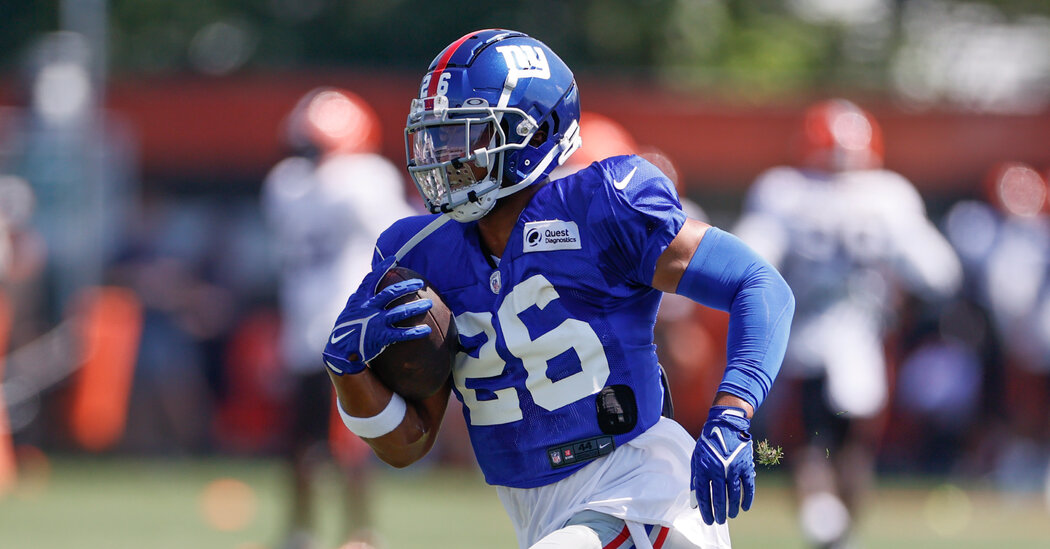 Whether a product of the pandemic, collateral damage from an eliminated preseason or just the way things go in football, the 2020 N.F.L. season was marred by significant injuries and postponements.

As different as the league may look this season, football fans will find a more familiar N.F.L. this season, replete with fans in the stands. Here are some story lines to pay attention to during Week 1’s matchups.

Reaching Week 1 is a milestone in and of itself, considering the Covid protocols and vaccination push it took to get here. But Kansas City tight end Travis Kelce is on milestone watch already, heading into Sunday’s regular-season opener against Cleveland. Coming off a season in which he ranked second among all N.F.L. pass catchers with 1,416 yards receiving (a record for a tight end), Kelce, who has 7,881 career receiving yards, can become the fastest tight end in league history to reach 8,000. He needs 119 yards against the Browns to claim the record, currently held by Tampa Bay’s Rob Gronkowski.

Aaron Rodgers’s potential final season as a Packer begins against the Jameis Winston-led Saints. Rodgers, the reigning league most valuable player, needs to gain 231 yards passing against a Saints defense that was top-five against the pass last season to surpass Hall of Famer John Elway for the 10th-most passing yards in N.F.L. history.

Throwing to one of the league’s top receiving threats in Davante Adams is as much a safety net as Rodgers could ask for, but Rodgers will also have one of his favorite targets in Randall Cobb, the veteran receiver the Packers brought back to the team this off-season at Rodgers’s request.

Whose A.C.L. healed the best?

We didn’t see much of Browns receiver Odell Beckham Jr. on the field last year (he tore the anterior cruciate ligament in his left knee last October), so Cleveland’s offense leaned instead on the punch that Nick Chubb and Kareem Hunt gave their rushing attack. It helped, too, that quarterback Baker Mayfield had the most efficient of his first three seasons, posting a career-best 95.9 passer rating.

Sunday’s rematch of January’s divisional-round playoff game, a 22-17 Kansas City win, gives Beckham the perfect stage to show he’s still the same electric receiver he once was and — if he and Mayfield can re-establish their chemistry — that the Browns’ 2020 breakthrough wasn’t an anomaly.

In San Francisco, losing defensive end Nick Bosa to an A.C.L. injury in Week 2 plunged the 49ers out of serious contention almost immediately. He’s back and ready to pounce on the Lions.

The Panthers’ do-everything running back Christian McCaffrey and Giants running back Saquon Barkley also return this weekend, but how much they’ll contribute in their debuts remains to be seen. Barkley appeared in two games last season before tearing his right A.C.L. and skipped the preseason, but is fully ready, Giants offensive coordinator Jason Garrett said. The Giants will likely not ask too much of him Sunday against the Broncos because he’s pacing to be a focal point in an offense that was plagued by receivers’ dropped passes and turnovers by quarterback Daniel Jones, who’ll be chased by Denver’s Von Miller, returning from a season-ending ankle injury.

McCaffrey was sidelined for all but three full games in 2020 with several injuries, but plays a huge role in the Panthers’ passing game, which may not need much of a lift against the Jets. Sam Darnold already has a more solid receiving duo in Carolina, in Robby Anderson and D.J. Moore, than he may be used to.

Rookie standouts will try to make a second-year leap.

If Los Angeles quarterback Justin Herbert plans to make a leap in Year 2, facing the Washington Football Team’s dominant defensive end Chase Young is probably one of the most difficult ways to start. Young, the 2020 defensive rookie of the year, will meet Herbert’s Chargers Sunday afternoon. It will be the second straight season where the reigning offensive and defensive rookies of the year will meet in their season opener: Cardinals quarterback Kyler Murray faced Bosa’s 49ers in Week 1 last season.

In 2020, Young anchored one of the league’s best defenses, which allowed just over 300 yards per game, second fewest in the N.F.L. Herbert finished the season with the most passing touchdowns (31) and completions (396) of any rookie in league history.