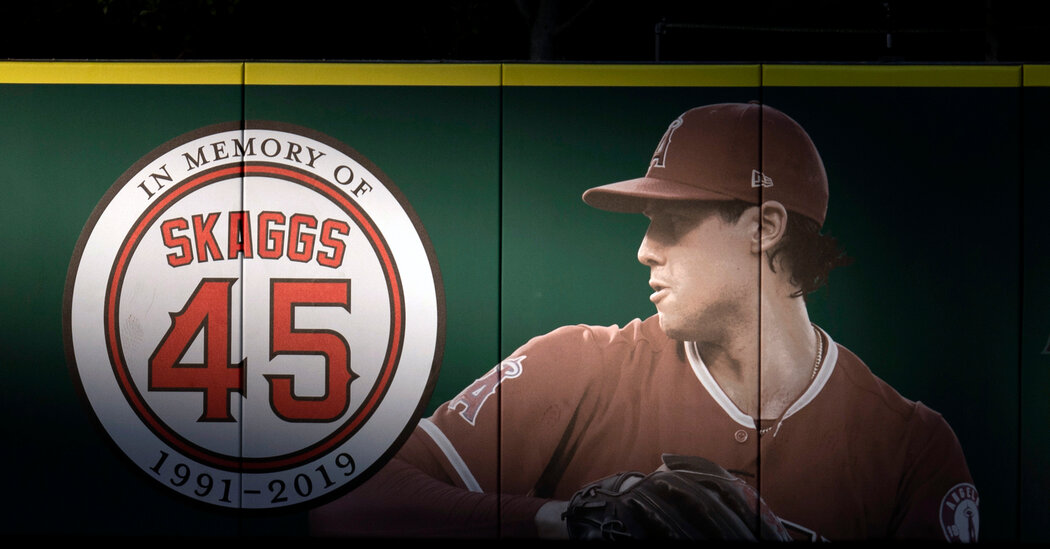 A dark cloud has hung over the Los Angeles Angels and Major League Baseball since pitcher Tyler Skaggs was found dead inside a team hotel in Texas on July 1, 2019. Skaggs was 27 at the time, had just gotten married the year before and some believed he was poised to take the next step in his career.

Skaggs’s death has been harrowing for the sport. For many, it was a painful reminder of the breadth of the national opioid epidemic and how baseball wasn’t exempt from it. As federal authorities investigated the circumstances surrounding Skaggs’s death, their inquiry centered on Eric Kay, 46, a former Angels executive — but by extension, it has also drawn in the Angels and the sport.

In October 2020, a grand jury indicted Kay with distributing a controlled substance that resulted in Skaggs’s death and for conspiracy to possess with the intent to distribute the opioid fentanyl. Kay has pleaded not guilty.

Ahead of a trial scheduled for October in the U.S. District Court for the Northern District of Texas, the documents filed in court have offered glimpses of what may lie ahead. In a recent filing, federal prosecutors detailed how they believed Kay obtained and distributed the drugs, and that five other players are expected to testify that they were also recipients of oxycodone from Kay.

Here’s what is going on:

What do we know?

Kay, a Southern California native, began working for the Angels in 1996 as an intern and by 2014 had become a director of communications, according to an Angels media guide. The Angels drafted Skaggs out of Santa Monica High in the first round in 2009, and he reached the big leagues with Arizona in 2012.

On June 30, 2019, the Angels flew to play the Texas Rangers and the next day, Skaggs was found dead in his hotel room in Southlake, Texas, just hours before their game. An autopsy by the Tarrant County Medical Examiner’s office found fentanyl, oxycodone and alcohol in Skaggs’s system.

The official cause of death was ruled an intoxication from the substances along with Skaggs choking on his own vomit. The death was listed as accidental. In a criminal complaint from July 2020, a Drug Enforcement Administration agent wrote without much explanation, “It was later determined that but for the fentanyl” in Skaggs’s system, he “would not have died.”

Fentanyl is a synthetic opioid that can be 30 to 50 times stronger than heroin and can be fatal even in low doses. Although it can be used medically, the vast majority of fentanyl is illegally produced and dealers frequently produce counterfeit pills using this cheaper drug but falsely market it as oxycodone, a prescription painkiller.

Both fentanyl and oxycodone were banned as part of M.L.B.’s joint drug prevention and treatment program. (In response to Skaggs’s death, M.L.B. and the players’ union have since updated the drug policy to take a treatment-based approach, rather than a punitive one, and to help players who test positive for substances classified as drugs of abuse, like opioids and fentanyl.)

In the July 2020 criminal complaint, investigators said they found several pills and white residue in Skaggs’s hotel room. An analysis, according to the document, later determined that both a single blue pill that closely resembled a 30-milligram oxycodone tablet and the white residue contained fentanyl. Five pink pills also found were determined to be legitimately manufactured five-milligram oxycodone pills that did not contain fentanyl.

Skaggs’s mother and his widow told the Los Angeles Times in 2020 that they were stunned to learn of the mention of drugs in the toxicology report.

How is Kay involved?

According to the July 2020 criminal complaint, law enforcement argued that Skaggs and Kay had a history of drug transactions, including at work; that Kay acquired pills for Skaggs “and others,” and that Kay had been in touch with his drug contacts in the days leading up to Skaggs’s death. The complaint cited location data from Kay’s cellphone and a search of Skaggs’s cellphone, including text messages showing Skaggs wanted something from Kay and invited Kay to his room the night before he was found dead.

In a 19-page document filed on Aug. 20, federal prosecutors outlined some of the evidence they planned to introduce at the trial, including testimony from “approximately five players who received oxycodone from Kay” from 2017 to 2019. The identities of the players were not revealed.

“Evidence will also demonstrate that Kay was motivated to obtain these pills because Kay could himself use some of the pills that he obtained for the players,” prosecutors wrote.

According to the prosecutors’ filing, Kay, under the username “Walt,” contacted people on the online marketplace OfferUp seeking pills (listed under the terms “M30,” “Roxy” or “Blue”) weeks and months before Skaggs’s death and asked about their legitimacy.

In March 2019, according to what prosecutors said were chat transcripts from the website, Kay responded to a posting for “Roxy shirts size m30 color blue” and asked, “10 for 240 cool?” He also asked at one point, “Pharm grade? No fet.”

In a June 2019 conversation with a user named “Danny” in response to a posting for “M30 shirt,” Kay asked, according to the filing: “Any chance u can get to Angel Stadium? Where I work. Could leave u tickets for the game if u wanted.” He added later, “I just can’t leave work tonight.”

Kay coordinated the distribution of oxycodone to Skaggs and the unnamed players, according to prosecutors, through text messages or conversations with Skaggs — “with some witnesses receiving just two to three pills while others would ask for up to 20 pills.”

Kay, the filing said, was taken home by a co-worker in April 2019 from Angel Stadium after behaving erratically, was later admitted to a hospital because of an overdose (“likely on oxycodone”) and entered a drug rehabilitation program. Kay’s mother told ESPN in October 2019 that her son started abusing opioids after his father died in 1998 and had sought treatment for substance abuse.

Prosecutors wrote that they found white residue on two items — a razor blade holder and a small metal cylinder — in Kay’s desk at Angel Stadium that had traces of various substances, including oxycodone and fentanyl.

Prosecutors wrote in the filing that they believe the evidence that will be presented in the upcoming trial will show that Kay obtained oxycodone pills — the ones they said he would give to Skaggs — while at Angel Stadium on June 30, 2019 before the team flew to Texas that day.

How are the Angels and M.L.B. involved?

An ESPN report in October 2019 cited unnamed people claiming that Kay told investigators that he didn’t think the pills he had obtained for Skaggs were the same ones he took the day he died, and that other Angels employees knew of Skaggs’s drug use. M.L.B. said at the time that it was conducting its own investigation of the allegations.

After hiring a former federal prosecutor to conduct an independent investigation, the Angels said that private inquiry “confirmed that no one in management was aware, or informed, of any employee providing opioids to any player, nor that Tyler was using opioids.”

The team’s statement, from August 2020, also said, “We learned that there was unacceptable behavior inconsistent with our code of conduct, and we took steps to address it.”

In a motion filed on Aug. 23, federal prosecutors accused the Angels of refusing to properly comply with their subpoena in the Kay case, saying the team too often cited attorney-client privilege. Prosectors said they were seeking records and information regarding drug distribution within the organization and asked the court to compel the Angels to do so.

The Angels have bristled at that characterization and accused federal authorities of rushing them to meet a subpoena request from late July.

“In short, Angels Baseball has always met and conferred in good faith, responded in accordance with agreed upon deadlines (and often well in advance of those deadlines), and produced what was requested,” wrote John H. Cayce, a lawyer for the Angels, in a response filed in court. “The only documents Angels Baseball has refused to produce are those protected by the attorney-client privilege and work product protections, including those relating to its internal investigation arising out of” Skaggs’s death.

(In their court filing, prosecutors said a lawyer for M.L.B. told them that the league wouldn’t talk about any discussions the commissioner’s office had with the Angels about Skaggs’s death unless compelled to do so in court.)

After several delays, Kay’s jury trial is slated to begin Oct. 4 in Fort Worth. If convicted on the current charges, Kay faces up to 20 years in federal prison.

Beyond federal authorities’ criminal case, there are civil lawsuits. In June, the Skaggs family sued Kay, the Angels and Kay’s past boss, former vice president of communications Tim Mead, in California and Texas. The family claimed that the Angels should have known Kay was dealing drugs to players, while the team called the allegations “baseless and irresponsible.”