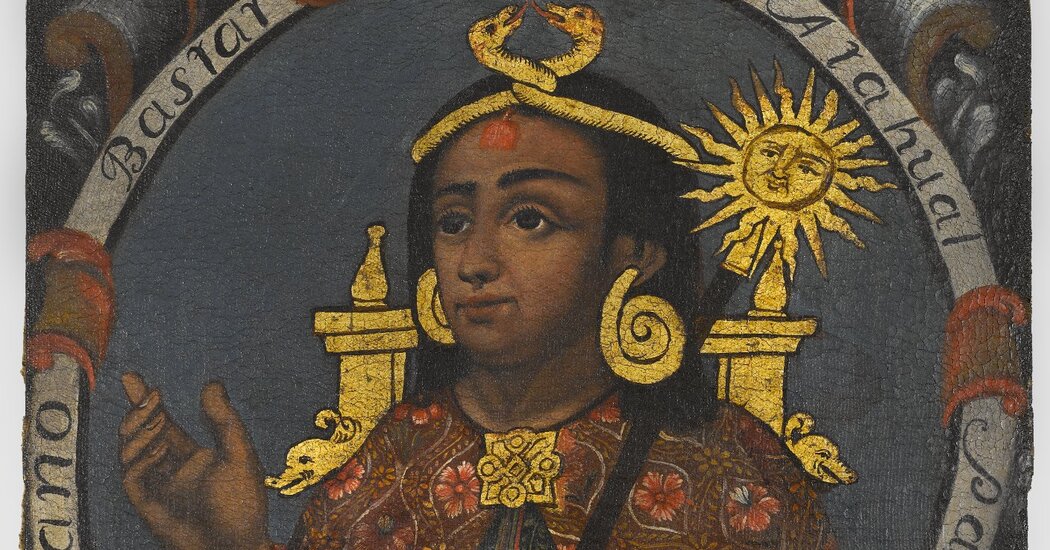 For his next feat, Laurent Binet should write a children’s book in Python code, or recreate the Bible as a cellphone contract, or translate Socratic dialogues into two dogs sniffing each other at the off-leash park. His debut, “HHhH,” was a meta-historiographical telling of the 1942 assassination of the alpha Nazi Reinhard Heydrich; its successor, “The Seventh Function of Language,” was a detective story about the sudden death of Roland Barthes that treated 1970s French literary theorists like louche rock gods and badass gangsters. His latest, which attests to his status as one of the most intellectually game writers of our time, is a totalized counterfiction of post-1492 world history.

“Civilizations” opens as a heroic Norse legend about the exploits of Freydis Eriksdottir. In Binet’s telling, she leaves behind her father, Erik the Red, to lead a 10th-century crew of loyal Greenlanders to Lambayeque, in northern Peru, where they settle peaceably with the locals. Moving ahead 500 years, Binet works up entries from Christopher Columbus’s God-besotted and misery-filled diary after he and his men cross the Atlantic and begin exploring the Caribbean, only to be fatally outmaneuvered by Taíno royals and warriors.

Then come the life and exploits of the early-16th-century Incan emperor Atahualpa. According to the established historical account, he was executed in Quito, present-day Ecuador, by the Spanish not long after defeating his own brother, Huáscar, in a continent-spanning civil war. In Binet’s version, young Atahualpa faces only his brother in this conflict and manages to escape Huáscar’s forces by boat. His companions: a pet puma, a small group of fellow Quitonians and the multilingual Cuban princess Higuénamota, his most beloved and politically astute wife. Inspired by distant memories of the otherwise forgotten Columbus, they sail east, eventually arriving in a strange new place: “All of them — men, women, horses, llamas — had survived the great sea. They had reached the land of the rising Sun,” otherwise known as Portugal.

Counterhistorical fiction can provide dopamine-like delights when a writer successfully reverse-engineers the established hierarchies and terms of conventional history, geography and intercultural encounter. The highborn newcomers from the west, a land known as the Four Quarters, first meet in the east lowly “men in brown and white robes, the tops of their heads shaved,” who “knelt on the floor with their hands joined and their eyes closed, muttering inaudible sounds.” A very different kind of believer himself, Atahualpa calls for a ritual burning of meat to honor his sun god. The dirty, sickly, starving locals, who, like the monks, worship a “nailed god,” are drawn by the smell, and to the pitying disgust of the Quitonians, devour the sacred offerings and anything else they can find. Sensing weakness and opportunity all around him, Atahualpa begins making moves.

The Incan’s success owes a great deal to Europe’s fundamental divisiveness, Atahualpa’s own temperamental pragmatism and a reconciliation with his brother, who agrees to support Atahualpa’s campaign to rule the new “Fifth Quarter” to their mutual wealth and protection. After a quick and merciless massacre in Toledo, with tolerance shown for minorities otherwise facing the terms of Inquisition-era Catholicism, Atahualpa takes over Portugal, moves on to Spain and then begins dealing as an equal or better with Italy, France, England and Germany, all variously caught up in the fractures of the Reformation and anxieties about encroaching Islam.

Deploying the dutifully admiring voice and stilted, decorous style of an unnamed historical chronicler, Binet recounts court intrigues, diplomatic negotiations, religio-political conflicts, military expeditions, major battles, alliances made and broken through money and marriage and regencies, and also the expenses and problems of governing ever more land and people. All the while, Atahualpa’s looking out for better deals, possible betrayals and new challengers. Countless ordinary people die along the way.

If Binet played around with literary forms, genres and voices in his earlier fiction, here he and his translator, Sam Taylor, adopt them more straightforwardly, to balance out his imaginative incursion against history itself, even if this means the book can often be boring. This is a defiant, purposeful, unapologetic kind of boring. The very nature of a comprehensive chronicle of large-scale geographic, political, financial, religious and lineal conniving and convolution is necessarily complicated and dry, whether as history or counterhistory.

Fortunately, Binet’s historical feints afford imaginative frissons and relief from paragraph after paragraph of dutiful play-by-play about an empire in the making. Thomas More and Erasmus of Rotterdam exchange spirited letters about the possible harmony between Atahualpa’s sun deity religion and Christianity, while fretting about Henry VIII’s temptation to leave the church for a faith that doesn’t worry much about divorce and remarriage. Needing money from the German über-banker Jakob Fugger, Atahualpa agrees to get rid of Martin Luther for him, which in turn leads to theatrical public disputations and to someone nailing the “Ninety-Five Theses of the Sun” to the wooden doors of a German Incan temple. Machiavelli’s writings prove crucial to Atahualpa’s strategies and success; Copernicus’s heliocentric treatise is very well received by a sun-worshiping royal patron; Titian makes a series of paintings of the emperor at important moments; Michelangelo carves a statue of Atahualpa’s beloved Higuénamota “that can be found today in the great temple in Seville.”

Eventually, Binet torques his own fabulist arrangement: Mexican colonizers arrive in northern Europe. They are already overwhelming Huáscar back in the Four Quarters and are keen to take over the Fifth, too. A whole new set of geopolitical reimaginings and gyrations begins, which, amid much else, eventually sends a downtrodden Cervantes to this novel’s Old World to become an indentured writer. Binet ends by slyly inviting us to imagine Don Quixote, tilting at Aztec pyramids. Bravo and all, but after 300 pages, the counterhistorical starts to lose its charge, more predictable than provocative.

Binet proves, however, more than only a Borgesian magician. As much is evident, for instance, in the letters Atahualpa exchanges with Higuénamota while the Mexicans are advancing across France and the emperor is losing battles and allies fast. They write with the high tone and reserved style befitting both their stations and Binet’s unstinting devotion to form and genre, but greater feeling nevertheless emerges. It’s the feeling two people have when they have gone through much together, only to discover that they are suddenly, decisively living through history — on the losing side.