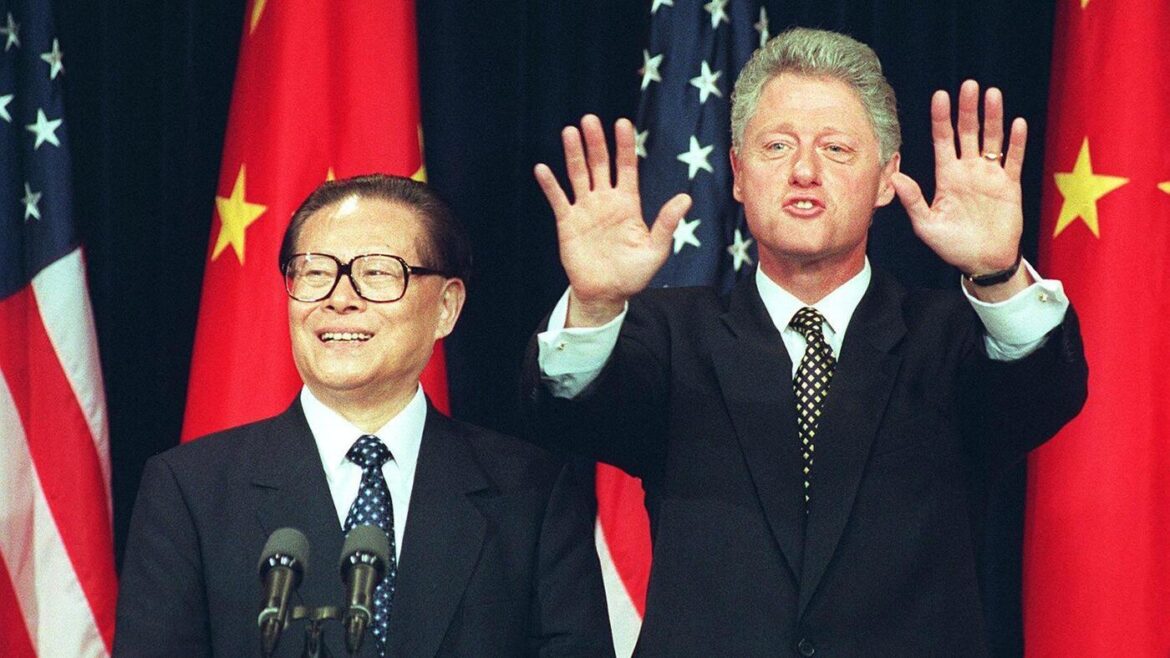 President Bill Clinton holds up his hands indicating no more questions as he and Chinese President Jiang Zemin hold a joint press conference in 1997 in Washington, D.C. Clinton confirmed that he agreed to lift a ban on the export of nuclear power technology to China. 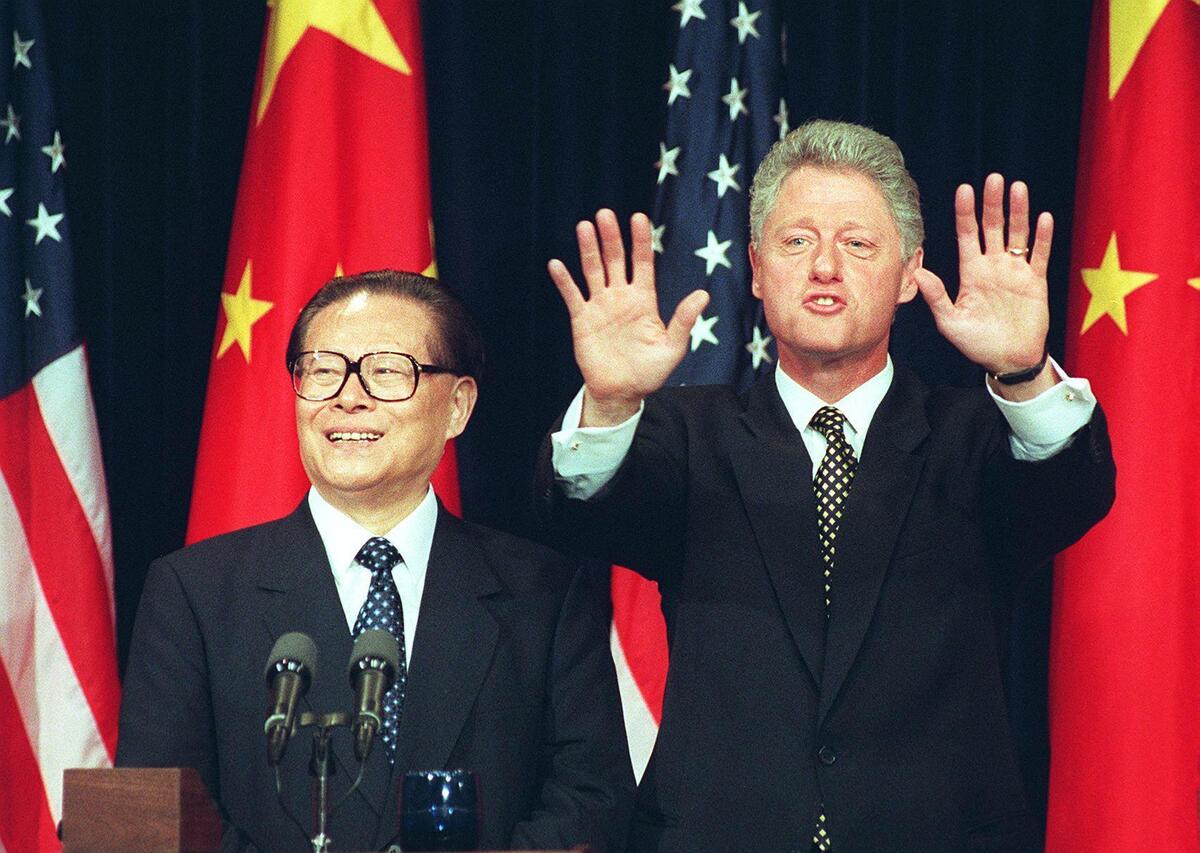 President Bill Clinton holds up his hands indicating no more questions as he and Chinese President Jiang Zemin hold a joint press conference in 1997 in Washington, D.C. Clinton confirmed that he agreed to lift a ban on the export of nuclear power technology to China.

SEOUL — House Speaker Nancy Pelosi’s plane touched down in Taiwan on Tuesday evening local time. Her visit sparked warnings from mainland China, and the risk of a fourth crisis in the area known as the Taiwan Strait.

China sees Taiwan as part of its territory, and the visit by Pelosi — the highest-ranking elected U.S. official to visit the island since House Speaker Newt Gingrich 25 years ago — as a breach of its sovereignty. It also sees it as a breach of Washington’s commitment to a “one-China policy,” recognizing Beijing as China’s sole legitimate government.

Chinese Foreign Minister Wang Yi railed at Washington in a statement Tuesday, saying its betrayal of China “on the Taiwan issue is bankrupting its national credibility.” Both the U.S. and China have stepped up military activity in the region ahead of the visit, with China’s Eastern Theater Command starting joint air and sea operations in all directions around Taiwan just minutes after Pelosi landed in Taipei.

How a crisis might play out remains a matter of speculation, but it would hardly be unprecedented. It would in fact be the fourth Taiwan Strait crisis, after similar incidents in 1954, 1958 and in the mid-1990s. 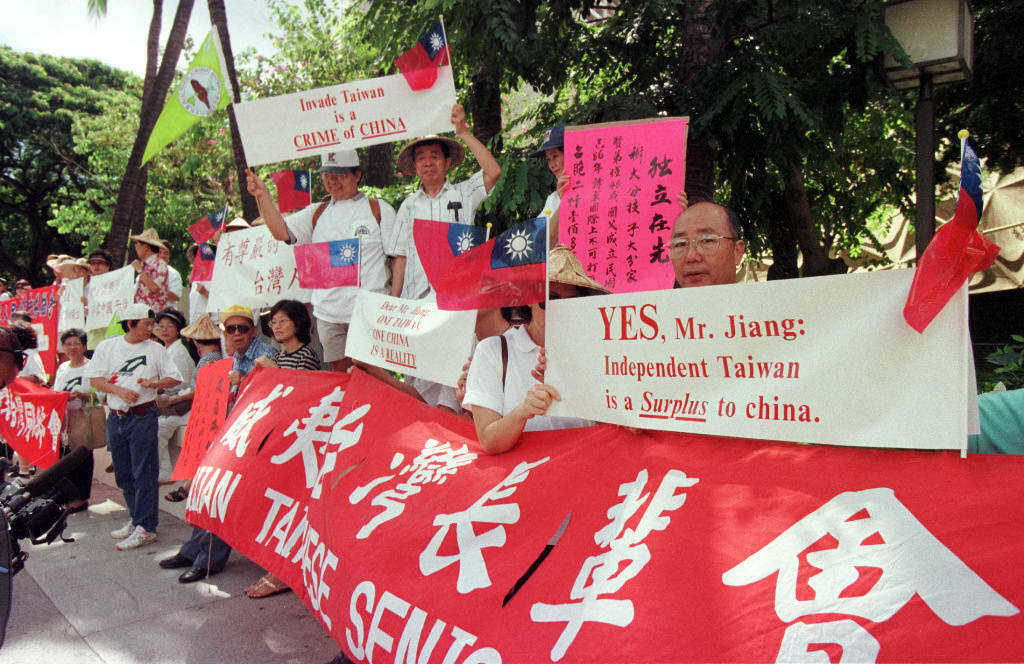 Protesters hold signs and banners outside Honolulu’s Hilton Hawaiian Village hotel, where Chinese President Jiang Zemin attended a luncheon with the mayor of Honolulu in 1997. The demonstrators shouted “Taiwan Yes, China No” as the presidential motorcade passed by. 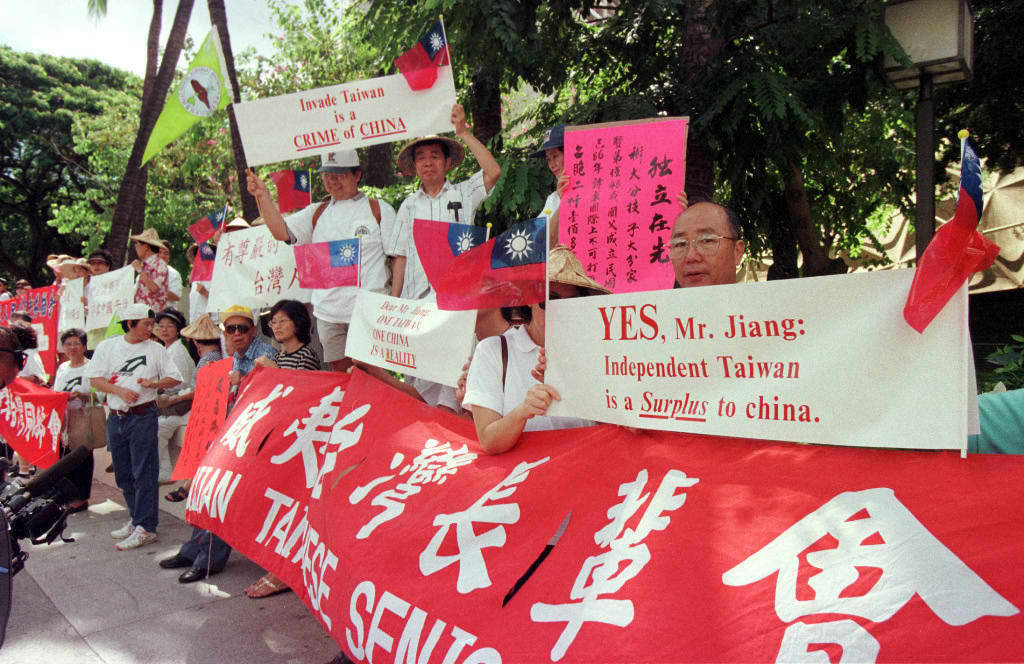 Protesters hold signs and banners outside Honolulu’s Hilton Hawaiian Village hotel, where Chinese President Jiang Zemin attended a luncheon with the mayor of Honolulu in 1997. The demonstrators shouted “Taiwan Yes, China No” as the presidential motorcade passed by.

In the first conflict, shortly after the end of the Korean War, Beijing tried to deter the Eisenhower administration from signing a mutual defense treaty with Nationalist Party leader Chiang Kai-shek, who had fled to Taiwan in 1949 after losing a civil war to Mao Zedong’s communists. The U.S. and Taiwan signed the defense treaty in 1954.

The U.S., meanwhile, tried both to keep communist forces from seizing Taiwanese-held islands of Kinmen and Matsu just off China’s southeast coast, which China bombarded with artillery.

“But what they also wanted to do,” Chong says, “was to restrain Chiang Kai-shek from trying to retake the mainland” with a counterattack.

A second conflict brought more shelling of the islands in 1958. The U.S. military planned the use of nuclear weapons against China to prevent the mainland’s takeover of the Taiwan-held islands of Kinmen and Matsu, but President Dwight Eisenhower rejected the idea.

Eventually, the two settled into an uneasy standoff, in which communists and nationalists shelled each other on alternate days. This face-saving ritual continued intermittently for some two decades. Then-Secretary of State John Foster Dulles characterized the alternate-day bombardment as a propaganda ploy that was “psychological and designed to create the impression they [China] are the masters.” 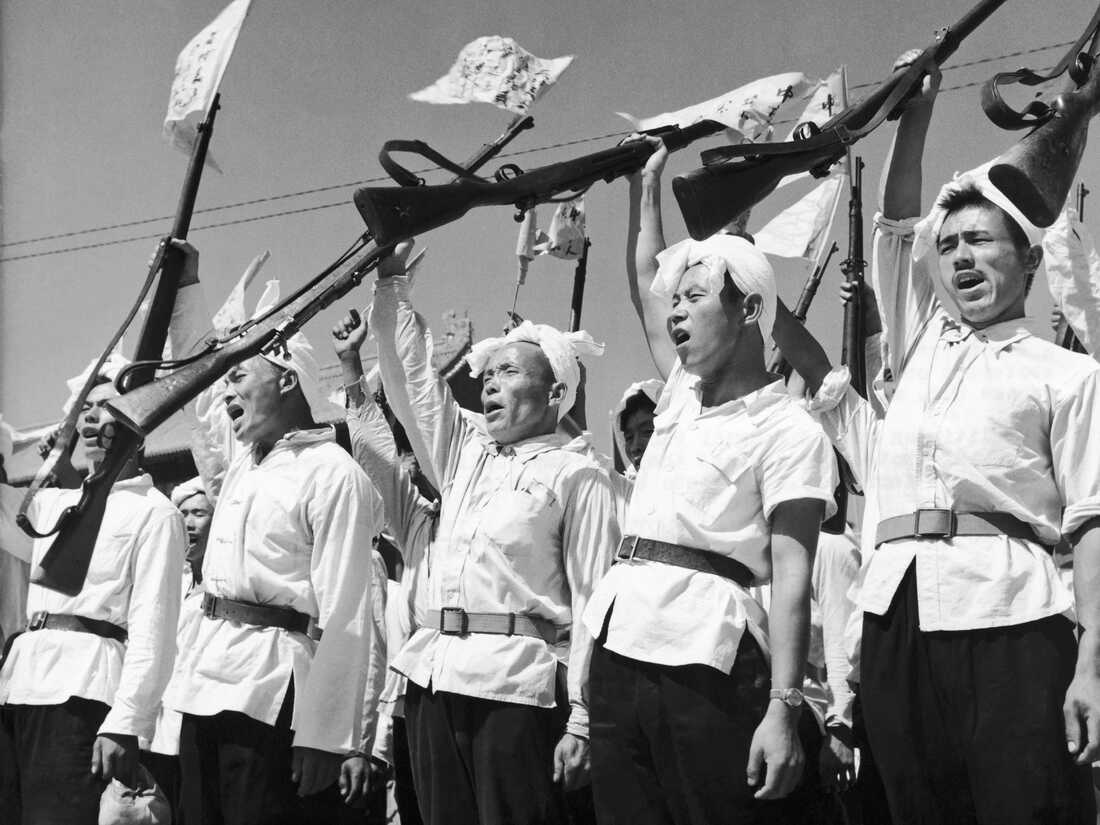 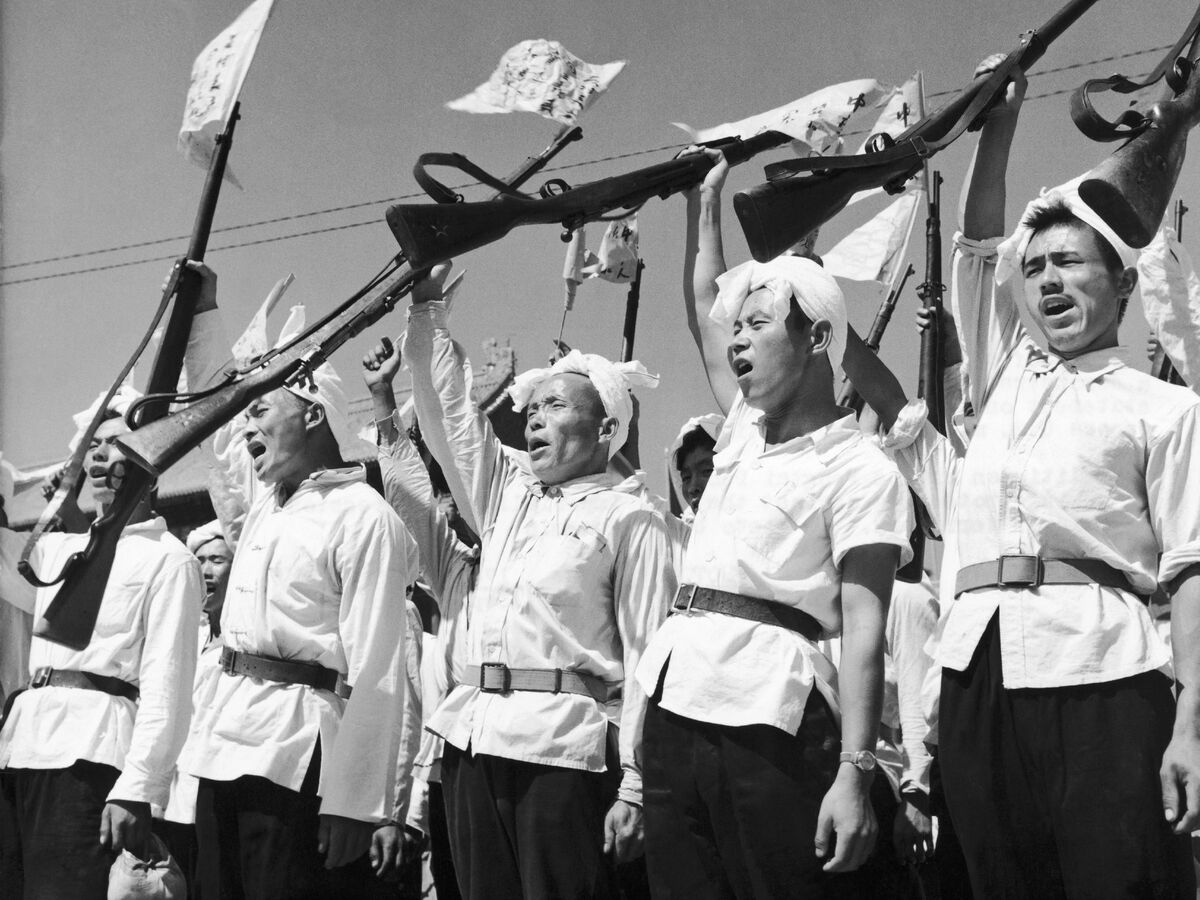 The third crisis erupted in 1995 over Taiwanese President Lee Teng-hui’s visit to his alma mater, Cornell University. The Clinton administration initially opposed the idea but was forced to relent following a Congressional resolution in support of the visit.

China responded with months of military exercises, including lobbing missiles into waters off Taiwan, and rehearsing amphibious assaults on the island. Beijing saw Lee’s U.S. visit as yet another betrayal of Washington’s commitment to the “one-China policy.”

Similarly, regarding Pelosi’s current visit to Taiwan, “Beijing believes that the U.S. is gradually hollowing out the one-China policy” and is trying to draw a line in the sand to deter Washington, says Qi Leyi, a Taipei-based military commentator and author of a book on the third Taiwan Strait crisis.

Beijing’s military muscle-flexing was also aimed at deterring Taiwanese voters from voting for Lee in the 1996 presidential elections.

The ploy backfired. The U.S. sent two aircraft carrier battle groups to waters near Taiwan. And Taiwanese voters chose Lee with a 54% majority, in the island’s first-ever direct presidential elections.

“The two sides, I think, were really chastened and sobered by how close they came to a major military encounter,” says Susan Shirk, who served as deputy assistant secretary of state in the Bureau of East Asia and Pacific Affairs after the end of the crisis. “And so then both sides really put a lot of effort into putting a floor underneath the relationship to prevent that from happening again.”

Shirk, the author of Overreach, on U.S.-China relations, adds, “If China hadn’t de-escalated, if they had responded by, let’s say, attacking or harassing the carrier battle group — that would have been very dangerous.”

The U.S. and China eventually stabilized ties, culminating in China’s then-President Jiang Zemin making a high-profile visit to the U.S. in 1997. The risk of a conflict between the U.S., China and Taiwan was high, however.

Now, a quarter of a century later, as the U.S. and China are facing off again on Taiwan, relations between Washington and Beijing are much more tense than they were in 1996.

“You’ve got this kind of mutually reinforcing dynamic going on between the two sides where they assume the worst of the other and they don’t believe what they’re saying,” says Michael Swaine, director of the East Asia program at the Quincy Institute for Responsible Statecraft. “It is a kind of strategic rivalry that can easily get out of hand.”

Another thing that’s different this time, Chong notes, is China’s leader. Xi Jinping’s ambition is to accomplish the “rejuvenation of the Chinese nation,” he says, restoring the nation to its regional primacy, which includes reunification with Taiwan.

Xi is “more personally attached to Taiwan policy than his predecessors. So anything that’s not going in the direction he wants may affect his standing, or at least his prestige,” Chong says.

And Xi commands a far more powerful military than China possessed in any of the past crises. That includes three aircraft carriers. Whether or not China would deploy them, with several U.S. warships already maneuvering around the region, is a hard question to answer. Analysts say Beijing is both trying to project military strength while avoiding provoking military escalation.

“If China lets Pelosi happen and not do anything, China risks looking weak, but at the same time, Xi really needs stability at the moment, and that’s why he doesn’t really have a going to war option as well, because war will be the biggest risk to stability,” says Wen-Ti Sung, a political science professor at the Australian National University. “It seems like he’s caught in a bit of a Catch-22.”

And if anyone has learned from past crises in the Taiwan Strait, Chong says, it’s the people of Taiwan, who “seem somewhat nonplussed” by the latest animus.

So, if Beijing “wants to send a message” to an island that is increasingly impervious to intimidation, Chong says, “it has to keep ramping up its threat every time, until it has to actually carry out that threat, or have its bluff called.”