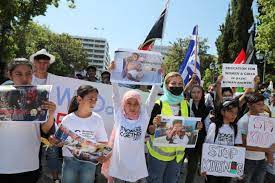 ATHENS (Reuters) – Hundreds of Afghans marched to the U.S. Embassy in Athens on Saturday, making a plea to the international community for peace and holding banners reading, “Afghanistan is bleeding” and “hands off our land.”

As it neared the end of a 20-year military engagement in the country, the United States said it had killed two Islamic State militants planning attacks in Afghanistan, following a deadly suicide bombing outside Kabul airport on Thursday.

Other protesters shouted, “stop killing Afghans” and “we want justice.”

Greece was the frontline of a migrant crisis in 2015 when more than a million people, most of them Syrians, Afghans and Iraqis, arrived seeking refuge. Many of them still live in Greek camps, waiting for their asylum applications to be processed.

Fearing new migrant flows from Afghanistan, Greece has completed a 40-km fence on its border with Turkey and a new surveillance system was in place to stop possible asylum seekers from trying to reach Europe.

“We are here in order to be the voice of voiceless people in Afghanistan that are trapped,” said Parwan Amiri, 17, who lives at a migrant camp outside Athens and whose parents and sister are still in Afghanistan. “More than ever we are thinking that we don’t have a land, we don’t have a homeland.”

European Union home affairs ministers will hold a special meeting on Tuesday to discuss the latest developments in Afghanistan and its consequences for security and migration in the 27-nation bloc.